Sometimes, “stablecoins” and variants such as “algorithmic stablecoins” function like historical names, as they refer to projects that call themselves stablecoins, such as Basis Cash, Elastic Set Dollar, Frax and their clones.

The word “stablecoin” can be used as a logical description for “a cryptocurrency designed to have low price volatility” and has “stores of value or units of account,” or “a new type of cryptocurrency that often have their value pegged to another asset… designed to tackle the inherent volatility seen in cryptocurrency prices,” or a currency that can “act as a medium of monetary exchange and a mode of storage of monetary value, and its value should remain relatively stable over longer time horizons.”

On the more metaphysically speculative end, some have defined a stablecoin as “an asset that prices itself, rather than an asset that is priced by supply and demand. This goes against everything we know about how markets work.” 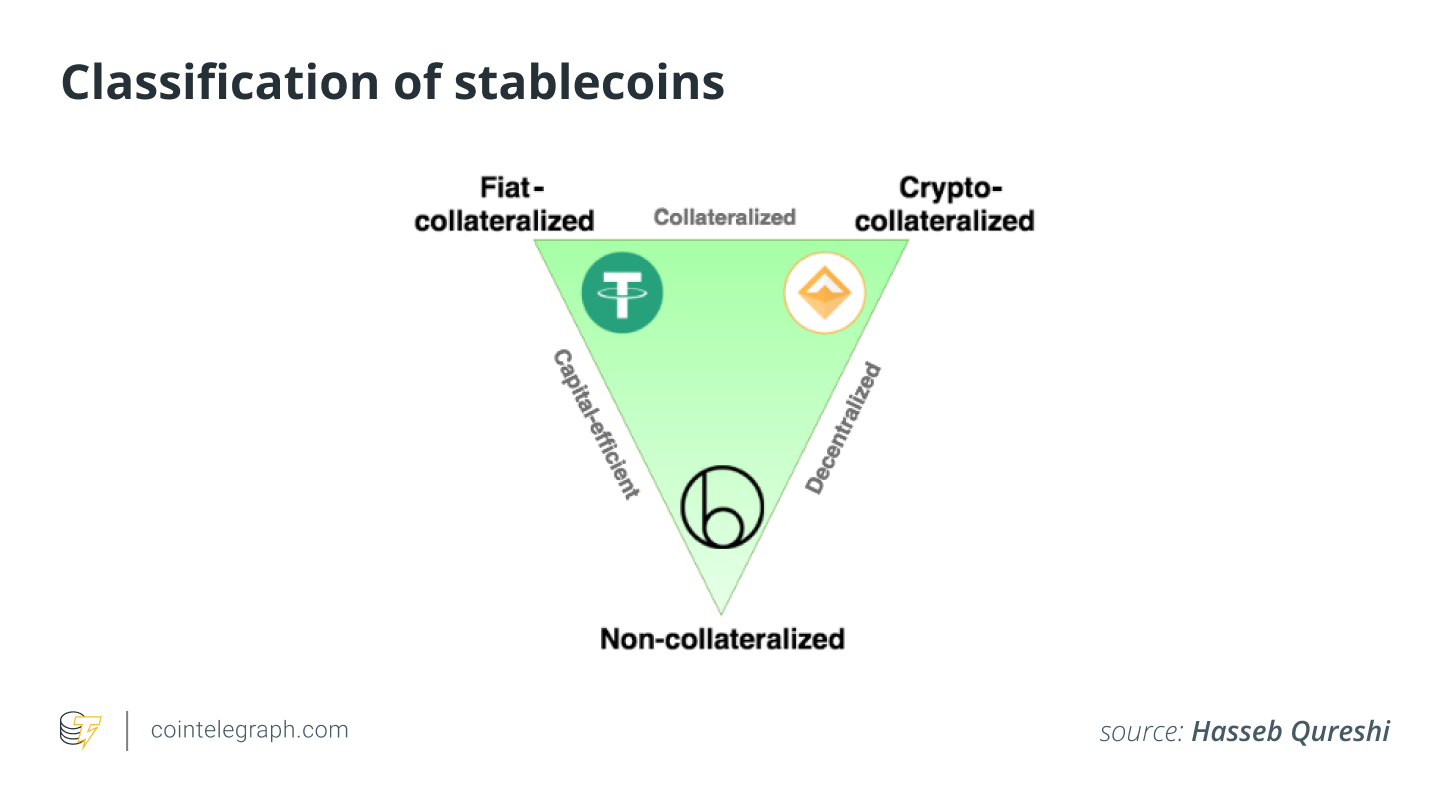 Circularity is the core issue, as I see it. The alleged deficiency of Bitcoin (BTC) as money and a vague definition originally inspired a host of stablecoin projects. The design features of these projects have now been incorporated back into the stablecoin definition.

Haseeb Qureshi — a software engineer, author and famous altruist — defines a stablecoin as simply a price peg. Yet, it is not obvious that anything with a peg should bear the name of stablecoin. Ampleforth has a “peg” and has been bucketed into the stablecoin category. The founding team routinely clarifies that it is no such thing.

So, who is right?

Another example of just what exactly is “stable” in a stablecoin — the peg or its value? Wrapped Bitcoin (wBTC) is perfectly pegged to Bitcoin — one wBTC will always be one BTC. Is that a stablecoin?

According to the original motivations for creating stablecoins, BTC is not a stable means of exchange, even though Bitcoin is the canonical “store of value” asset.

Having clarified the problem — that no one knows how to define or recognize a stablecoin — the rest of this essay outlines a solution. It provides a well-defined description of value as a relational property, namely, “value in terms of a measurement unit.”

Using this description, I then comprehensively classify all digital assets along two dimensions — risk of loss, or the probability of realizing a decrease in value, and risk of gain, or the probability of realizing an increase in value. We can then precisely and logically define stablecoins: assets where the risk of loss and risk of gain are both zero.

I call this a risk-defined stablecoin.

It is clear that today’s algorithmic stablecoins have a risk of loss but no risk of gain. Thus, not only are they not stablecoins, but they are terrible financial assets. I finish by considering whether it makes sense to expand the concept of a risk-defined stablecoin to a more general concept centered on expected value; an expected-value stablecoin is one where the probabilities of loss and gain, weighted by the magnitude of loss and gain, are perfectly offset and net out to zero.

I conclude that the complexity and ergodicity of such a concept rule it out as a useful stablecoin definition.

What “value” means is not entirely clear, as evidenced by continuing debates about the “true” rate of inflation. We can ask: Value in terms of what?

That is, we decide to treat value as a relational property between the object being measured and the thing doing the measuring. It is like asking for height — do you want it in inches or centimeters? For our purposes, can we define a function that maps an asset to a set of numerical values in a chosen unit? I call it: Value.

For example, if the chosen unit is the U.S. dollar, and the item is a bag of chips,

We could just as well have written Heightinches(table)=35in.

Risk of loss, risk of gain

We can define risks as the probability that, at a randomly chosen time in the future, the Value function would show a decrease or increase in value.

In practical terms, this means that if I convert the asset into my chosen unit, I would realize a loss or a gain.

We now have enough to create a well-defined description for a stablecoin. A stablecoin is an asset where the risk of loss and the risk of gain are both zero. That is: p(gain)=p(loss)=0.

This means that if I sell the stablecoin asset in the future, I will neither experience a loss nor gain in value, as measured in my chosen unit. 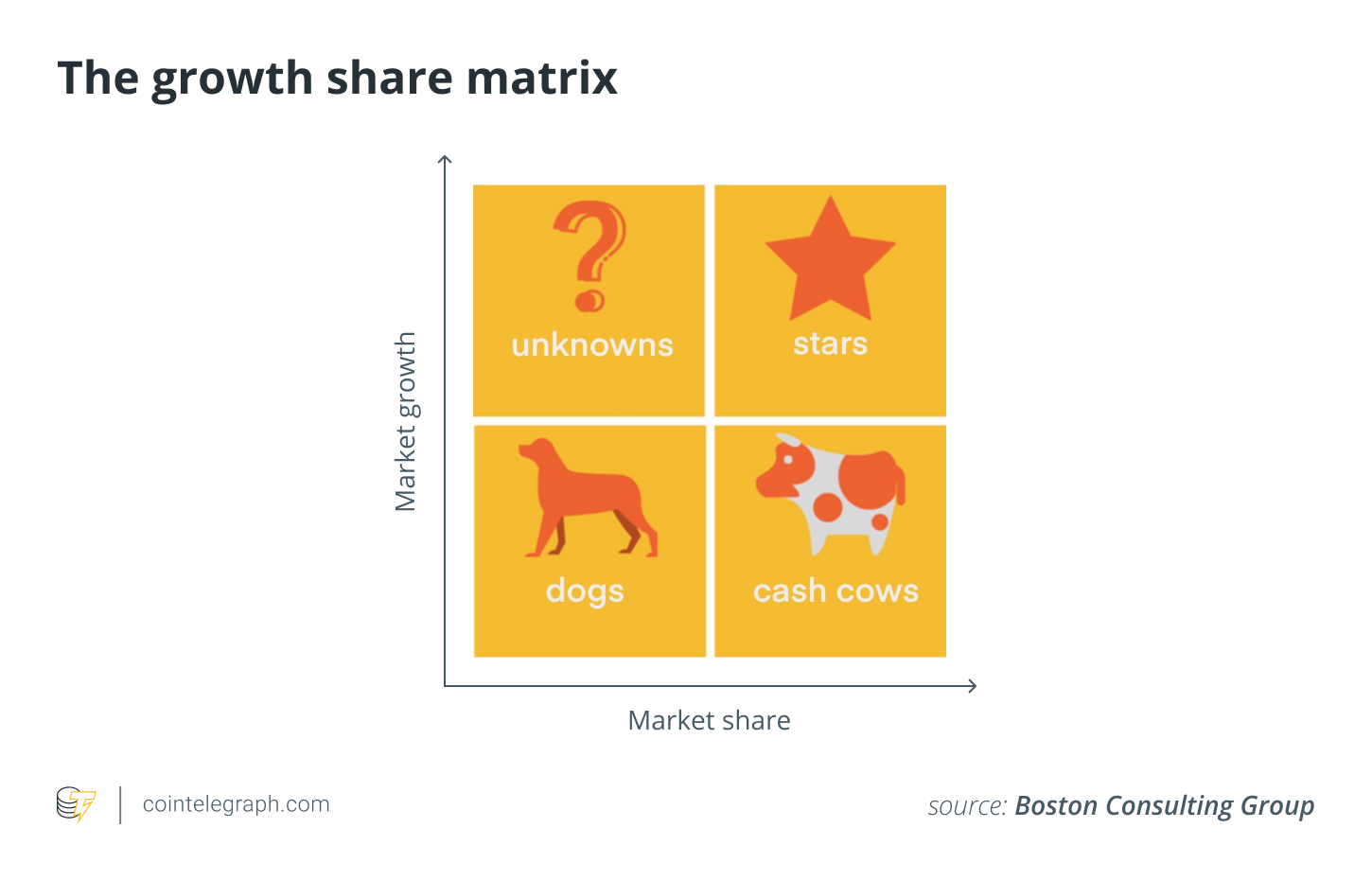 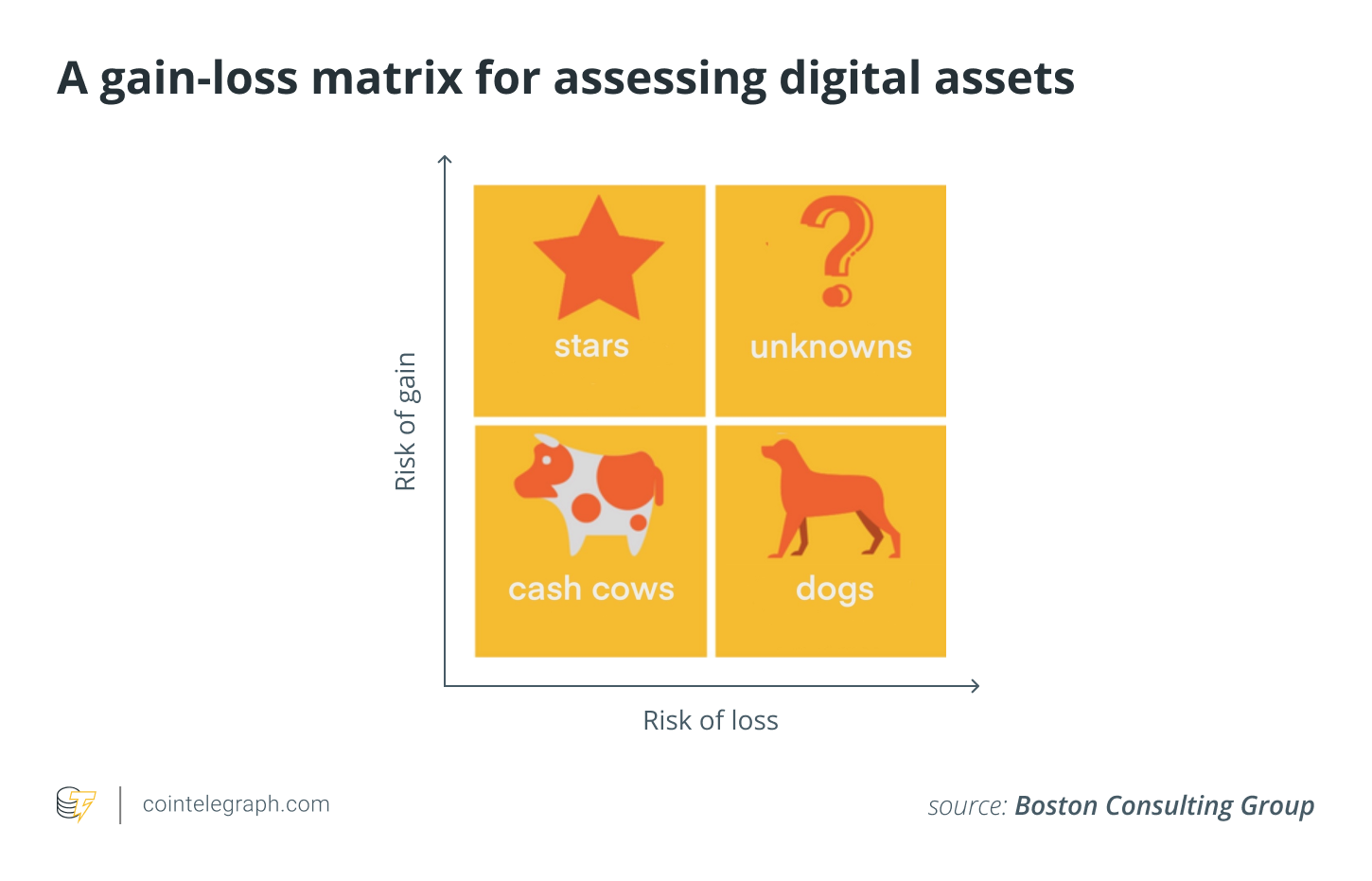 A star investment, with no risk of loss but a risk of gain, is rare nowadays but abundant in hindsight, such as when one regrets selling Bitcoin back in 2010. Stars also exist in the imagination. Such was the case with the investors in Bernie Madoff’s fund. But those kinds of investments quickly reveal themselves to be dogs. Dogs are sure losers — there is no risk of gain, but if you hold them long enough, the risk of loss becomes an actual loss.

Star investments are most abundant in hindsight when we can no longer buy them:

I’d be a *billionaire* now if I hadn’t sold the 55,000 bitcoins I mined on my laptop in 2009-2010 way too early (mostly before 2012). That is regretful, but then again, with the early bitcoiners we set in motion something greater than personal gain.

Unknowns are your regular investments — you could be up or down in terms of value, depending on the day. Most digital assets, even Bitcoin, fall into this category. Lastly, cash cows are investments that have minimal risk of loss or gain. They are dependable. We can now take those projects that have been named as stablecoins to see which truly fit.

Let’s put some major digital assets and stablecoins into the gain-loss matrix. 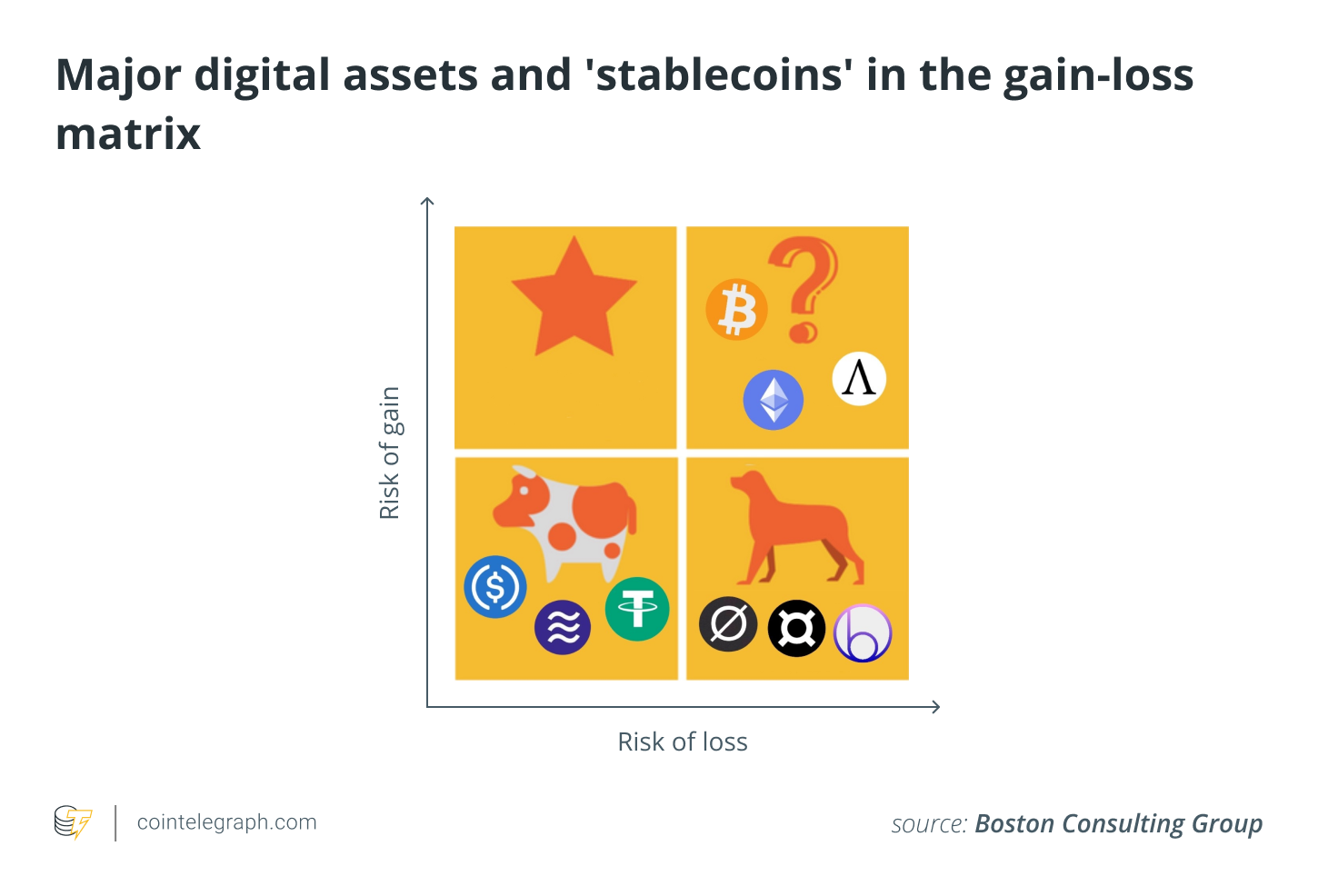 Projects called algorithmic stablecoins are stablecoins in name only. Because of their multiple token designs, they have no risk of gain — as all of the new supply is given to investors — but holders retain a risk of loss.

Price peg is not enough. The expected value of owning an asset could be positive or negative, but it is not zero. Another lesson is that it is important to specify a unit when discussing value. If our measurement unit is the U.S. dollar, then wBTC is not a stablecoin. But if we are defining value in terms of BTC, then wBTC is the perfect stablecoin.

Lastly, risk assessment is hard. I’ve received pushback about classifying Tether (USDT) as a stablecoin, given its counterparty risk.

These are all valid points.

Except under extraordinary circumstances, no stablecoin is truly free of the risk of loss. Perhaps Tether is a cross between a dog and a cow.

Nonetheless, it should be clear that certain projects egregiously appropriate the term “stablecoin” in a bid to grant investors a risk of gain while saddling holders with a risk of loss. Since no sane person would hold these assets on their books, however, it is almost certain that these dogs will go extinct.

Astute readers will have noticed that expected value is not just a function of the probability of loss and gain — the magnitude of losses and magnitude of gains is just as important.

For example, assume I have a fair die. If I roll a six, I win $60. If I roll any other number I lose $6. The expected value of rolling the die is:

But can we expand the concept of a risk-defined stablecoin into that of an expected-value stablecoin? In other words, would it suffice for the expected value of holding an asset to be zero? Using the die example above, this condition would be met if I won only $30 instead of $60. So, any time I try to convert this “DieCoin” into U.S. dollars, there is a five-sixth chance I will realize a loss in value, and a one-sixth chance I will realize a gain. But because the gain is so much larger than the loss, these cancel out.

I think this could be a clever approach that can be realized through a set of derivative contracts. However, it would lose the property of allowing holders to exit their position with minimal impact to their portfolios.

This should remind us that, ultimately, definitions are artifacts of a community of speakers. And I find it doubtful that more than a few people will find an expected value definition persuasive.

This article does not contain investment advice or recommendations. Every investment and trading move involves risk, and readers should conduct their own research when making a decision.