Bitcoin (BTC) price appears to have flipped the $32,000 level back to support as the wider cryptocurrency market saw renewed optimism on Jan. 28.

Data from Cointelegraph Markets and TradingView shows that BTC has steadily climbed higher in price from $31,000 to its current value of $33,400, an increase of 9.5%.

The most notable gainer of the day was Dogecoin (DOGE) which surged more than 200%.

A lot of you are talking about Dogecoin. What’s that? A meme crypto?

According to data from TheTIE, the tweet volume for Dogecoin “surpassed Bitcoin over the last 24 hours,” making this the first time on record that “an altcoin has been tweeted about more than Bitcoin over a 24 hour period.” 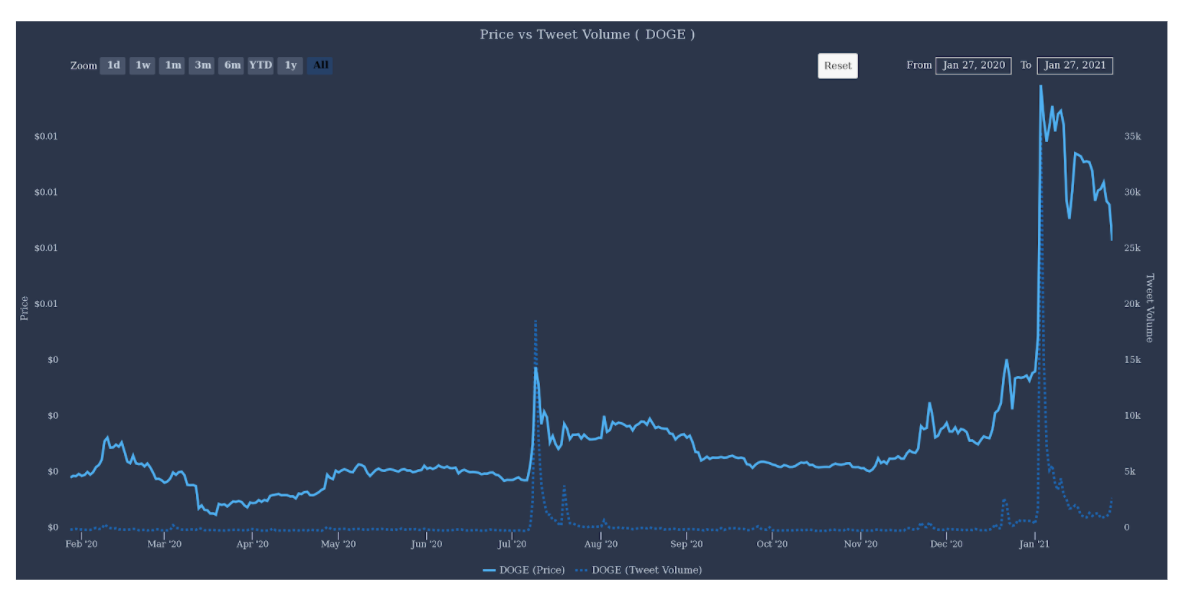 In a private conversation with Cointelegraph, Joshua Frank, founder of TheTIE, commented on just how “wild” the activity related to Dogecoin has been over the past 24-hours.

Coinbase officially unveiled its plan to go public later this year. According to Coinbase Blog, the company will do a direct listing of its Class A common stock, making existing shares available to the public.

North Carolina wealth manager Kingfisher Capital also made headlines after filing documents revealed that the firm had purchased 10,667 shares of the Grayscale Bitcoin Trust over the past few months.

Several brokerage firms in the United States, including the popular mobile-based Robinhood, are receiving blowback for halting trading on stocks like GameStop (GME) and AMC Holdings Inc. (AMC), which has been the primary story of the week after a retail investor-inspired short squeeze by members of the Reddit group r/wallstretbets pushed the prices of each stock up by hundreds of percent.

The traditional markets also saw a bounce following a minor sell-off yesterday. The S&P 500, NASDAQ and Dow all saw positive inflows and finished the day up 0.98%, 0.68% and 0.99% respectively.

Bitcoins show of strength at the $32,000 coincided with a strong rally from many altcoins and currently the majority of the top 100 coins are reflecting 3% to 15% gains.

Does the future of DeFi still belong to the Ethereum blockchain?
Bitcoin ignores Lindsay Lohan's 'To the moon' tweet as BTC price dips 7.6%
Ethereum is eating the world — ‘You only need one internet’