Bitcoin (BTC) hit yet another all-time high on Feb. 19 as the largest cryptocurrency set its sights on becoming a trillion-dollar asset. 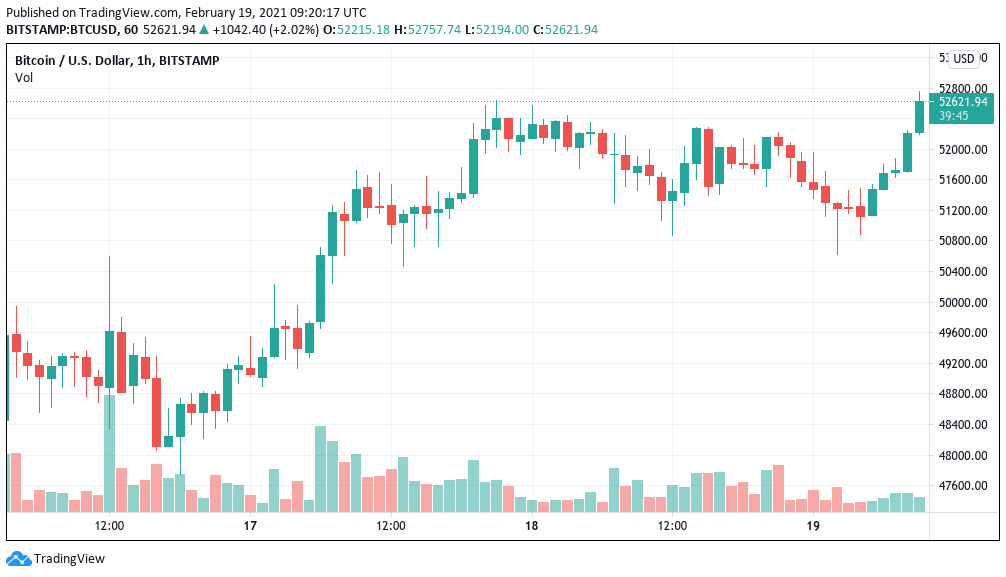 Data from Cointelegraph Markets and Tradingview showed BTC/USD reaching $52,932 on Bitstamp at the time of writing after rising % in an hour.

Holding $50,000 support over the past two days, Bitcoin was primed for further gains in the short term, analysts believed, with one area in particular capturing hodlers’ imagination.

At around $53,600, Bitcoin’s total market cap will pass $1 trillion for the first time in history.

“It is simple. In the old world your money loses value, because governments debase currencies to fund their warfare & welfare state,” quant analyst PlanB summarized on Friday.

“In the new world #bitcoin increases in value, because math caps the monetary base at 21M BTC. The new world is eating the old world right now.”

According to data from on-chain monitoring service Bybt, Feb. 19 saw a 1,672 BTC top-up of Grayscale’s flagship fund, which now contains a total of just over $34 billion.

With the latest buys, Grayscale’s total assets under management (AUM) passed $40 billion for the first time. Second to Bitcoin is the firm’s Ethereum Trust, which contains almost $6 billion of ETH.

“AUM has doubled since 1/1/2021,” CEO Michael Sonnenshein confirmed on Twitter this week.

Grayscale’s Bitcoin purchases have cooled off in recent weeks, failing to match the size or frequency seen at the start of the year. At the same time, Ether purchases reappeared in February after a two-month hiatus.

The moves come as the activity among institutions shows no sign of abating more broadly. MicroStrategy, which already owns over 70,000 BTC, confirmed this week that it would raise $900 million specifically to increase its holdings further.

Comments from BlackRock, the world’s largest asset manager with around $7 trillion AUM, also appeared to suggest that it was interested in interacting with Bitcoin in some capacity.

What is wrapped Ethereum (wETH) and how does it work?
Ethereum’s Merge FOMO isn’t priced in, making a spike to $2.6K a possibility
Ethereum bulls aim to flip $2.8K to support before calling a trend reversal