Reserve currency is money held by central banks or treasuries usually for international transactions. Argentina is not going to be able to purchase a Boeing 737 MAX passenger jet, for example, with its highly inflationary peso; it will have to pay with U.S. dollars, which is why Argentina keeps dollars on hand — i.e., in “reserve.”

A second basic function is to support the value of a national currency. If the Brazilian real, for instance, plummets during an economic contraction, Brazil’s central bank could bid it up again by purchasing reals with dollars that it holds in reserve.

Could Bitcoin (BTC) fulfill these key functions of a reserve currency? “I certainly think so, in the future at least,” Franklin Noll, a monetary historian and the president of Noll Historical Consulting, told Cointelegraph. Bitcoin’s electronic nature makes it well suited for settling payments. “If gold was used in the past to do so, this digital gold should do the job as well, if not better.”

Meanwhile, these are unusual times. When markets crashed amid the COVID-19 crisis in March, Bitcoin followed suit. “BTC did not perform well,” Sinjin David Jung, managing director at International Blockchain Monetary Reserve, told Cointelegraph. But in early 2021, the world is facing a different circumstance, one marked by extensive stimulus spending — especially in the United States — and if the dollar falters, according to Jung:

“BTC’s position is almost like the ‘last resort reserve currency’ in holding value if the increase of the U.S. dollar supply becomes the only tool for avoiding financial depression while paradoxically resulting in supercharging the market.”

“The U.S. dollar is still king”

But challenges remain, and Bitcoin probably won’t supplant USD anytime soon. Said Noll: “The current problem with Bitcoin — as with gold — is that few, if any, goods or debts are denominated in Bitcoin.” Furthermore, according to him: “It’s hard to see a future where a significant amount of the world’s trade is denominated in Bitcoin. The U.S. dollar is still king.”

Jonas Gross, project manager at the Frankfurt School Blockchain Center — a think tank associated with the Frankfurt School of Finance & Management — sees little chance that BTC will be used as a reserve currency by any industrialized country in the near future. “Skepticism remains very high,” he told Cointelegraph, referring to a recent statement made by European Central Bank president Christine Lagarde that called for global regulation of BTC because of money laundering concerns, among others.

That said, “the U.S. dollar’s dominance as the world’s reserve currency could indeed be threatened,” continued Gross. China is in advanced testing of its central bank digital currency — i.e., its digital currency/electronic payment project — which could be launched as early as 2022, and foreigners might be allowed to access and use it for transactions. In that event, Gross added:

“It would be possible to use a digital version of the yuan for global payments easily and conveniently — transaction costs could be reduced, and the digital yuan would ‘flow across borders’ quite easily.”

Campbell Harvey, professor of international business at Duke University, told Cointelegraph that as the rates of borrowing in the United States rise, “the riskier it [USD] becomes as a reserve currency. At some point, it is too risky, and alternatives are sought.” Indeed, economic history teaches that global reserve currencies do not last forever.

In August, business intelligence firm MicroStrategy announced that it had adopted Bitcoin as its primary treasury reserve asset. At the start of 2021, former Canadian prime minister Stephen Harper raised the ante, suggesting that not only companies but governments might use crypto as a reserve, albeit as part of a “basket of things” that also included gold and fiat. 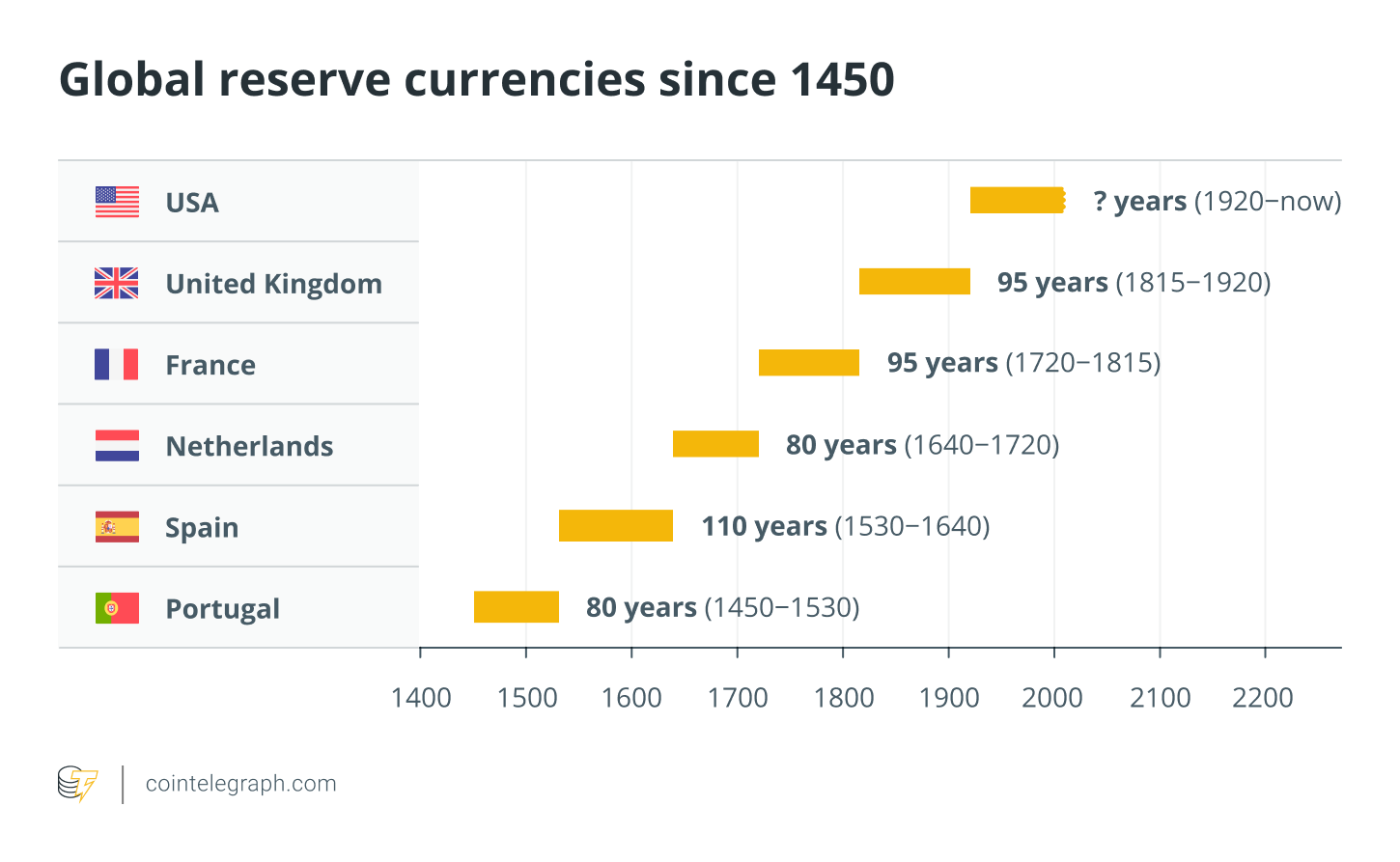 There have been six major world reserve periods since 1450, with an average span of about 94 years. The U.S. dollar has already been the world’s reserve for 100 years, surpassing the average, and is nearly equal to its predecessor, the British pound, which dominated for roughly 105 years.

BTC by itself is unlikely to become a reserve currency because of its extreme volatility, though, Harvey said. “Currently, the USD volatility versus 10 leading currencies is about 3%–4% per year. BTC is in the range of 80%–90%.” Gold, he added, has an annual volatility of about 15%.

Part of a basket?

On the other hand, cryptocurrencies could be used as part of a basket in the future, added Harvey. “It would unlikely be a single cryptocurrency in the basket. By the time this happens, all major central banks will have their version of a cryptocurrency.”

The idea of a diversified basket is not new, continued Harvey, referencing F. A. Hayek’s 1943 Economic Journal paper titled “A Commodity Reserve Currency.” Still, “there are plenty of issues: What assets do you use and what are the weights?” Also, who actually determines the weightings and if and when an asset is to be added or dropped?

“Bitcoin could indeed be used as part of a ‘basket of things’ as a hedge against inflation and political turmoil,” Gross said. One already sees BTC being used as a corporate treasury reserve, he added, mentioning MicroStrategy. Noll, too, viewed some corporations’ recent embrace of Bitcoin as a treasury reserve as a significant development:

José Parra-Moyano, assistant professor at Copenhagen Business School, told Cointelegraph: “It could be that if Bitcoin or other cryptocurrencies establish and continue showing technical security, central banks will incorporate them to their reserves.” But maintaining technical security over time won’t be easy, he suggested.

Is the infrastructure sufficient?

Is BTC’s infrastructure anywhere close to ready? Jung told Cointelegraph: “At this point, only BTC [among cryptos] could be considered a contender for the last resort reserve currency”; its transparency, simplicity and track record “clearly show it to be engineered for this function.”

“There are indeed some hurdles to overcome,” according to Gross. “Lower volatility and higher speed — e.g., implemented through the Lightning Network — would increase BTC’s attractiveness.” Furthermore, he outlined that efforts to educate regulators about cryptocurrencies should be improved so that they understand the potential of the technology “from a portfolio diversification perspective.”

Other potential obstacles are Bitcoin’s “newness” — it has only existed for 12 years — noted Harvey, as well as its still-limited adoption, vulnerability to manipulation — “see the academic evidence on USDT and BTC” — and also vulnerability to algorithmic attacks, “a 51% attack is costly but feasible.” Harvey added:

“Central banks don’t like it because it’s deflationary, and the algorithmic nature of the money creation usurps their economic influence — of course, this last point is also a selling point.”

Jung believes that the often-cited volatility flaw is exaggerated. BTC can’t help but be volatile in the process of its positioning as the last resort reserve currency. It will “continue to be volatile until the conditions are met when the U.S. dollar value starts to consistently drop even as the excess U.S. dollars are fueling greater market gains.”

Finally, in asking about BTC’s potential as a reserve currency, it is assumed that there will always be the need for such a reserve. Harvey, for one, isn’t so sure. “Why do we even need a ‘reserve’ currency?” he asked. “In the future, everything will be tokenized. To pay for something, you will have your choice what to pay in — e.g., BTC, gold, IBM stock, etc. Users will have easy access to millions of cross rates and will be instantly able to ‘pay with whatever asset you choose.’”

“Inherently when you speak about a reserve currency, it is all about long-term stability and competitiveness,” said Jung. “As such, the U.S. dollar will always act as the world’s primary reserve in times of geopolitical uncertainty. But what happens when the world and the U.S. dollar is in a continual state of quantitative easing?”

In that event, all bets are off, and national governments, beginning with smaller countries, might indeed gravitate to a basket of hard and digital assets as their reserve currency of “last resort.” Crypto and blockchain proponents will just have to continue spreading the word and hope that BTC or any other cryptocurrency will eventually become mature and worthy to take up the mantle of a commonly accepted reserve.