Institutional investors are rapidly gobbling up Bitcoin, and at the time of writing, nearly 3% of the Bitcoin (BTC) in circulation are locked up in long-term holdings by these investors.

Data shows that 24 entities have amassed more than 460,500 BTC, which is equivalent to $22 billion at Bitcoin’s current price.

According to Michael Novogratz, this figure excludes the 3 million BTC forever lost, who estimates that a supply shortage could occur shortly if institutions keep up their current buying spree.

Analysts now expect that holding Bitcoin in treasury will soon become a corporate standard as there are multiple technical reasons for viewing Bitcoin as an inflation hedge.

First, BTC has a finite supply in circulation, mimicking gold’s store of value use. Furthermore, there is no way to accelerate Bitcoin’s new supply through additional mining.

Large holders further reduce the circulating supply by buying significant quantities from the market and placing them in cold storage. This long-term holding culture among most crypto participants reduces the already small supply, creating a vicious circle.

For savvy chief financial officers, having a portion of Bitcoin’s treasury provides some regulatory hedge and arbitrage as governments cannot freeze funds.

What is surprising about Tesla’s decision to buy Bitcoin is the timing, as the decision happened after the BTC price hiked 250% in four months. 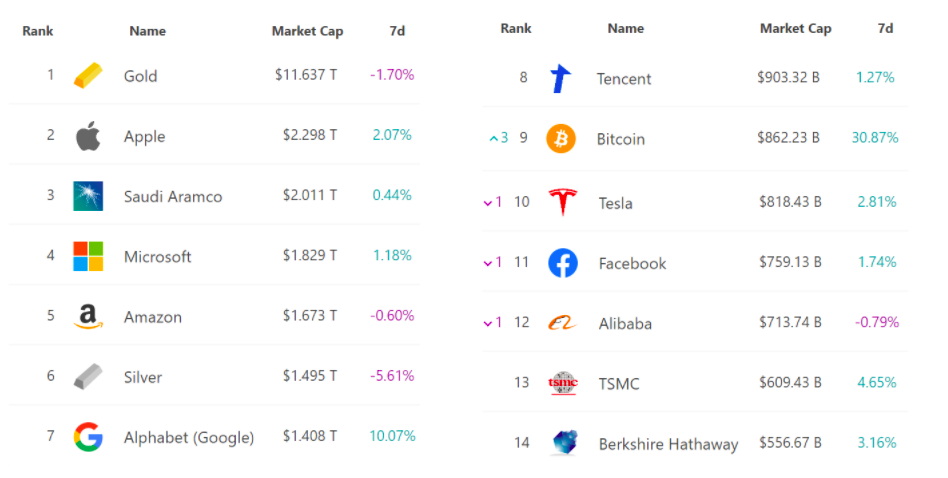 In the past, buying Bitcoin may have been viewed as an incredibly bold move, but now it’s becoming common sense for institutional investors.

With about a rough estimate of $10 trillion of corporate treasury worldwide, even a 3% allocation into BTC represents $300 billion, which is about a third of Bitcoin’s aggregate value in liquid cash.

Considering that over 60% of the Bitcoin supply hasn’t moved in more than a year, a $300 billion inflow is nearly unimaginable for an asset with a $355 billion free float.

Moreover, newly minted BTC by miners adds up to 341,640 annually, a mere $16.3 billion. Therefore it is safe to conclude that the steady allocation of BTC to corporate treasuries could more than double the current price of Bitcoin.