Within the last hour, Bitcoin’s market capitalization pushed above the $1 trillion level. This milestone occurred less than a year after its market cap dipped below $100 billion on Black Thursday and the move to a new all-time high took place right as BTC price is on the verge of overtaking $55,000. 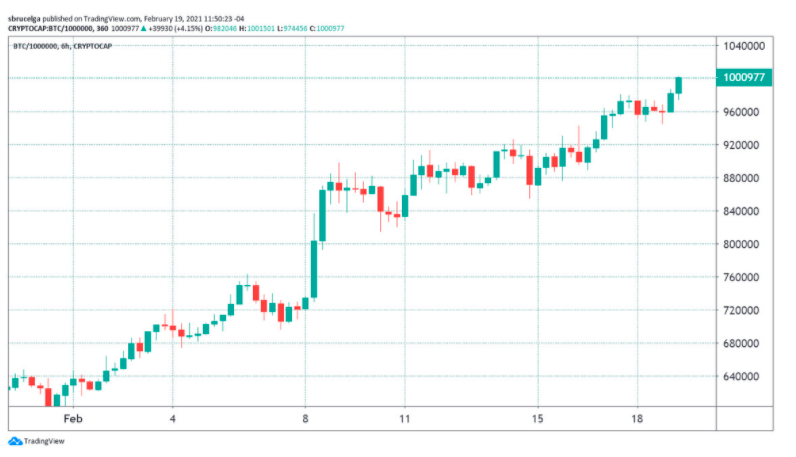 The significance of this event will not be lost of those working in financial as only a handful of assets ever achieve this status. While Bitcoin may have started as a mere curiosity in 2009, it only took it 12 years to become a global asset with a $1 trillion market capitalization.

For those unfamiliar with Bitcoin’s unique price history, 10,000 BTC were auctioned at the Bitcointalk.org forum in March 2010 for $50, but no buyer was found.

Two months later, Laszlo Hanyecz bought two pizzas for 10,000 BTC, and the rest is history. Thus, during its first sixteen months of existence, Bitcoin was something between a collectible with no monetary value and an experiment among enthusiasts.

Gold and silver have a much longer history 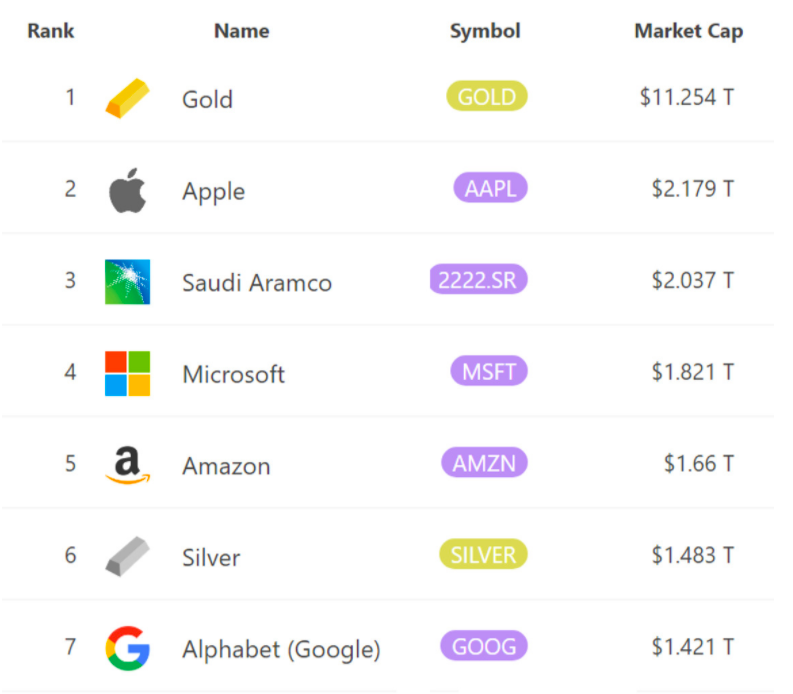 According to 8marketcap, besides Bitcoin, there are only seven tradable assets with a market capitalization surpassing $1 trillion. Naturally, gold and silver are on this list as they are synonyms of money and have served as a store of value for over 4,000 years.

Although extinct from coinage and reserve requirements to back fiat currency, gold remains widely used by central banks, mutual funds, and retail investors. While precious metals have the advantage of having a relatively constant supply, many company’s abilities to generate profits are evolving.

Amazon, for example, was founded in July 1994 as an online marketplace for books. Today, the giant conglomerate profits from cloud computing, digital streaming, film and television productions, gadgets, supermarkets, e-commerce and artificial intelligence.

In June 1996, Amazon raised $8 million in seed money from Kleiner Perkins and in that same year the company had lost $5.8 million even though its fourth-quarter revenue doubled from the previous one. Amazon’s IPO in May 1997 had an initial $12-to-$14 pricing range but settling at $18, which valued the company at $438 million.

Will Bitcoin overtake gold next?

Gold’s market capitalization crossed $1 trillion in 1972 according to inflation-adjusted numbers. That price would be equivalent to $450 per ounce, breaking a downtrend that was initiated in 1939 by World War II.

Before speculating on whether BTC will overtake gold’s market cap and its status as a global store of value, it’s important to consider that valuing a multi-faceted technology asset such as Bitcoin is a rather unfair comparison with traditional investments.

BTC is a digital store of value that simultaneously functions as a peer-to-peer payment network. Moreover, its censorship-resistant characteristics can’t be mimicked by third-party dependent assets.

Lastly, unlike gold, Bitcoin is a protocol and a programmable shared database. If somehow quantum computing becomes capable of breaking SHA-256 cryptography, the network can auto-arrange a solution, even if it is a temporary one.

In August 2010, 92 billion BTC were mined after an overflow error was exploited. The solution involved the entire network agreeing on a rollover, which proved that the ultimate security consensus lies in its user base.

How would gold enthusiasts react if asteroid mining becomes a reality? What if an extremely ‘authentic’ and expensive fake gold supply entered the market, causing mass testing to become a necessity for every trade? These are issues Bitcoin investors will never have to worry about.

Bitcoin’s path to becoming a multi-trillion dollar asset seems to have a much easier route than gold, silver, or tech stocks. For example, the world’s real estate market is estimated to be worth north $280 trillion, according to data from Visual Capitalist.

How much of the real estate and debt (bonds) market could shift to Bitcoin remains an open question.