Uniswap and SushiSwap have emerged as two of the top decentralized exchanges (DEXs) that are leading the current DeFi bull run higher.

Despite a controversial start for SushiSwap, the last few months have seen it catching up to Uniswap in terms of activity on the platform, total value locked, and the price of its SUSHI governance token.

A recent report from Delphi Digital took a closer look at the two projects and broke down the fundamental differences in the way that each has diverged in their development since SushiSwap’s vampire attack on Uniswap.

SushiSwap originally emerged as a fork of Uniswap v2 with the inclusion of the SUSHI governance token which was distributed to participants of the community.

At the time, Uniswap had yet to launch the UNI token which would subsequently be airdropped to users who had interacted with the protocol either by trading or providing liquidity.

While UNI had likely been planned for release at some point, many saw the surprise airdrop as being a bid to stop a potential vampire attack that would drain the liquidity from Uniswap to SushiSwap.

After a bumpy start which saw SushiSwap co-creator Chef Nomi dump all of his SUSHI tokens on the market for $14 million worth of Ether (ETH), only to later return those funds to the treasury, SushiSwap co-founder ‘0xMaki’ took over as the lead on the project and helped it to correct course and become a viable contender among DeFi platforms.

When it comes to comparing the original token distribution, 65% of the original UNI supply was distributed to the community through liquidity mining and a governance-controlled treasury versus 80% of all SUSHI tokens.

In this regard, the SushiSwap platform has emerged as a more community-controlled project that is self-funded with 9% of all SUSHI emitted from the system awarded to the treasury. In contrast, Uniswap has received some VC backing with a total of $12 million being raised from various sources to help fund future development.

SushiSwap is more decentralized than Uniswap

Differences in the path of development began soon after the fork and led to two distinct platforms that offered a different experience. The excitement continues to build for the release of Uniswap v3, although only a handful of insiders know exactly what the new version will entail.

While users and token holders trust the lead developers which have created an incredible interface thus far, many in the cryptocurrency space prefer a project with more transparency and community involvement.

SushiSwap keeps more to the community ethos of cryptocurrency in this way, with a core team of developers that is more transparent about what is coming and where the project is headed in the future.

SushiSwap also has established an effective governance system that allows community members to have a say in important decisions. The governance system for Uniswap is less conducive to community involvement, which could be the result of the rushed release of the UNI token and a desire to create a solid foundation before integrating community governance.

Over the past few months, the Uniswap team has been focused on building out v3. As Delphi Digital pointed out, Uniswap’s first-mover advantage has provided the platform with a bevy of integrations as the platform was sought out by projects across the sector for the liquidity it provided.

SushiSwap on the other hand has been busy establishing connections with other burgeoning DeFi platforms, most notably the yEarn ecosystem which includes yEarn, Cream, Pickle, Cover, and Alpha. This will help increase the use of SushiSwap’s liquidity offerings and help make the platform more resilient to upcoming challenges.

More recently, SushiSwap has begun to incentivize liquidity for longer tail assets as it looks to establish itself as a place to get access to projects with long term viability. In contrast, Uniswap has been a way for new projects to get a head start on liquidity and community exposure.

One of the most significant differences between the two platforms relates to cash flow generation.

In March of 2021, the UNI community will have the ability to divert 0.05% of all fees on the platform to the Uniswap treasury which is governed by the UNI token. The fees will accrue in the treasury and UNI token holders will be able to vote on what to do with those funds in the future.

SushiSwap has had the 0.05% fee in place since it was created in September 2020 and the governance council agreed that the money generated is used to purchase SUSHI directly and award it to stakers, providing a source of direct income.

In terms of fees generated, Uniswap clearly comes out on top for the time being. With a larger number of available trading pairs and huge liquidity pools for top coins, the Uniswap platform sees higher volumes and this translates into more cash flow for liquidity pools and UNI token holders.

But with fees going to a treasury rather than directly to token holders, UNI has been more appealing to investors with a longer-term outlook who prefer the approach of “accumulating capital in the treasury during the early years.”

So SushiSwap offers a more community-oriented and governed system that provides direct income to token holders from fees generated on the platform while Uniswap is working on a long term plan to create a one-stop DEX that meets every traders’ needs.

First mover advantage and dominant liquidity pools have allowed Uniswap to compete with the likes of Coinbase in terms of trading volume and long-time cryptocurrency advocates appreciate this accomplishment.

SushiSwap has risen from the ashes to create a community-driven project that those just getting into crypto can appreciate for its ability to generate immediate income.

SUSHI has also seen a recent spike in trading volume on Uniswap, showing that the fight for the title of top DEX is just getting started in these early rounds of the crypto bull cycle. 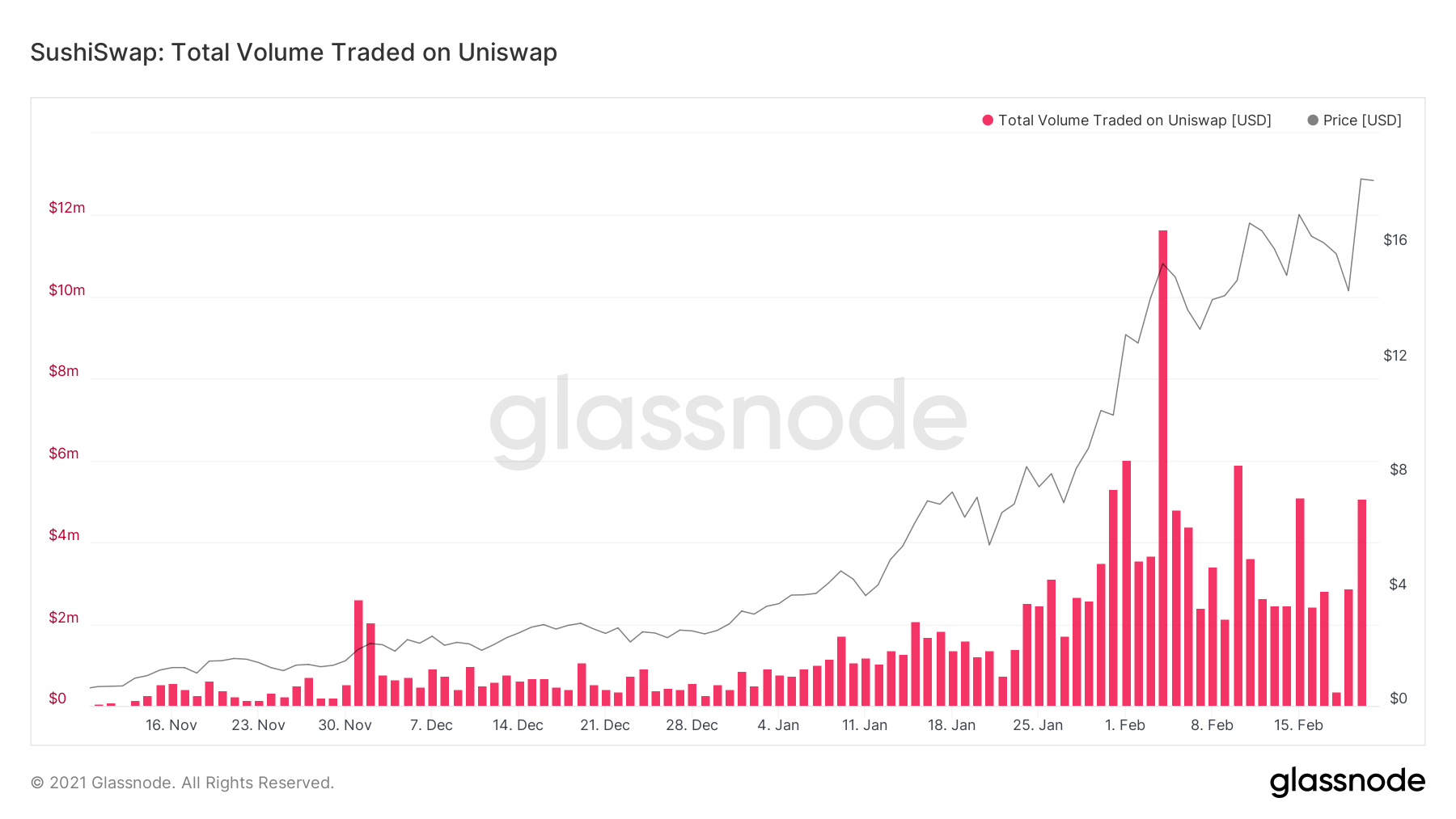 The DeFi sector is just beginning to gain attention from the traditional financial sector and as the liquidity, total value locked and price of each platform’s governance token reaches new highs for both Uniswap and SushiSwap it will be interesting to watch as the two platforms continue to diverge in development.

Crypto and blockchain: What the Brazilian market can expect for 2021
Ethereum failing to target core Web3 issues, says NEAR co-founder
Ethereum price breaks out as 'bad news is good news' for stocks