Bitcoin (BTC) hit a new high over the weekend in the latest episode of its spectacular 2021 bull run — what’s next for hodlers?

As the largest cryptocurrency approaches $60,000, Cointelegraph takes a look at the factors to consider when forecasting this week’s price action.

Equities showed no signs of flipping their endless upside on Monday, as buyers continued to pour in to the market.

Despite warnings that a bubble may already be about to burst, markets built on all-time highs as anticipation of an economic recovery worldwide stoked enthusiasm.

In the United States, it was hope surrounding President Joe Biden’s $1.9 trillion coronavirus stimulus package that was still providing the basis for growth. Last week, Treasury Secretary Janet Yellen suggested that the mechanism for the money, which would include a third round of stimulus checks worth $1,400, would be finalized by Congress within the next few weeks.

“Everybody is playing out the outlook for better economic growth, the outlook for more fiscal stimulus,” Adrian Zuercher, head of global asset allocation at UBS Wealth Management, told Bloomberg.

“It’s normal that nominal yields are trending higher, equities are also trading high, and also commodities based on a better economic outlook.”

While Bitcoin has exploded in line with stocks since the crash of March 2020, not everyone was so optimistic.

In fresh comments on Monday, investor and hedge fund manager Michael J. Burry delivered an onerous forecast for the global economy, claiming that a major correction in equity markets was due.

“People say I didn’t warn last time. I did, but no one listened. So I warn this time. And still, no one listens. But I will have proof I warned,” he tweeted.

Speaking to CNBC, Ark Invest founder, CIO and CEO Cathie Wood added that a “valuation reset” would likely be the result of a continued sharp increase in rates.

With no specific timeframe in mind, the risk was clearly being felt for this March to repeat last March, something which ultimately allowed both Bitcoin and Ether (ETH) to outperform. 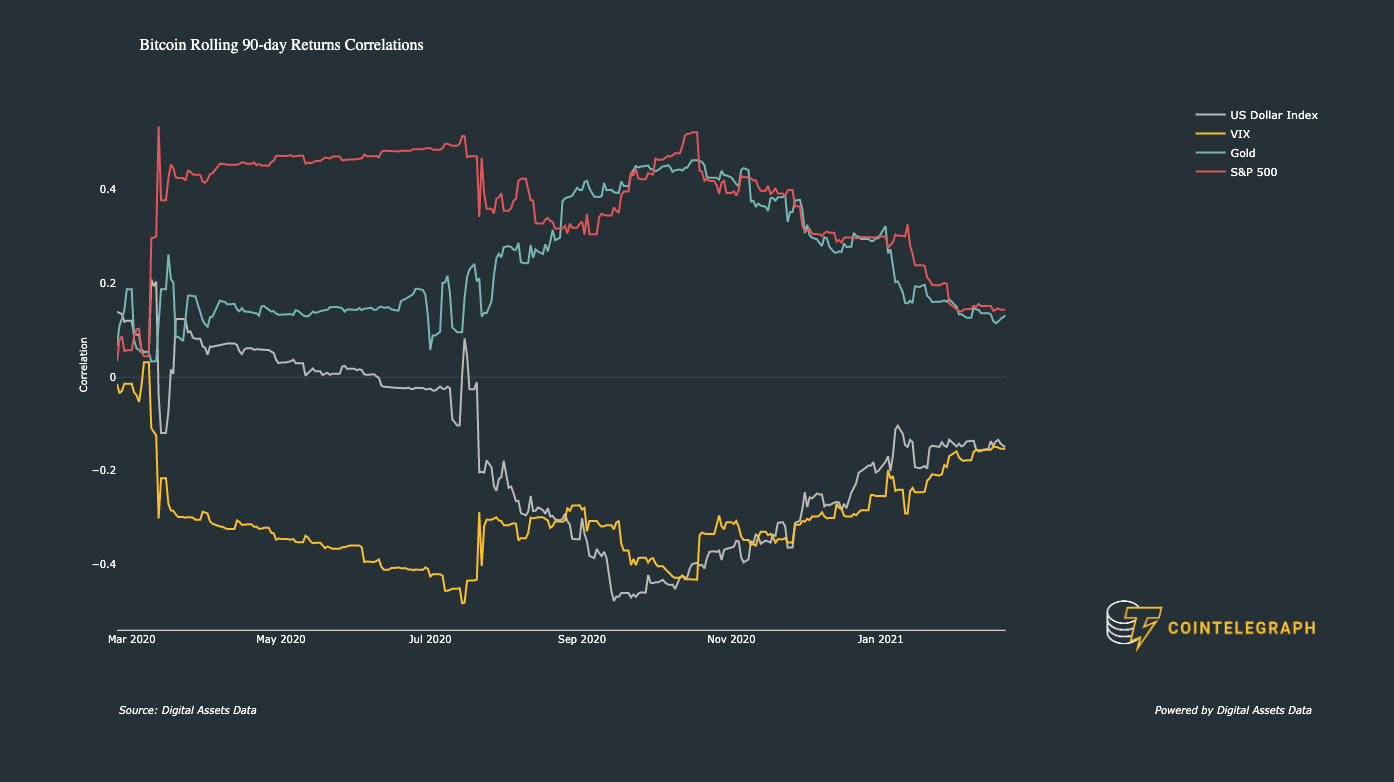 Any short-term continuation for Bitcoin, meanwhile, could be tempered by middling behavior of the U.S. dollar currency index (DXY), which bounced off lows in recent days.

Traditionally, a recovery in DXY spells downward pressure for BTC/USD, and the index spent most of February falling.

As Cointelegraph reported, long-term forecasts still see the dollar weakening overall in time, thanks in no small part to the huge expansion of the money supply by the Federal Reserve.

“There’s a lot more downside for the dollar, and our longer-term perspective is for dollar weakness, not for dollar strength,” Standard Chartered research lead Steve Englander told Reuters at the start of February.

An accompanying poll revealed that only 13% of participants panned for a USD increase in three months’ time, with the vast majority expecting a loss or stagnation in value.

“A lot of the exceptionalism of the dollar has to do with its scarcity,” Englander added. 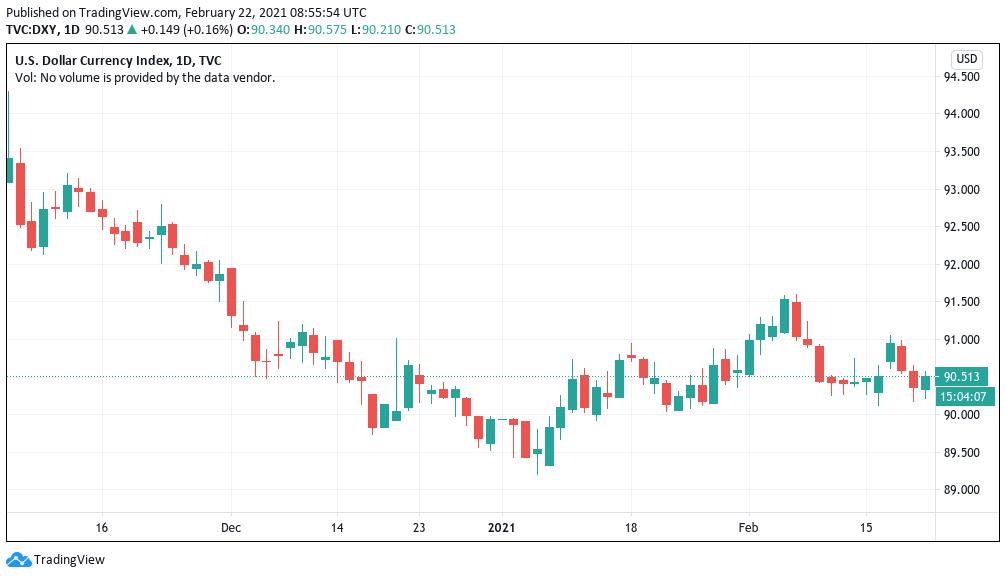 For Bitcoin, signs of a possible pullback came in the form of a spike in exchange inflows on Monday.

As noted by on-chain monitoring resource CryptoQuant, institutional-focused Gemini saw giant aggregated inflows of 28,004 BTC ($1.63 billion), suggesting that a major investor plans to either sell or have funds ready for sale should prices drop.

Last week, Cointelegraph reported that stablecoin balances on exchanges had hit all-time highs, something which accompanied BTC/USD reaching a new record of its own — $58,312 on Bitstamp. This was while the so-called Coinbase premium — the difference in price between Coinbase and Binance — was negative.

For CryptoQuant CEO Ki Young Ju, the nature of the gains was cause for concern despite the resulting euphoria.

“One thing that makes me uncomfortable about this $BTC surge is a negative Coinbase premium,” he tweeted.

“Buying power seems not to come from US institutional investors, but stablecoin whales and retail investors. Not a healthy bull without USD spot inflows.”

ltcoins could soon step up

Should Bitcoin retrace, expectations are that altcoins could once again move into the spotlight this week.

The weekend produced mixed results for major cap tokens, with some gains while others stagnated. On Monday, Bitcoin’s uncertain behavior came as the largest altcoin Ether had already lost 2% in 24 hours after hitting $2,000 for the first time.

Polkadot (DOT), Cardano (ADA) and Chainlink (LINK) were also negative on the day, while XRP put in a surprise move to climb 14% to near $0.60.

“But given how Altcoins are in the very early stages of their macro Bull Market – rest assured… Altcoins will be back.”

Peter Schiff and Bitcoin: “If he buys, I’m out”

It may be time for Bitcoin bulls to get out while they can — because one of the cryptocurrency’s biggest critics might buy a large amount.

In a decidedly cryptic tweet over the weekend, gold bug Peter Schiff queried at what point he should look to sell any BTC he might purchase.

“If I were to actually buy some #Bitcoin, how would I know when to sell? If your answer is to never sell, then what is the point of buying in the first place?” he asked.

“I can’t exchange it, as merchants don’t take it. I need to sell it first, either myself or using an intermediary like Bitpay. But I’m not talking about small amounts. When do I sell to take profits or cut my losses?”

Schiff has dabbled in Bitcoin before, complaining about losing his wallet password, but has made a name for himself by shaming its economic basis and promoting gold as the only option to avoid fiat money inflation.

Interest in hodling therefore, real or not, put the wind up the trading community, who viewed it as a classic sign of a bull market getting out of control.

“Slowly then all at once. If he buys, I’m out,” cryptocurrency trader Scott Melker responded.

As Cointelegraph reported last year, Bitcoin hitting $50,000 might indeed be the event that “triggers” Schiff to invest.