Less than two years after entering the Japanese market, Enjin Coin has received approval from the country’s JVCEA to be listed on the cryptocurrency exchange Coincheck. Thus, the asset has become the first gaming token authorized for usage in the Asian nation.

Digital asset projects that wish to be listed and traded on Japan-based platforms go through a thorough examination process by the Association.

Coincheck, the exchange that fell victim to one of the most notorious hacks with $535 million in NEM stolen, has only 15 currencies listed as of now due to the stringent regulations.

However, it has received a new addition. Enjin, the team behind the popular gaming token – Enjin Coin – announced earlier that it had received approval for its first listing on a Japanese exchange – Coincheck. This comes after more than a year of due diligence and examinations following Enjin’s partnership with the Tokyo-based HashPort in 2019.

Enjin CEO, Maxim Blagov, emphasized Japan’s significant role in the gaming industry and predicted that the Asian market will produce the next big projects in the field:

“From Super Mario to Pokemon and Final Fantasy, Japan is home to pioneering games that hold a lasting place in pop culture. Japan’s culture of innovation is directly aligned with Enjin’s. We believe some of the world’s best blockchain gams will come from the Japanese gaming industry, and we will be able there to help them leverage this powerful technology to the fullest.”

Japan’s video game market is among the fastest expanding niches with an annual growth rate of 7.1% and estimated revenue of over $18 billion in 2021.

Enjin’s native cryptocurrency reacted with an immediate price surge to the announcement. ENJ traded at about $0.23 before skyrocketing by almost 90% to a new three-year high of $0.43.

Thus, ENJ came just inches away from following today’s example from Ethereum and painting a new all-time high above $0.465 (according to CoinGecko).

Despite retracing slightly to $0.37, Enjin Coin has entered the top 100 currencies by market cap as its own reached $350 million. 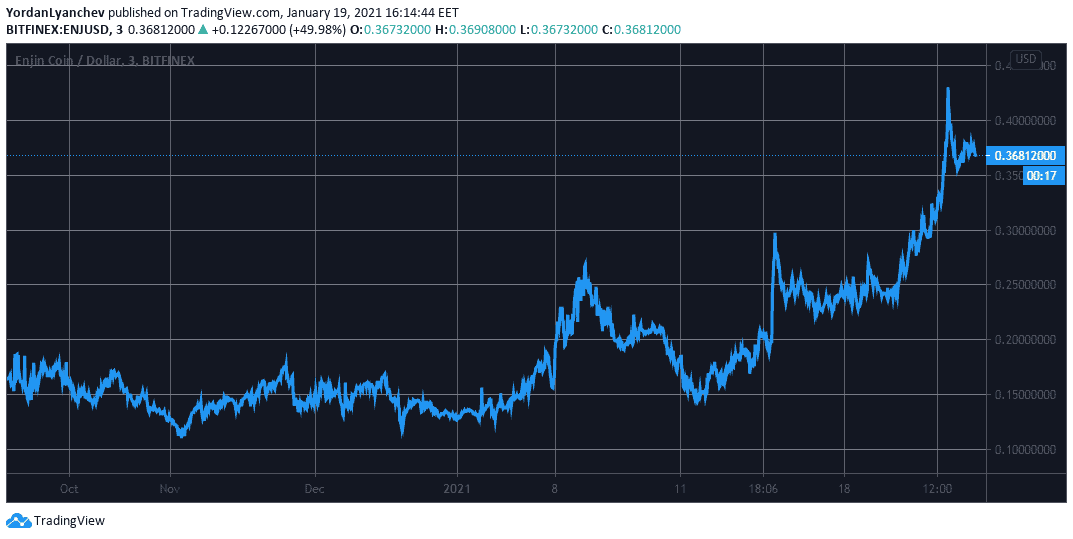