In detail, investors have locked a little over 13 million ETH into the so-called Ethereum 2.0 smart contract since it went live in December 2020. However, there is no date when these investors can redeem their tokens alongside the 10% yield.

Interestingly, around 62% of Ether tokens were deposited before the price peaked at around $4,930 in November 2021. Meanwhile, the other 38% were deposited after the record high, according to Glassnode’s latest report. 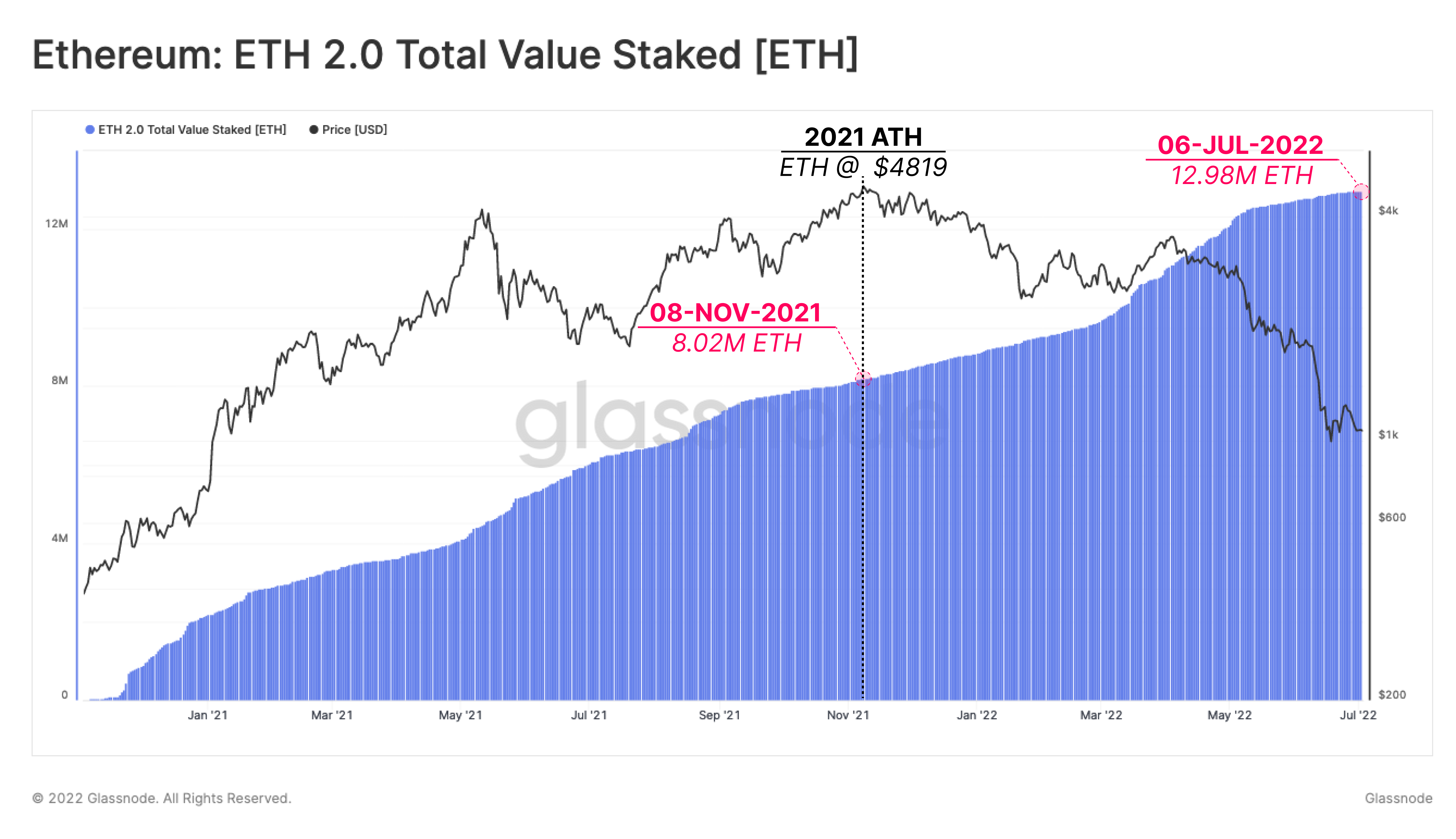 As a result, the total value locked inside the Ethereum 2.0 smart contract peaked at $39.7 billion in November 2021, led by 263,918 network validators. But now, the value has dropped to $14.85 billion as of July 7, despite an additional inflow of 5 million ETH in the last eight months.

Ethereum 2.0 stakers deposited ETH to the network’s PoS contract at an average price of $2,390. So, ETH stakers are now holding an average loss of 55% as a result of ETH’s 75% crash since November 2021, Glassnode noted.

Excerpts from its report:

“If we compare this to the Realized Price for the entire ETH supply, 2.0 stakers are currently shouldering 36.5% larger losses compared to the general Ethereum market.” 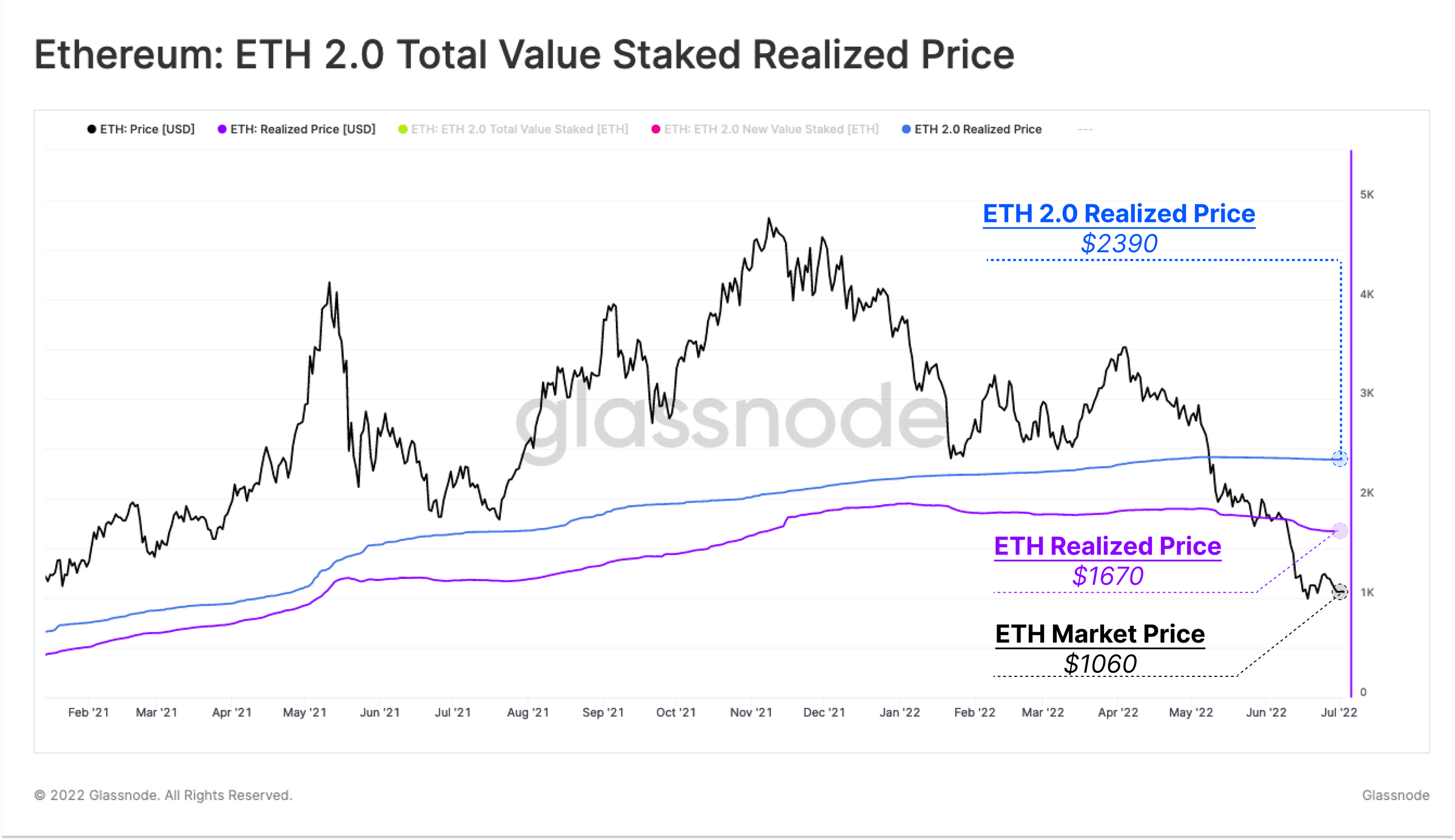 Notably, the weekly average of 32 ETH deposits into the Ethereum 2.0 contract has fallen to 122 a day compared to 500 to 1,000 per day in 2021. This suggest investors’ reluctance to lock their ETH holdings away amid a bear market. 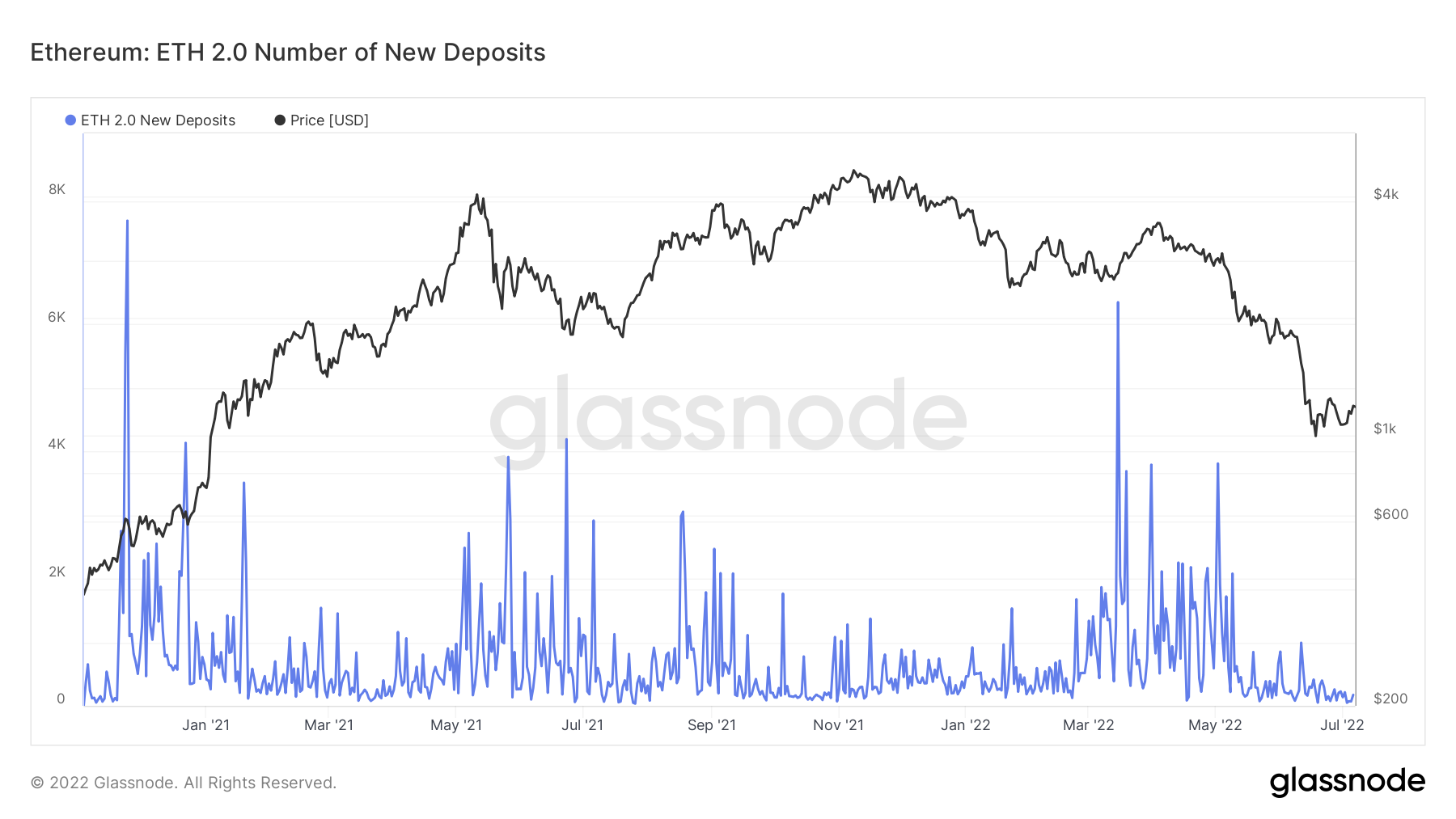 From a technical perspective, investors’ fears seem to be legitimate.

Ether risks undergoing a major breakdown in Q3/2022 since it has been painting a classic continuation pattern called the ascending triangle, as illustrated in the chart below. Therefore, ETH’s price could decline to nearly $800, almost 32% lower than today’s price.

Conversely, Ethereum’s switch to PoS is almost near after a successful trial on July 6, as Cointelegraph covered here. That could have ETH hold above its interim support of around $1,070, as shown in the chart below.

Coupled with an “oversold” relative strength index (RSI) reading (below 30), ETH could rebound toward its 200-week exponential moving average (the blue wave) near $1,600. That would mark a 35%-plus rally from today’s price.

Related: What does a bear-market ‘cleanse’ actually mean?

A similar setup appears in the ETH/BTC instrument, which tracks Ether’s strength against Bitcoin (BTC). Ethereum’s successful switch to PoS could have ETH hold above 0.057 BTC, followed by a move upside toward 0.06 BTC, according to Fibonacci retracement graph levels shown below.