Near Protocol (NEAR) is a smart contract platform that uses parallel processing to scale the network. This technique, known as sharding, resembles what Eth2 is aiming to achieve and Near’s proof-of-stake consensus mechanism also allows token holders to stake their coins.

In the past month, NEAR has rallied by 107% and this raises questions on whether the project is making significant strides in what has become an ultra-competitive smart contract industry.

Compared to its competitors, NEAR is a relatively new project as the mainnet only launched in April 2020. Unlike Ethereum, NEAR’s consensus mechanism works towards fee stabilization and according to its website, the protocol aims to accelerate the development of decentralized applications.

Interestingly, Near’s ICO took place four months after its mainnet launch. A possible reason for this is that the team raised $35 million in private funding rounds held in July 2019 and May 2020. Among its investors are Andreessen Horowitz’s a16z Crypto Investments, Pantera Capital, Electric Capital, and Ripple’s incubator Xpring.

Over the past three months, Near Protocols’ network activity has increased significantly and information on the Near Blog shows there are a couple of exciting applications already live.

On Nov. 24, 2020, 1inch.exchange-backed project Mooniswap revealed their plan to build Automated Market Making (AAM) features on NEAR.The decentralized exchange’s aggregator is designed to roll liquidity and pricing from all significant DEXs into one platform.

Sergej Kunz, CEO and co-founder of 1inch, stated: “By building on NEAR, we’ll be able to experiment with sharding and be prepared for the arrival of Ethereum 2.0.”

On Jan. 19, Crypto.com also intends to launch a new pool offering $250,000 worth of NEAR tokens at 50% below the market price. Clients will need to stake CRO tokens and also meet the set trading volume requirements on the exchange.

One area of concern is there are open questions regarding how the community treasury is governed. A substantial number of NEAR tokens are being managed by a handful of people who are not required to abide by clear guidelines and rules. 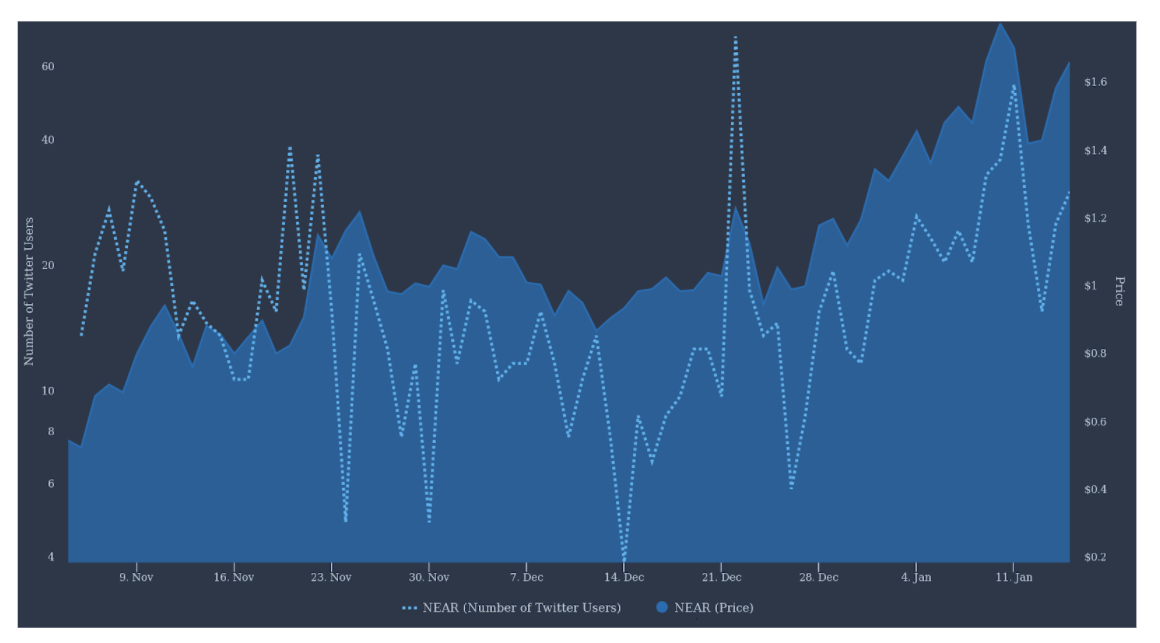 Data from TheTie, an alternative social analytics platform, shows that the recent price spike was accompanied by increased social network activity. Nevertheless, transfers and transactions on the Near Protocol mainnet began only three months ago.

Compared to its competitors NEAR protocol appears to be in an early development stage. Effectively delivering the Mooniswap integration will likely be an important milestone for the project and if successful, NEAR token could possibly see further upside.