Ethereum’s native token Ether (ETH) has dropped by nearly 20% in the last three weeks, hitting monthly lows near $2,900 on April 19. But despite rebounding above $3,000 since, technicals suggest more downside is possible in the near term, according to a classic bearish pattern.

Dubbed “bear flag,” the bearish continuation signal appears as the price consolidates higher inside an ascending parallel channel after a strong downward move (called the flagpole). It resolves after the price breaks out of the channel to drop further.

ETH’s price turned lower after testing its bear flag’s upper trendline on April 4 and now eyes an extended decline towards its lower trendline near $2,700. If the pattern pans out as intended, the price could drop further, with its target at length equal to the flagpole’s height, as shown in the chart below. 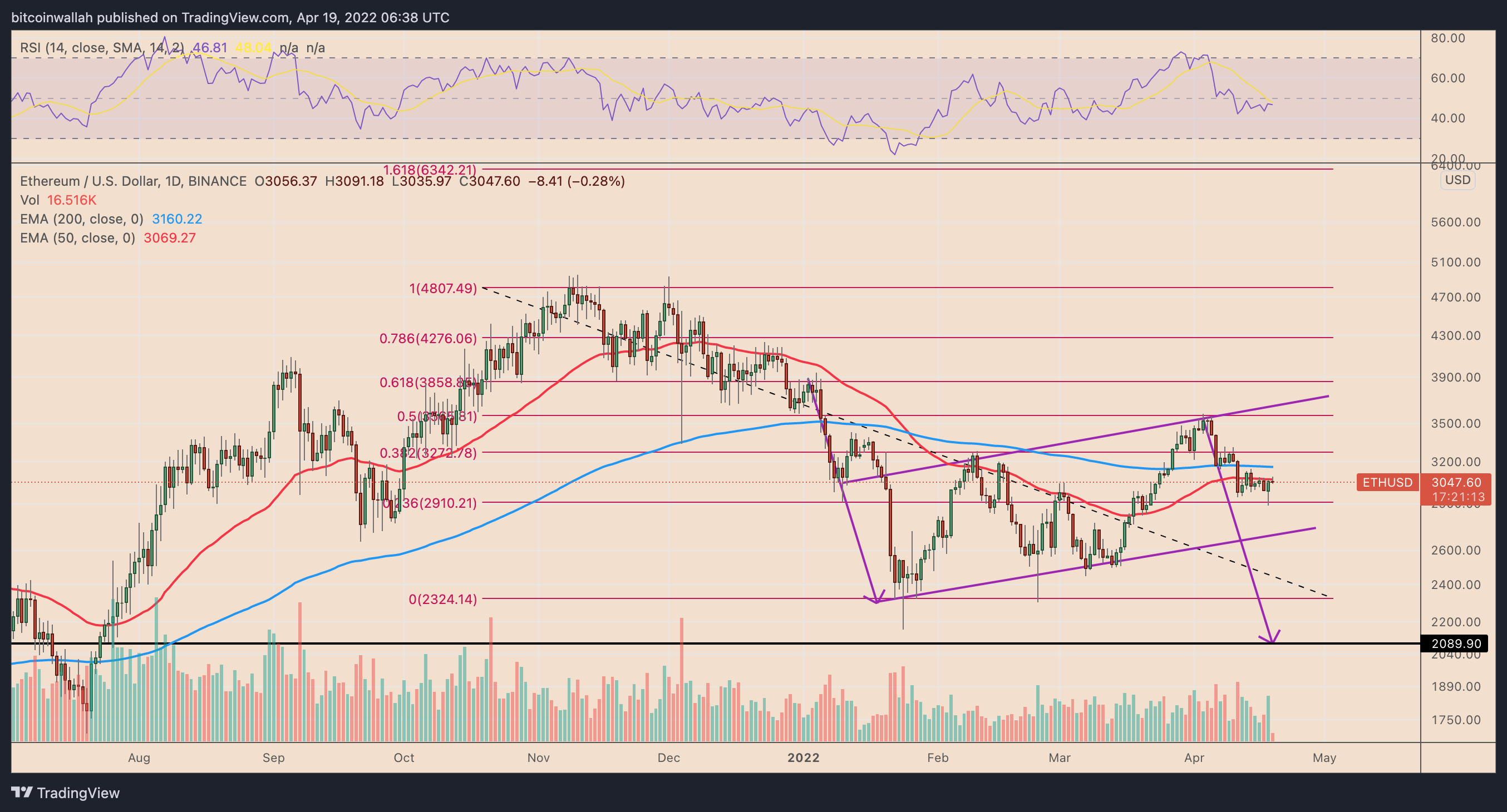 As a result, Ether’s bear flag setup risks a potential retest of $2,000 in the second quarter.

Ethereum’s correlation with Bitcoin and the areas of traditional markets have also increased its downside risks in recent months.

For instance, the correlation coefficient between Ether and Nasdaq 100 was 0.95 this April 19. A coefficient of 1 means that the two assets move in perfect tandem.

Ether price is down by nearly 19% since the start of 2022. Meanwhile, Bitcoin, stock and other riskier markets have also fallen this year as investors assess the Federal Reserve’s willingness to aggressively raise rates and reduce its $9 trillion balance sheet.

More or less, ETH’s fall comes primarily due to sentiments that there would be less cash available to purchase riskier assets.

Related: Here’s how Ether options traders could prepare for the proof-of-stake migration

Nonetheless, speculators remain hopeful about a long-term uptrend due to its much-anticipated protocol upgrade called “the Merge,” likely to be released after June.

“ETH is still experiencing selling pressure from the people that wanted to make a quick buck on the Merge,” noted DoopleCash, an independent market analyst, adding:

“At some moment in time we will find equilibrium, I’m not interested in predicting this bottom, I just want to accumulate as much as I can before we get there.”

Additionally, the months running up to the technical update have coincided with a downtrend of Ether held by exchanges, the number of non-zero ETH addressees climbing, and more ETH flowing into the Merge’s official smart contract.

At -2.8% supply growth a year post Merge, #ethereum will see about 3.3 million ETH a year burned.

By the end of the decade total ETH supply will drop under 100 million.

Or put another way, we will burn the equivalent of ALL ETH currently sitting on exchanges!!!! pic.twitter.com/zqr54TGCzC

Kennan Mell, an analyst at Seeking Alpha, argues that Ethereum’s style of running shadow forks ahead of the Merge launch increases the update’s possibility to become successful upon launch. This should influence more investors, especially those that are waiting on the sidelines, to accumulate Ether in the long run.

Digital banking: How DeFi can lower costs for everyone
Ethereum price moves toward $2,000, but analysts say it’s just another ‘relief rally’
Why a trader says a Bitcoin bottom is close, based on a key technical structure