This rally has been led by strong institutional demand that is showing no signs of stopping. MicroStrategy, meanwhile, said it plans to again raise $600 million through a sale of convertible notes, and the proceeds will be used to buy Bitcoin.

While institutional investors continue to buy, Glassnode data suggests that long-term Bitcoin investors are using this rally to book profits. Bitcoin miners who have also been major sellers during the recent bull run have held back in February, which suggests that they are likely expecting even higher levels in the future.

The current crypto rally has been led by Bitcoin, but altcoins are also seeing their own bull run. Let’s study the fundamentals and technicals of three tokens that have made a strong dash to the upside in the past few days.

The decentralized finance (DeFi) space has been on a tear for the past few months. So, when a project plans to enter the DeFi world, it is bound to evoke traders’ interest. The Icon project is soon expected to take the DeFi plunge with the launch of BalancedDAO.

Another project keenly awaited is the Open Money Market, which plans to bridge the gap between legacy banking services and DeFi, enabling crypto investors to borrow fiat-backed assets against their crypto holdings.

When the anticipation of upcoming projects increases demand but there is no adequate supply, the price tends to rise. About 58.5% of the circulating supply of Icon’s ICX token is staked in the network, and with Binance also adding staking support to ICX, the supply could reduce further.

While attractive yields are important, the safety of funds is also a major factor in DeFi. Therefore, Icon has applied for K-ISMS certification from the Korea Internet and Security Agency for its ICONFi mobile app to ensure security and the privacy of data. This is likely to increase the confidence of investors in the project.

The upcoming release of Icon 2.0 promises to enhance several core features and redesign some of the current features that are expected to further boost interest and adoption of the protocol. The interoperability feature to support and power cross-chain DeFi solutions will be closely watched by the community. 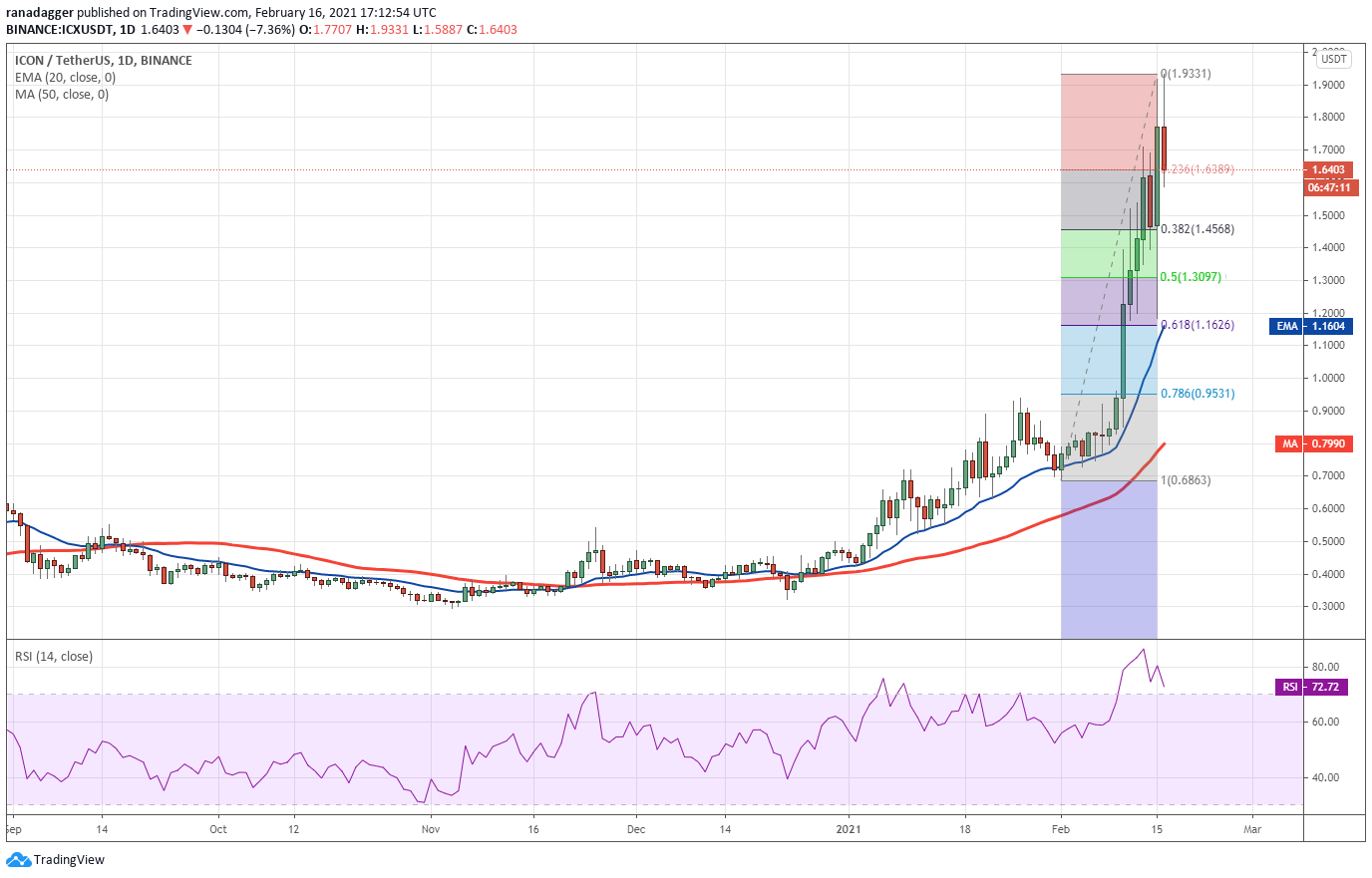 However, the bears are not willing to give up without a fight. The ICX/USD pair is again facing stiff resistance just below the $2 level. The first support on the downside is the 38.2% Fibonacci retracement at $1.4568.

If the price rebounds off this support, it will suggest that traders continue to accumulate on minor dips. The bulls will then try to resume the uptrend by pushing the price above $1.9331. If they succeed, the next leg of the up-move to $2.50 is possible.

On the contrary, if the bears sink the price below $1.4568, the pair could fall to the 20-day EMA. This is an important level to keep an eye on because if the price rebounds off this level, it will suggest the uptrend remains intact. But if the level cracks, it will signal a possible change in the trend.

But it is not only upgrades or partnerships that catch traders’ attention. Certain events can sometimes trigger demand, and that seems to have happened with Ravencoin (RVN).

The GameStop saga showed that centralized entities never offer a level playing field to the retail trader, and the large players wield their power and get their way. This intensified the discussion and the need for decentralization, and Ravencoin was one of the beneficiaries. GameStop’s stock price topped out on Jan. 28, and RVN started its up-move on Jan. 29.

The protocol allows anyone to tokenize their assets, which can be shares of companies, commodities, art, land deeds, energy credits, fun tokens and much more. As the world moves toward digitization and decentralization, protocols such as Ravencoin may become an attractive alternative to traditional finance.

During strong bull phases, rumors also boost prices higher. The rumor doing rounds in the community forums of a possible Coinbase listing may also have provided fodder for the rally.

RVN soared from $0.02266 on Feb. 1 to an intraday high at $0.08863 on Feb. 14, a 291% rally in two weeks. The token formed a long-legged Doji candlestick pattern on Feb. 15 and has made an inside day candlestick pattern today. Both of these patterns suggest indecision among the bulls and the bears about the next directional move. 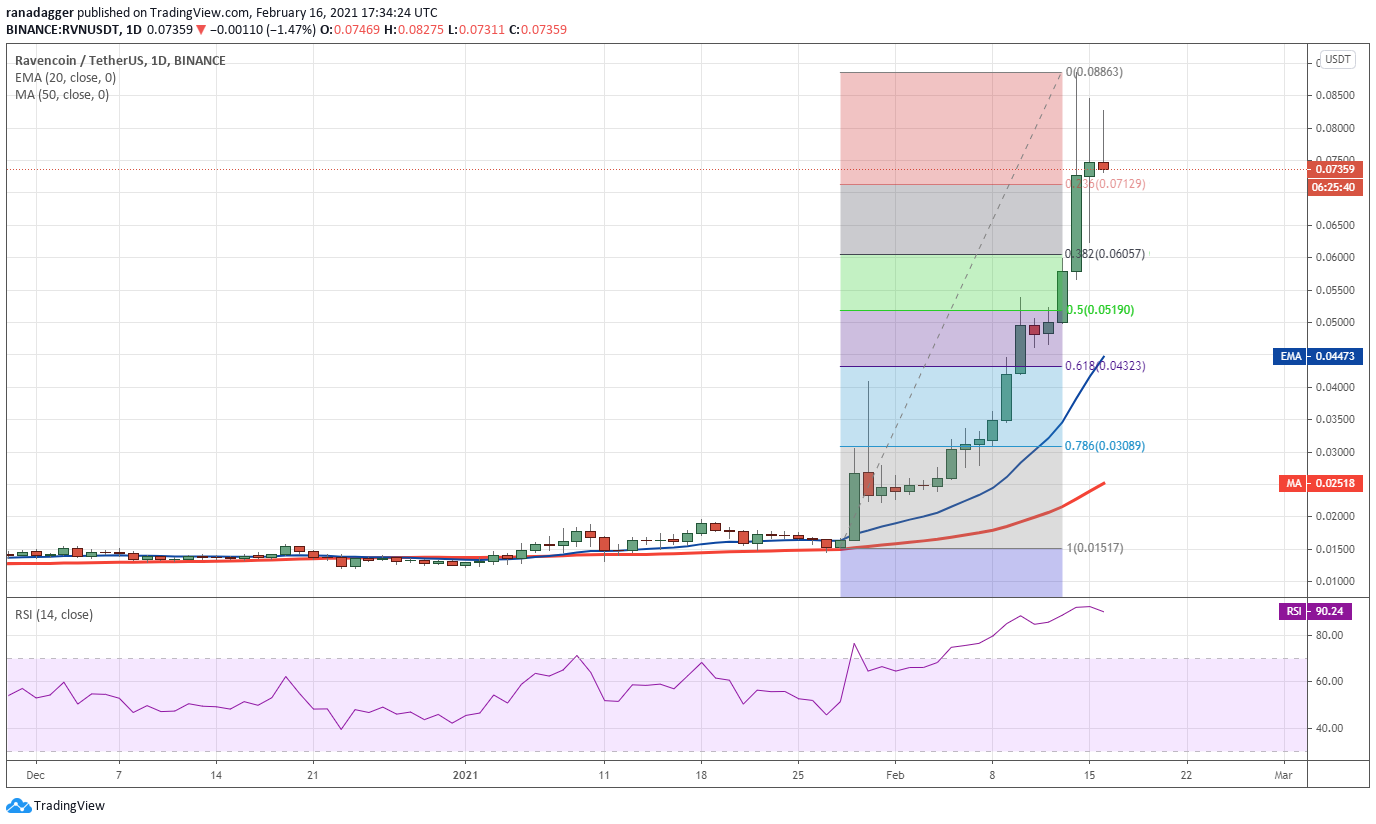 If the price rises from the current levels and breaks above $0.08863, the next leg of the up-move could begin. The bears will then try to stall the uptrend in the $0.10 to $0.104 resistance zone.

However, the relative strength index (RSI) is in the deeply overbought territory, which points to a possible correction or consolidation in the short term.

If the price continues lower, the RVN/USD pair could drop to the 38.2% Fibonacci retracement level at $0.06057, and if this level also cracks, the next support is at the 20-day EMA ($0.044). Such a deep fall could delay the start of the next leg of the up-move.

In a bull market, traders start to discount the future and price in the potential growth. The rally in Lisk’s LSK token also seems to be built on the prospects of some important announcements that may trigger growth.

The team at Lisk promises a major upgrade with the launch of Lisk Core 3.0.0 in 2021, which is expected to bring a plethora of improvements to security, stability, technical aspects, scalability and also reduced fees, among others.

Along with this, details on the interoperability solutions are projected to be ready by spring, after which the implementation could begin. A new developer program is also planned, with lucrative awards that may attract developers to build applications on the platform.

Expectations can flare a rally only to a certain extent. After that, traders will look for results, which will then decide the direction of the token.

LSK surged from $1.2671 on Feb. 1 to an intraday high at $4.70 on Feb. 14, a 270% gain in two weeks. This rally pushed the RSI deep into the overbought territory, which could have triggered profit-booking by traders. 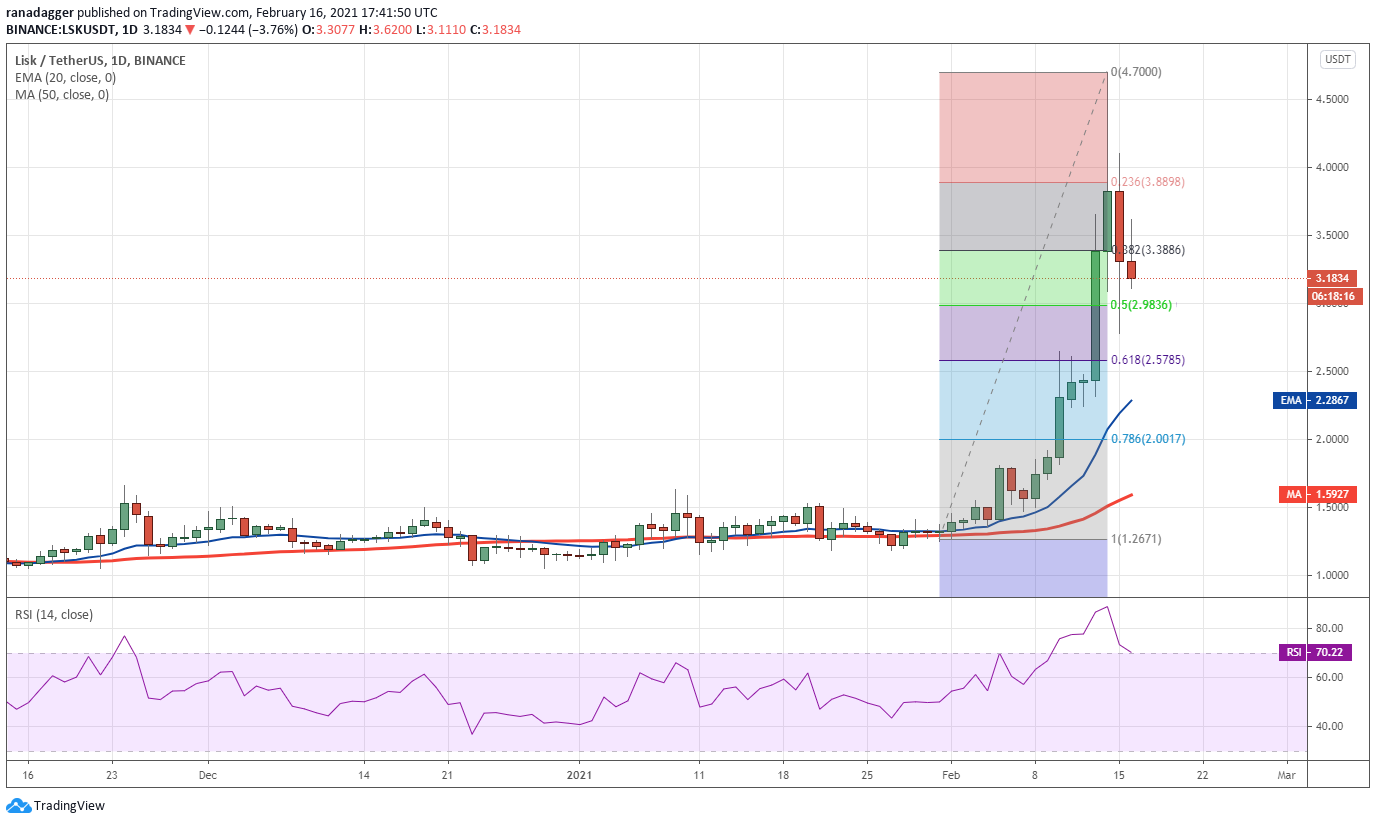 If the pair rebounds off of $2.25785, it may consolidate in a wide range for a few days before starting the next move. The bulls will have to thrust the price above $4.70 to start the next leg of the uptrend, which has a target objective of $6.2099.