The price of Bitcoin (BTC) is showing overall weakness as it struggles to establish $34,000 as a support level. Overall, BTC appears to be stagnating without signs of a short-term relief rally, leading traders to be cautious.

One concerning trend is that the volume of Bitcoin has been stagnating along with its price, apart from the “Elon pump” on Jan. 29. This trend indicates that there is an overall drop in buyer demand since the $42,000 top despite BTC hovering in the low $30,000 region. 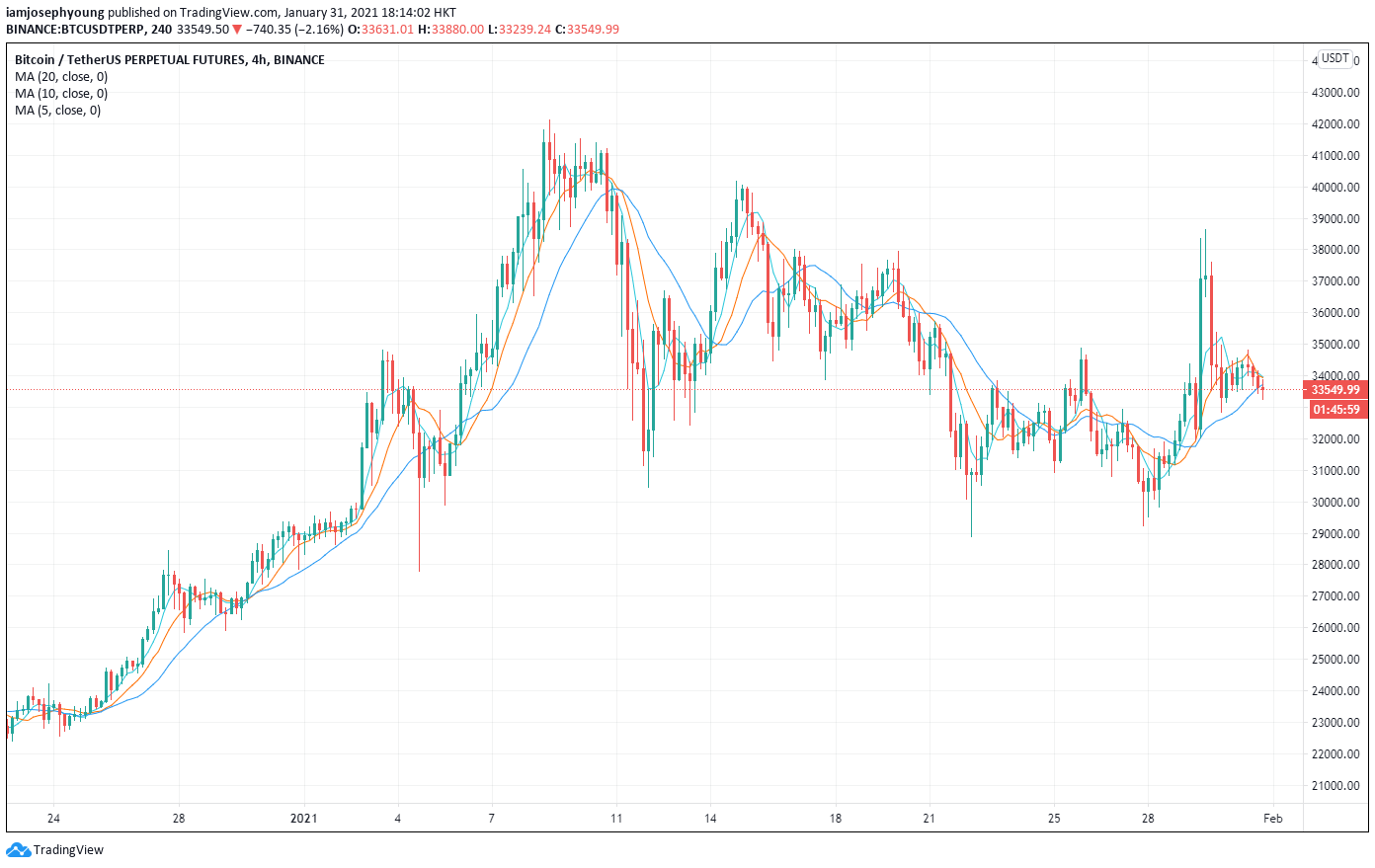 Bitcoin gets choppy after revisiting $38,000

On Jan. 29, the price of Bitcoin rose to as high as $38,461 on Binance after Tesla CEO and the world’s richest man, Elon Musk, ostensibly showed support for Bitcoin.

However, before this rally, on-chain analysts were already warning that the momentum of Bitcoin was slowing.

Ki Young Ju, the CEO of CryptoQuant, for example, pinpointed the high selling pressure from Bitcoin miners as a sign of a short-term bearish scenario.

Although the price of Bitcoin briefly surged 14%, it snapped back down to sub-$34,000 within 24 hours. Hence, weakening on-chain indicators were likely a warning that BTC would retrace most of its “Elon pump” gains.

Ki wrote before the rally:

“Exchange Whale Ratio hit the eight-month high, meaning $BTC might have a large red candle if the price drops. It’s supposed to be below 85% if this bull-run is legit. Otherwise, it’s likely to be a bull trap.”

Whales likely sold as the price of Bitcoin abruptly surged to the $38,000 resistance level, causing a sharp correction.

With shaky on-chain indicators and some selling pressure coming from miners, traders are also showing caution about longing BTC/USD in the near term.

A pseudonymous trader known as “Salsa Tekila” said that he is not using leverage until Bitcoin breaks out or drops back to $30,000. He said:

“We’re at that point where $BTC is far enough from the 30k for me not to be comfortable longing with any form of leverage but at the same time I wouldn’t short. Therefore being spot long until a big down / legacy open / probably Monday morning is best. NO LEVERAGE”

Meanwhile, another popular pseudonymous trader known as “Byzantine General” argues that the rally is broken. Hence, even if Bitcoin is bullish in the macro picture, more downside is possible until it sees a convincing breakout on lower time frames. He noted:

“The bull run is still on IMO, but the rally is broken. If we re-claim the yearly TWAP we can continue ze pump, but until then it looks kinda meh.”

What to watch out for

Traders and technical analysts are closely observing Bitcoin’s reaction to the $34,500 to $35,000 range.

If Bitcoin breaks out of it with strength, momentum, and high volume, then the probability of a short-term trend reversal rises.

However, if Bitcoin struggles to retest the $34,500 resistance level and continues to stagnate in the $33,000 region, the risk of a further breakdown to the $33,000 support remains.

Additional signs that BTC price could see another pullback include the Crypto Fear and Greed index remaining at “extreme greed” levels and Google searches for “Bitcoin” dropping by 50% since multi-year highs seen earlier this month.