Bitcoin (BTC) ownership is becoming more decentralized every day, data shows, allaying fears that the supply is being controlled by an elite.

Data from Glassnode reproduced by statistician Willy Woo on Feb. 3 shows that the number of smaller Bitcoin holders and those holding coins on behalf of clients keeps growing.

Bitcoin in the hands of the little guy

Despite BTC/USD rising to record highs in recent weeks, more, not fewer, small investors are coming in board. At the same time, longtime BTC hodlers, known as “humpbacks” in reference to their status as the largest and oldest whale investors in the space, are not cashing out.

“Distribution keeps getting better,” Woo summarized in a series of tweets on the data. 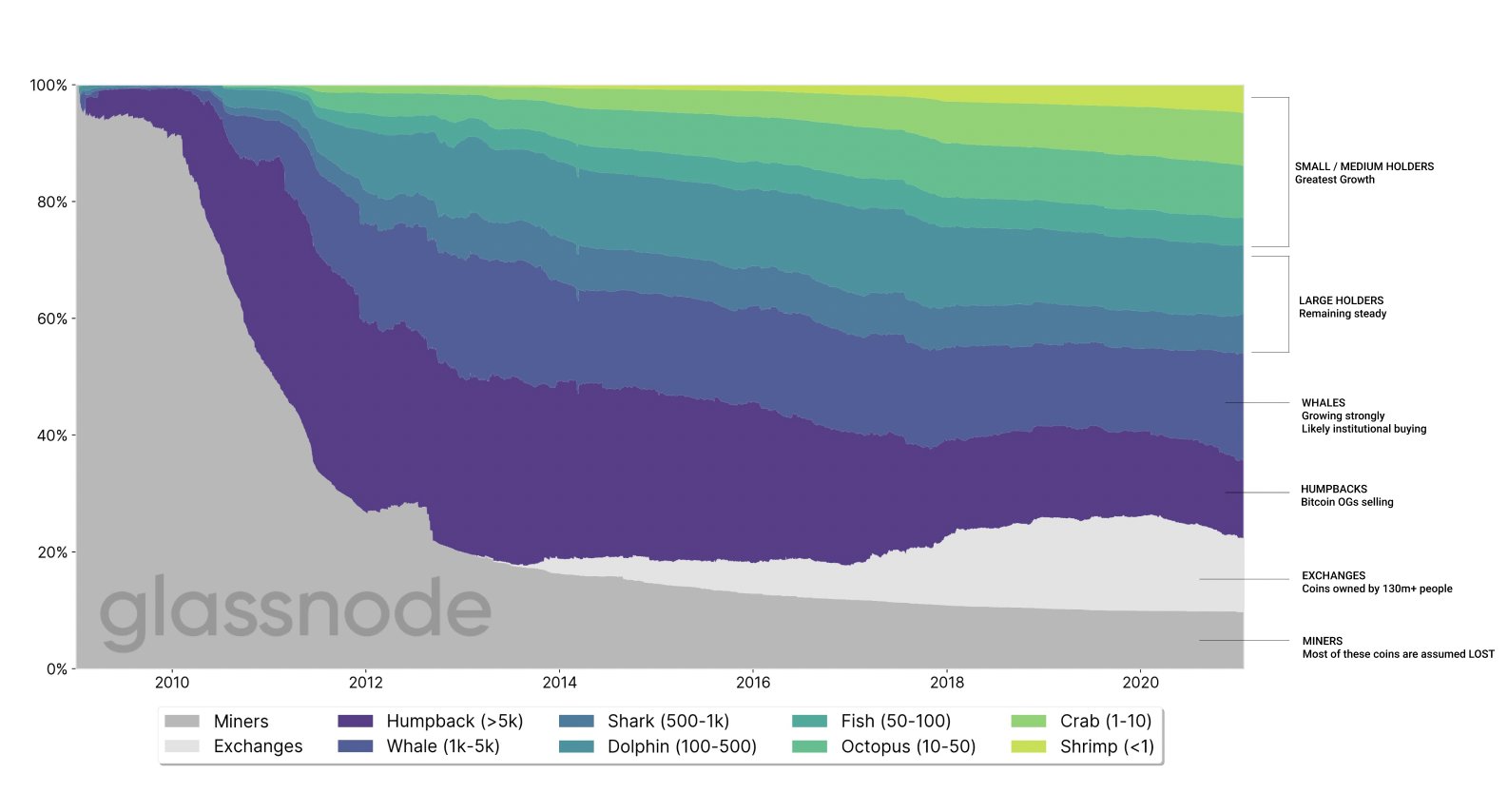 The numbers serve to alleviate fears of centralization fanned by recent articles in the mainstream press on the back of Bitcoin price rises and associated publicity.

In a piece on Jan. 31, Bloomberg used a report from research entity Token Analyst to claim that “Bitcoin’s infrastructure is more centralized than ever before,” and that this was “raising alarms about the security and viability of what is championed as a decentralized network.”

In late December, Forbes targeted mining as an alleged victim of “Chinese centralization.”

Proponents meanwhile continue to highlight Bitcoin as the antidote to the centralization which has undermined fiat currencies around the world.

“How did we get to this point? Centralization, complacency, and a detachment from monetary reality,” commentator Marty Bent wrote in his latest blog post on Feb. 1.

A minor preoccupation nonetheless remains the impact of major selling on distribution should new institutional buyers choose to take profit.

For popular trader Scott Melker, such a scenario is a matter of “if,” not “when,” and the idea that institutions will hodl ad infinitum is a myth.

Both MicroStrategy and Grayscale added to their positions this week, the former purchasing 295 BTC on Tuesday while the latter’s Bitcoin assets under management now total $22.5 billion.

“Regardless of all of the reports surfacing about hedge funds exploring Bitcoin, it is our belief most are going to lock in profit at some point, whether they own GBTC or custody their own coins. So, our answer is yes, institutions will sell their bitcoin,” he wrote this week.

“But it is reasonable to believe many companies and funds will add Bitcoin to their balance sheet in some denomination as an inflation hedge rather than a short-term profit opportunity, leaving some Bitcoin off the market for good.”

Yield Farming Is Simpler Than People Think
Altcoins Time? ETH Soars 15% As Bitcoin Dominance Drops Below 70% (Market Watch)
Does the future of DeFi still belong to the Ethereum blockchain?