Rapper Snoop Dogg and Kiss’ Gene Simmons have been both expressing their support for the “Doge Army” over the weekend alongside Tesla CEO Elon Musk. As a result, the cryptocurrency’s price has rallied once again by 27% on Feb. 7. DOGE is the native cryptocurrency of Dogecoin, which has become a household name in recent months.

So … it’s finally come to this … pic.twitter.com/Gf0Rg2QOaF

Following the Gamestop and Robinhood saga, many traders rushed into the cryptocurrency market. DOGE was the first cryptocurrency that saw retail fear of missing out (FOMO), especially among the r/Wallstreetbets community members.

Why? Because I believe it will go up. But that’s just me,” 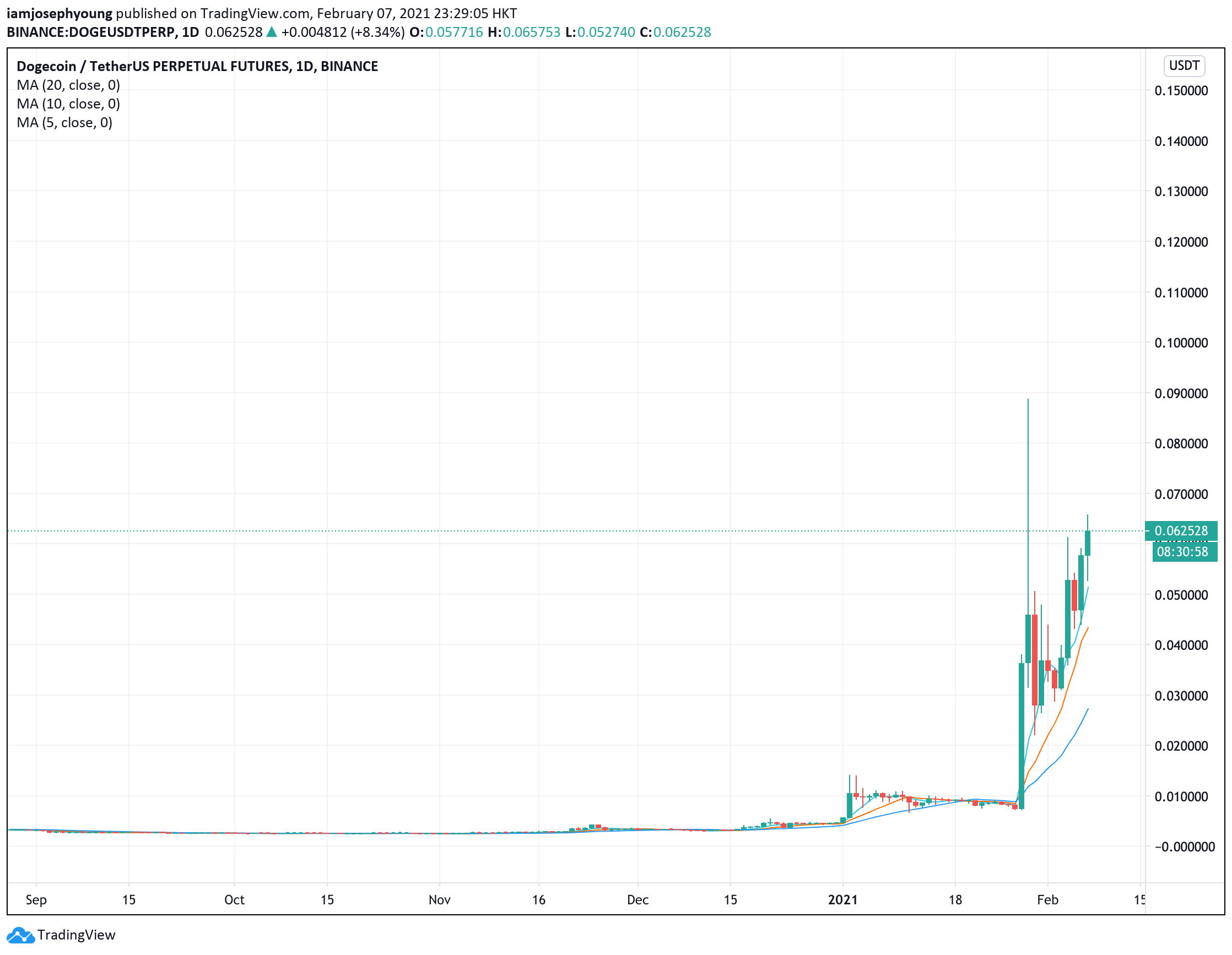 DOGE is typically considered a meme cryptocurrency within the crypto market that started out as a joke. It does not have a use case, but it has an active community around it.

Hence, when DOGE begins to rally due to an unexpected catalyst, like Elon Musk’s DOGE meme or a r/Wallstreetbets-fueled pump, it often sees an explosive uptrend in a short period.

However, traders are urging caution in dealing with Dogecoin. Donalt, a popular and pseudonymous cryptocurrency trader, said the amount of “normie shilling” around DOGE is unprecedented.

The trader emphasized that DOGE for the long term is not a favorable trade, and it will eventually come down, so traders need to approach it with caution. He wrote:

“The current DOGE situation is quite funny. Don’t think we’ve seen this amount of normie shilling in this space before and it’s for our beloved silly DOGE coin of all things. Every other day another celeb comes out talking about DOGE. I see zero reason to counter trade that. That said if you’re trying to get into DOGE for the long term – You’ll give back everything you’ve made. So, sell partials on the way up or try to time the top by analyzing how much steam is left in the normie shill tank. Buying DOGE should only be done with selling in mind.”

When the r/Wallstreetbets rally occurred on Jan. 29, the trading volume of DOGE briefly surpassed Bitcoin on Binance. This means that there is currently a lot of hype at the moment, which also suggests that a pullback should not come as a surprise.

There is a difference between DOGE now and before

During the Jan. 29 DOGE price rally, the futures funding rate was highly negative. On average, the funding rate of a cryptocurrency hovers at around 0.01%.

At the time, the futures funding rate of DOGE was hovering at around -0.1%. This meant that it was 10 times lower than average during that period.

The futures funding rate is a mechanism that incentivizes buyers or sellers based on market balance. If there are more buyers in the market, then sellers have to pay buyers a fee every eight hours.

Currently, the funding rate of DOGE Is significantly above average at around 0.1%. This makes a long squeeze likely, which could cause a short-term drop if cascading liquidations occur.