This week’s correction in the price of Bitcoin (BTC) showed that a market doesn’t go up in a straight line. Meanwhile, another topic has been gaining attention, namely the big rise in the 10-year yields of United States government bonds.

In recent weeks, the 10-year Treasury yield of U.S. government bonds has surged 35% to a new high of 1.44%, the highest point since the cross-asset crash in March 2020.

The 10-year Treasury yield has been accelerating massively in recent weeks, similar to the run-up to the economic downturns in 2000 and 2008. Hence, rising yields are typically considered a signal of weakness for the economy and can have a big impact across many markets.

As the yields increase, governments must pay more for their underlying government bonds. This combined with the current economic conditions of the post-COVID-19 era and record national debt are factors that are unsurprisingly worrying economists.

However, looking at the chart above from a technical perspective, this entire run can still be considered as a simple bearish retest of the previous support level.

Such an example is shown by the previous attempt to test the resistance above. This could be happening here as well, where the rates will then drop back down from the 1.53% level. But it is important to keep an eye on this level because breaking through it can have a major impact on the markets.

The government bond yields also have an impact on mortgage markets. Given that the real estate market is massively overheated at the moment, with people taking on massive debt to purchase homes, an increase in interest rates could pop this entire bubble, similar to what happened in 2008.

However, yields also impact other markets, as gold often reacts to these moves as well. But is this time different? And how will Bitcoin respond to these potential macroeconomic shocks?

The U.S. dollar currency index (DXY) index continues to show weakness as yields are rising, which is generally good news for Bitcoin bulls. This suggests that investors are fleeing the dollar toward higher risk, higher reward investments, such as Bitcoin.

However, from a technical perspective, the DXY saw a bearish retest at 91.50 points, followed by more downside for the dollar, as seen in the chart above. Now, a retest of the 90 points level is underway, with the primary question being whether this level will hold as support. 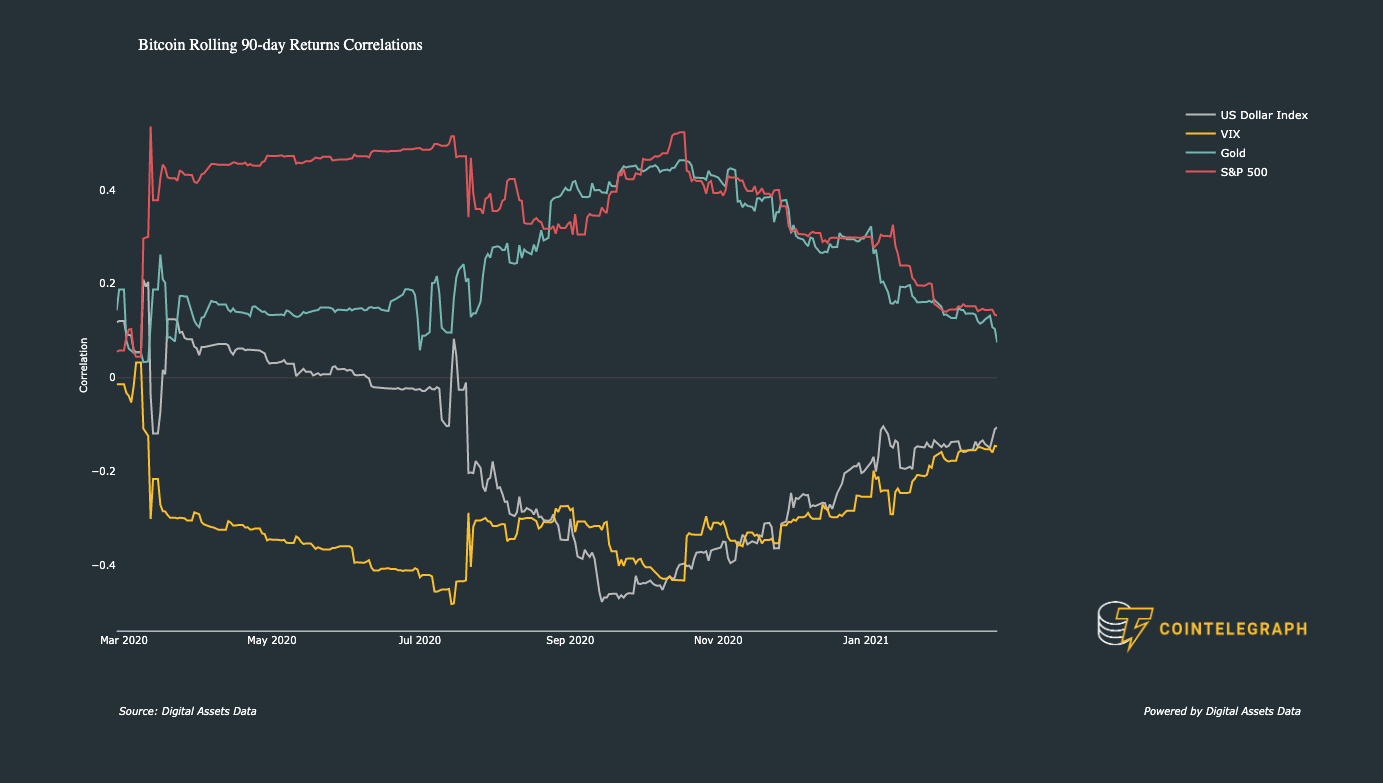 After the crash in March 2020, this inverse relationship grew stronger until September 2020, as a weakening dollar was accompanied by a major increase in BTC price.

Of course, assets are only correlated until they aren’t, and many other factors can have a much bigger impact on BTC in the short term — for example, miners or whales selling Bitcoin, government regulations, etc.

Why is gold showing weakness?

The 3-day chart for gold’s price shows a clear-cut correction since August 2020. More importantly, the increase in yields and the weaker dollar have not impacted the gold market as much as Bitcoin’s market.

Even with the recent surge in yields, people are not buying gold. In fact, an increase in yields has historically not benefitted gold — at least not in the short term — because higher yields would make government bonds more attractive for funds to hold for settlement and as a risk-off asset in their portfolios.

When yields continue rising toward higher levels, however, the uncertainty surrounding the economy also increases, and investors typically begin to shift from the dollar to gold as a safe haven. This was seen in the 1980s when yields ran toward 14% and gold also spiked to new all-time highs.

In the current state, however, falling gold prices may simply be an immediate reaction to the increase in yields in general. However, another possibility is that an increasing number of investors are opting for “digital gold” instead of the precious metal, not only because of the higher upside potential — i.e., risk-reward — but also because these positions can be liquidated much easier.

But another possibility is that an increasing number of investors are preferring “digital gold” to the precious metal — not only because of the higher upside potential but also because these positions can be liquidated much easier on digital trading platforms.

Today, the market capitalization of Bitcoin is still only 7% to 10% of gold’s, which highlights this massive upside potential.

Therefore, the macro conclusion that can be drawn is that the markets are becoming increasingly uncertain about the economy’s and the dollar’s future, as exemplified by the rising 10-year Treasury yields. However, it’s still too early to write off the recent correction in BTC price to this macroeconomic development, as multiple other variables are at play.

Ultimately, the rising yields and a weakening dollar are exciting developments to keep an eye on moving forward. With Bitcoin becoming an increasingly important player in the macroeconomic environment, strategists at JPMorgan Chase, for example, believe BTC may continue to eat away at gold’s market share. This will likely result in an even higher valuation for Bitcoin, particularly in the event of another economic crisis at the expense of gold.