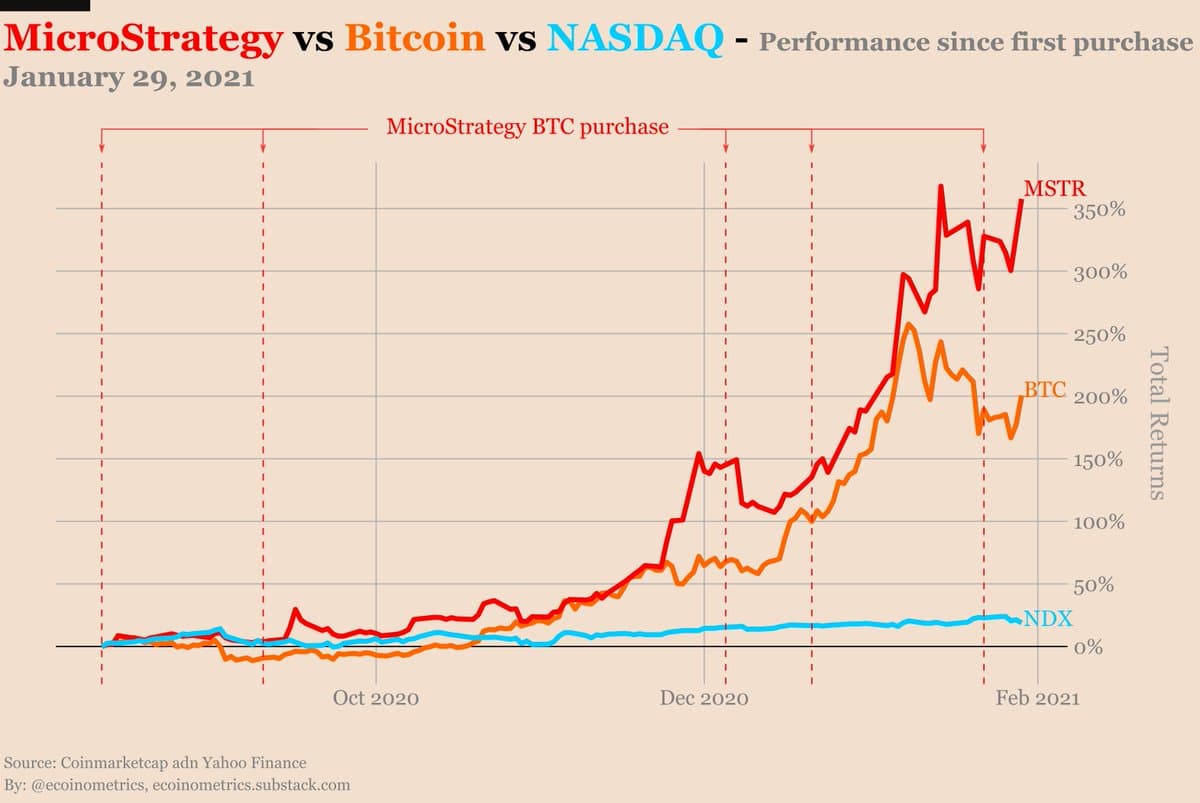 Why has MicroStrategy stock performed so strongly despite the downgrade?

MicroStrategy has been investing its treasury holdings in Bitcoin, making BTC is treasury reserve asset. Currently, it is the biggest public company holder with over 70K BTC worth roughly $2.4 billion at today’s prices.

In an official statement, MicroStrategy explicitly said that it intends to invest in Bitcoin with the proceeds of the bond. This is also the statement that is said to have triggered Citi to downgrade MicroStrategy. The statement read:

“MicroStrategy intends to invest the net proceeds from the sale of the notes in bitcoin in accordance with its Treasury Reserve Policy pending the identification of working capital needs and other general corporate purposes.”

At the time, Citigroup analyst Tyler Radke issued a sell rating. He acknowledged that the return on MicroStrategy’s Bitcoin investment has been “impressive,” but said the market is overpricing the core business of the firm. He wrote:

“MSTR’s bitcoin investment has returned $250M (or worth $26/share or +20% towards stock) since August ’20. While impressive, it pales in comparison to the 172% return in the stock. At the current stock price, our analysis suggests that the market is pricing in much more optimistic valuation scenarios for the core business and Bitcoin.”

Since December 2020, however, the price of Bitcoin saw an explosive rally. While the skepticism toward the core business of MicroStrategy could have some merit, BTC saw a rally of over 100% in the last month of the year.

In just December, Bitcoin rallied from $18,319 to over $42,000 on Binance, outperforming most assets in both the stock market and the crypto market.

But as long as the price of Bitcoin continues to increase in the near term, it will likely have a positive impact on the stock price of MSTR.

Michael Saylor, the CEO of MicroStrategy, remains fully confident in the company’s position on Bitcoin, and often buying the price dips. In the fourth quarter financial results for 2020, Saylor wrote:

“Going forward, we continue to plan to hold our bitcoin and invest additional excess cash flows in bitcoin. Additionally, we will explore various approaches to acquire additional bitcoin as part of our overall corporate strategy.”