The Purpose Bitcoin (BTC) exchange-traded fund debuted on the Toronto Stock Exchange on Feb. 18 and has quickly ramped up trading volumes of about $400 million worth of shares in two days. This is quite impressive, considering that the equity market in Canada is only a fraction of the size of the U.S. markets. This shows strong demand for Bitcoin and investor’s preference to take the ETF route to establish fresh positions.

Last week, Bitcoin reached another important milestone when it hit the critical $1 trillion market capitalization on Feb. 19, making it the sixth asset on the list of top market cap companies in the world.

The involvement of institutional investors and a market cap of over $1 trillion could allay the concerns of manipulation and liquidity raised by the U.S. Securities and Exchange Commission in the previous years as it rejected Bitcoin ETF applications. 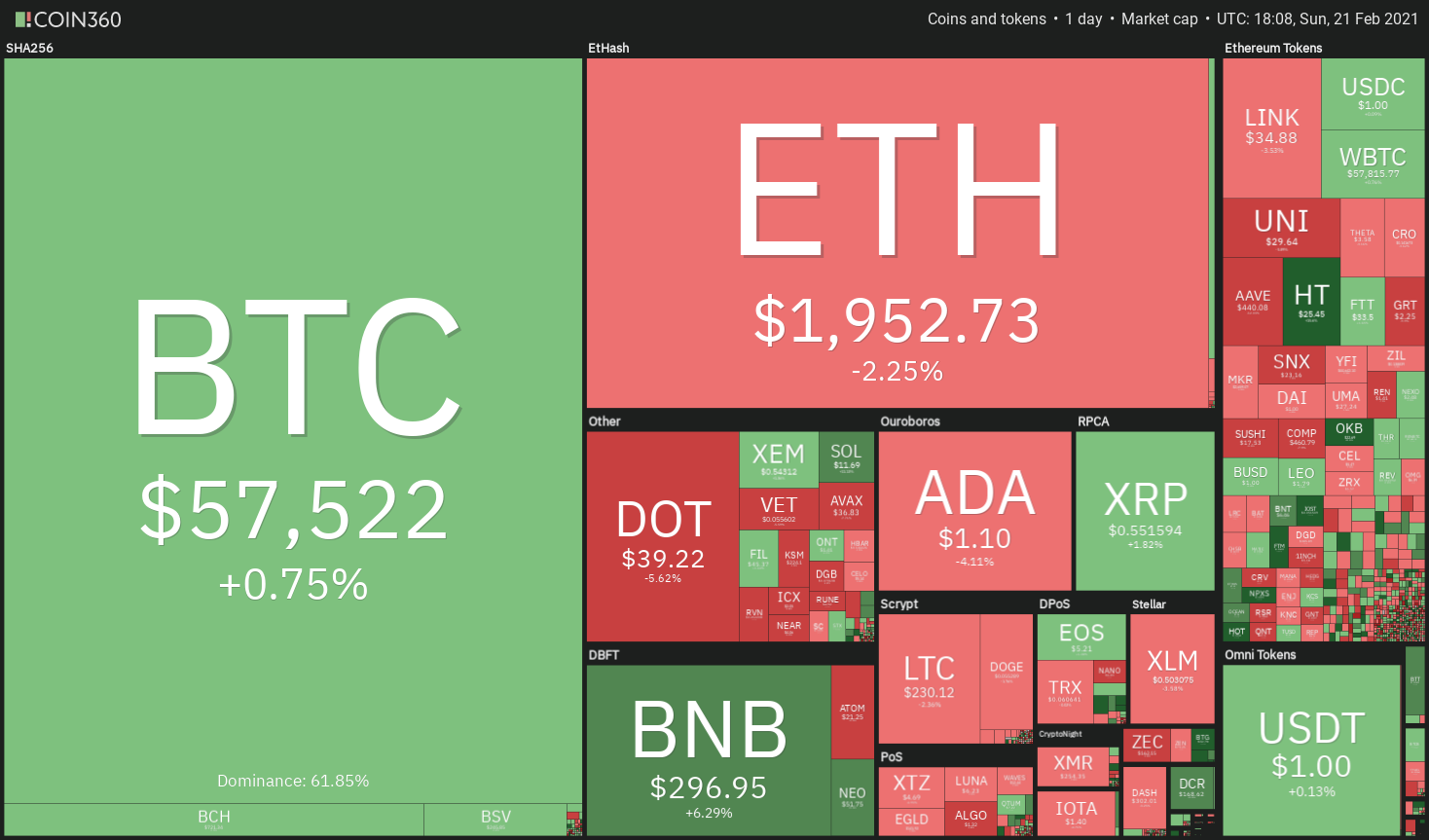 In a recent interview with CNBC, Ark Invest CEO Cathie Wood said that “the probability of an ETF has gone up.” Wood said the new SEC chairman Gary Gensler, who taught a digital currency class at the Massachusetts Institute of Technology, could be more open to crypto, increasing the likelihood of an approved Bitcoin ETF.

Although Bitcoin’s fundamental factors continue to improve, the near term could experience some turbulence due to the steepening of the U.S. Treasury curve.

Let’s analyze the charts of the top-5 cryptocurrencies that indicate the possibility of the resumption of the uptrend in the short term.

Bitcoin broke above the resistance line of the ascending channel on Feb. 19 and the bulls have managed to sustain the breakout. This suggests that traders continue to buy at higher levels. 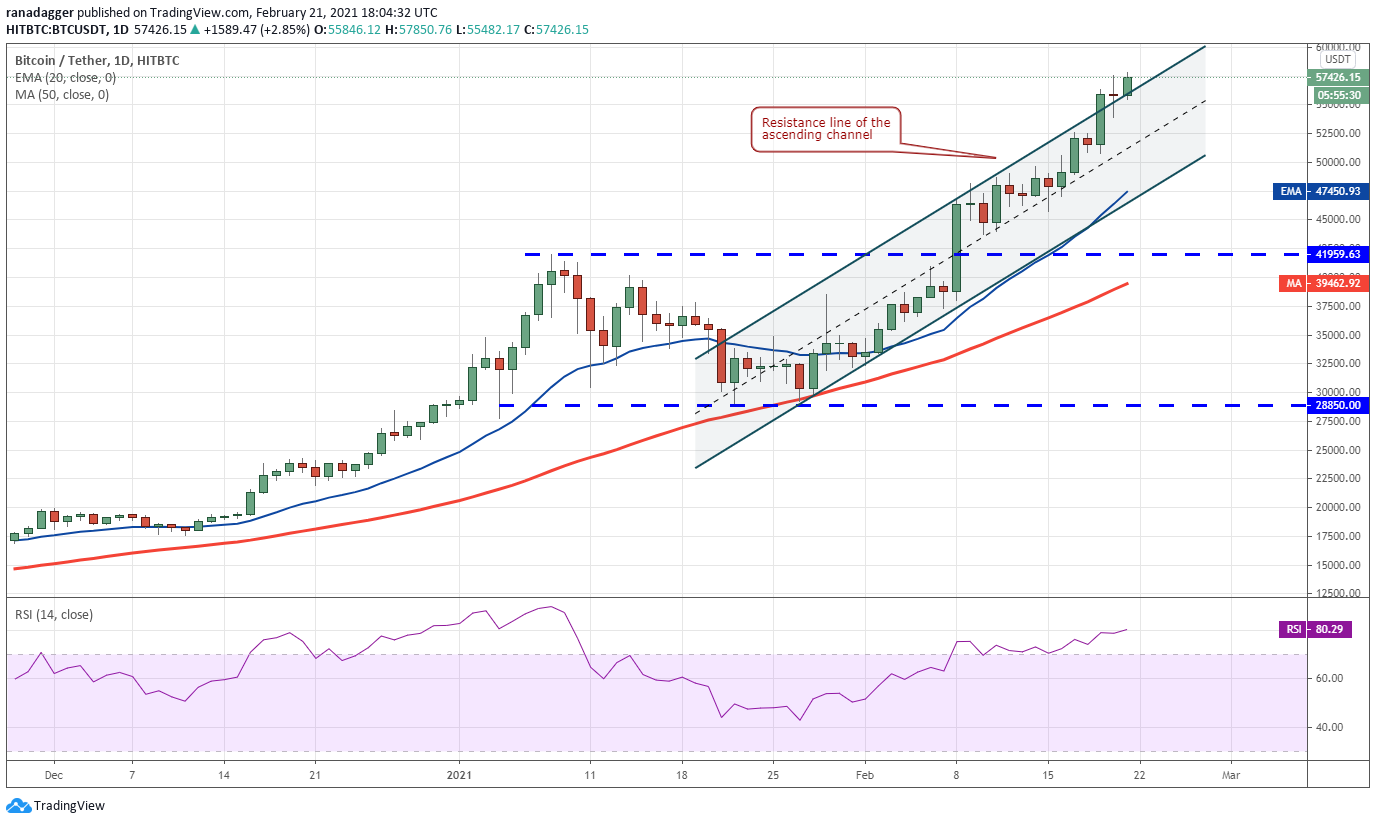 The BTC/USD pair had formed a Doji candlestick pattern on Feb. 20, indicating indecision among the bulls and the bears about the next directional move. That uncertainty has resolved to the upside today and the bulls will now try to propel the price to $60,974.43.

The 20-day exponential moving average ($47,450) is sloping up and the relative strength index (RSI) is in the overbought zone, which indicates that bulls have the upper hand.

Contrary to this assumption, if the price re-enters the channel, the bears will try to pull the price down to the 20-day EMA. A break below the channel will indicate a possible change in trend and the pair may then correct to the 50-day simple moving average. 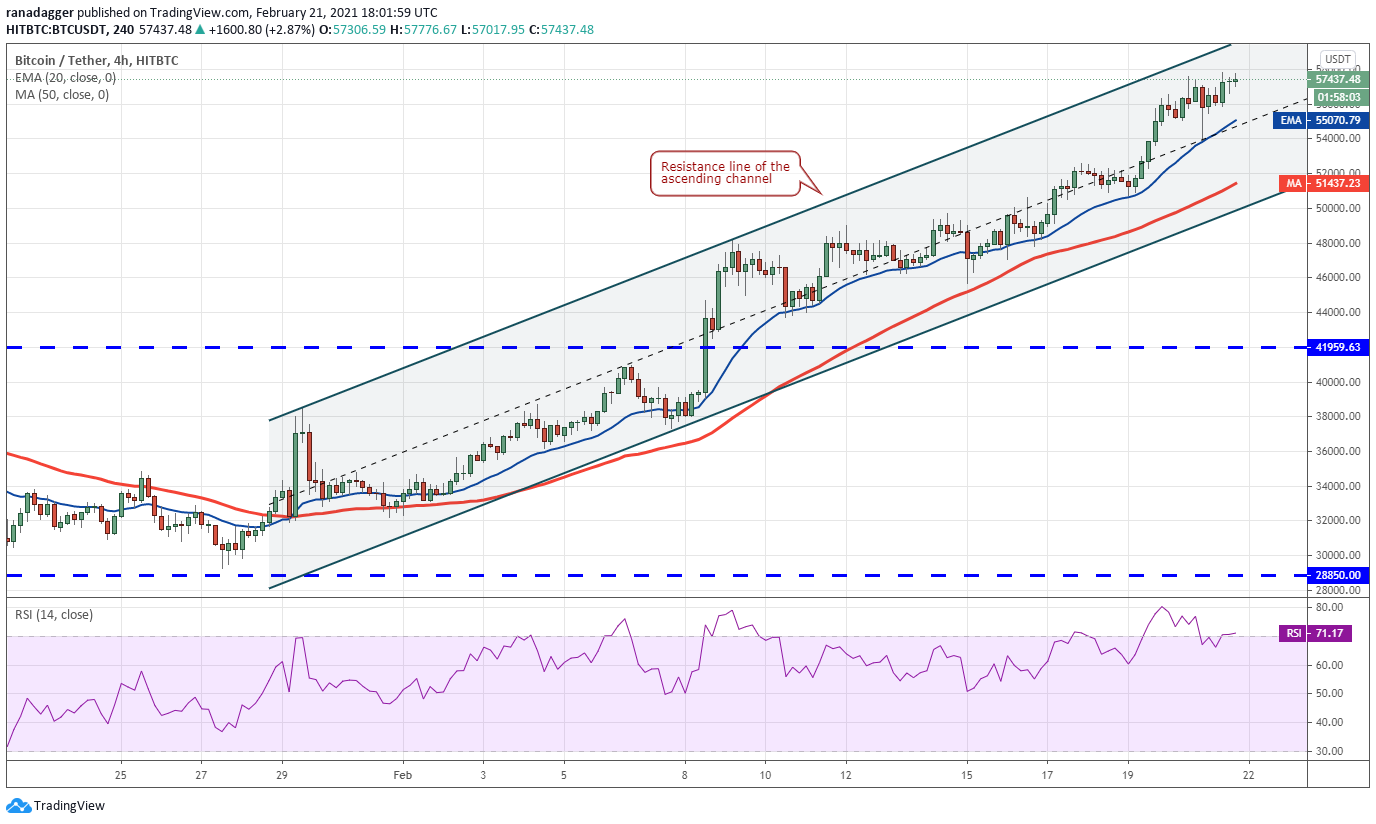 The 4-hour chart shows the pair remains in a strong uptrend and the bulls have aggressively purchased the dips to the 20-EMA. The bears will try to stall the current uptrend at the resistance line of the ascending channel.

If they succeed, the pair may again drop to the 20-EMA. A bounce off this support will suggest that the trend remains strong and the bulls are not waiting for a deeper correction to buy. The momentum could pick up if the bulls can propel and sustain the price above the channel.

On the contrary, if the bears can sink the price below the 20-EMA, it will suggest profit-booking by traders. The trend could weaken if the pair plunges below the channel.

AAVE has been consolidating between $392.50 and $545 for the past few days. A consolidation after a strong uptrend is a positive sign as it suggests that traders are not rushing to the exit because they anticipate higher levels in the future. 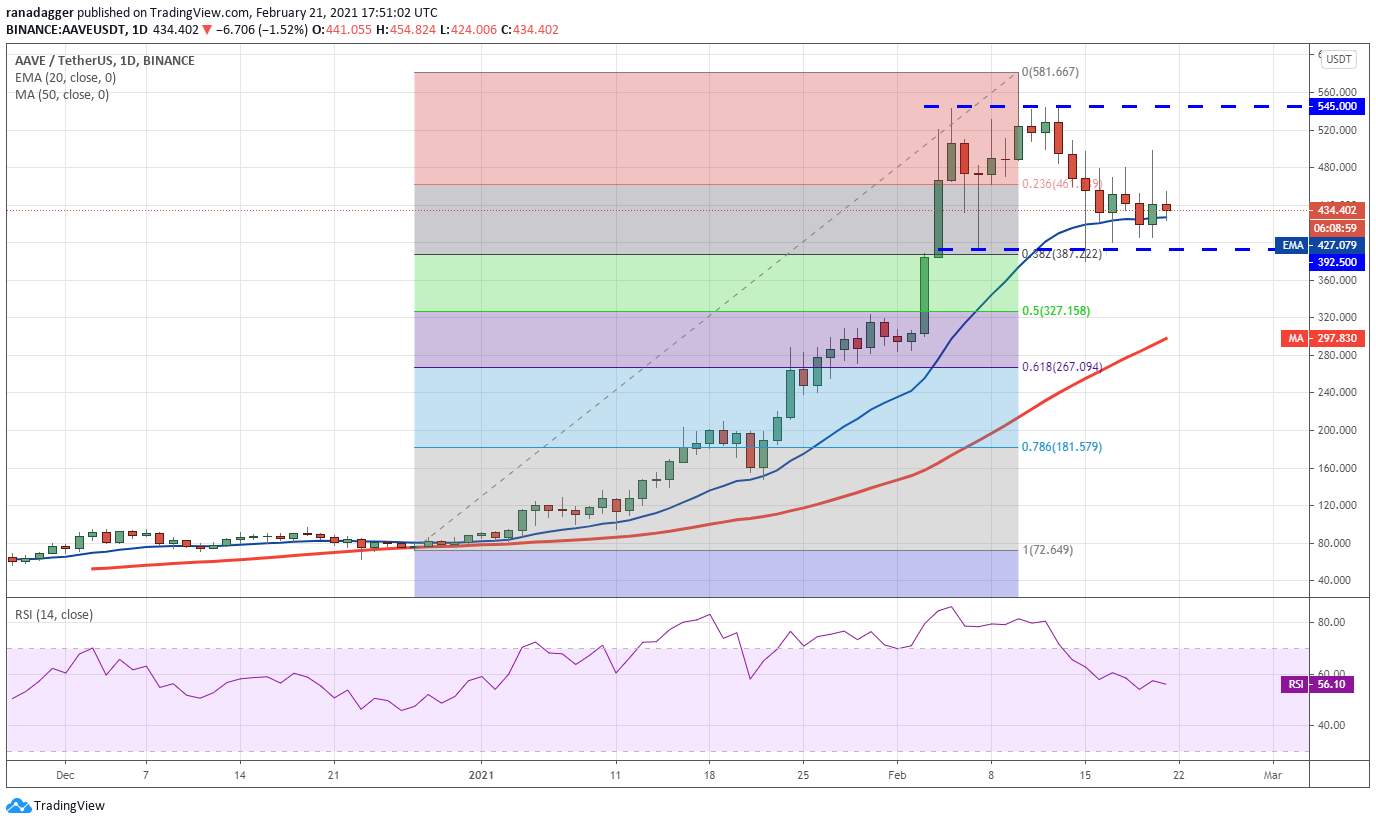 The 20-day EMA ($427) is flat and the RSI is just above 56, which suggests that the range-bound action may continue for a few more days.

On the other hand, if the bears can sink and sustain the price below $392.50, it will suggest that supply exceeds demand. That could start a deeper correction to the 50-day SMA ($297). 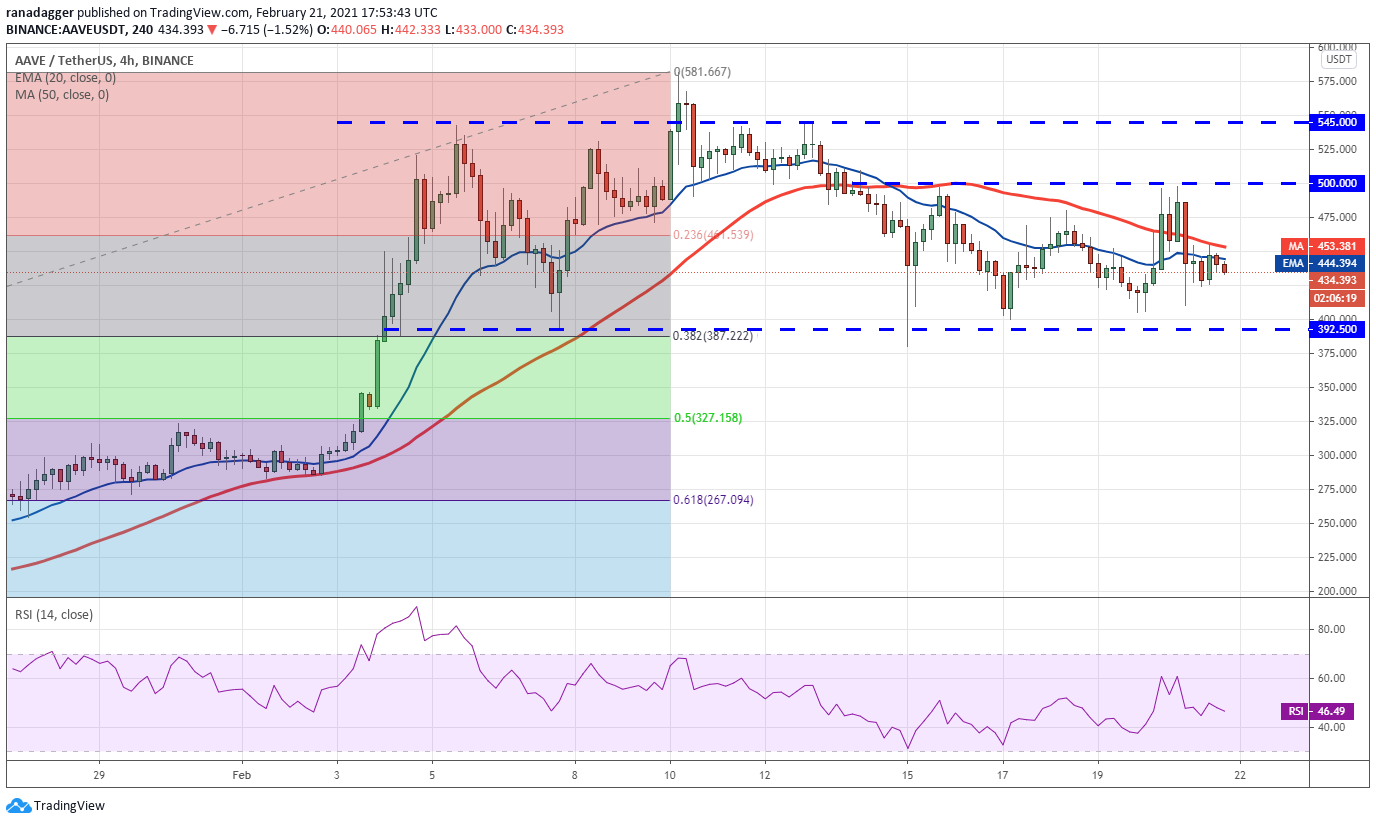 Contrary to this assumption, if the bulls can push the price above the 50-SMA, a move to $500 is possible. A break above this resistance will enhance the prospects of a move to $545 and then $581.667.

Cosmos (ATOM) is currently correcting in a strong uptrend. While the pullback is five days old, the bears have not yet been able to pull the price down to the 38.2% Fibonacci retracement level at $19.007. This shows a lack of sellers at lower levels. 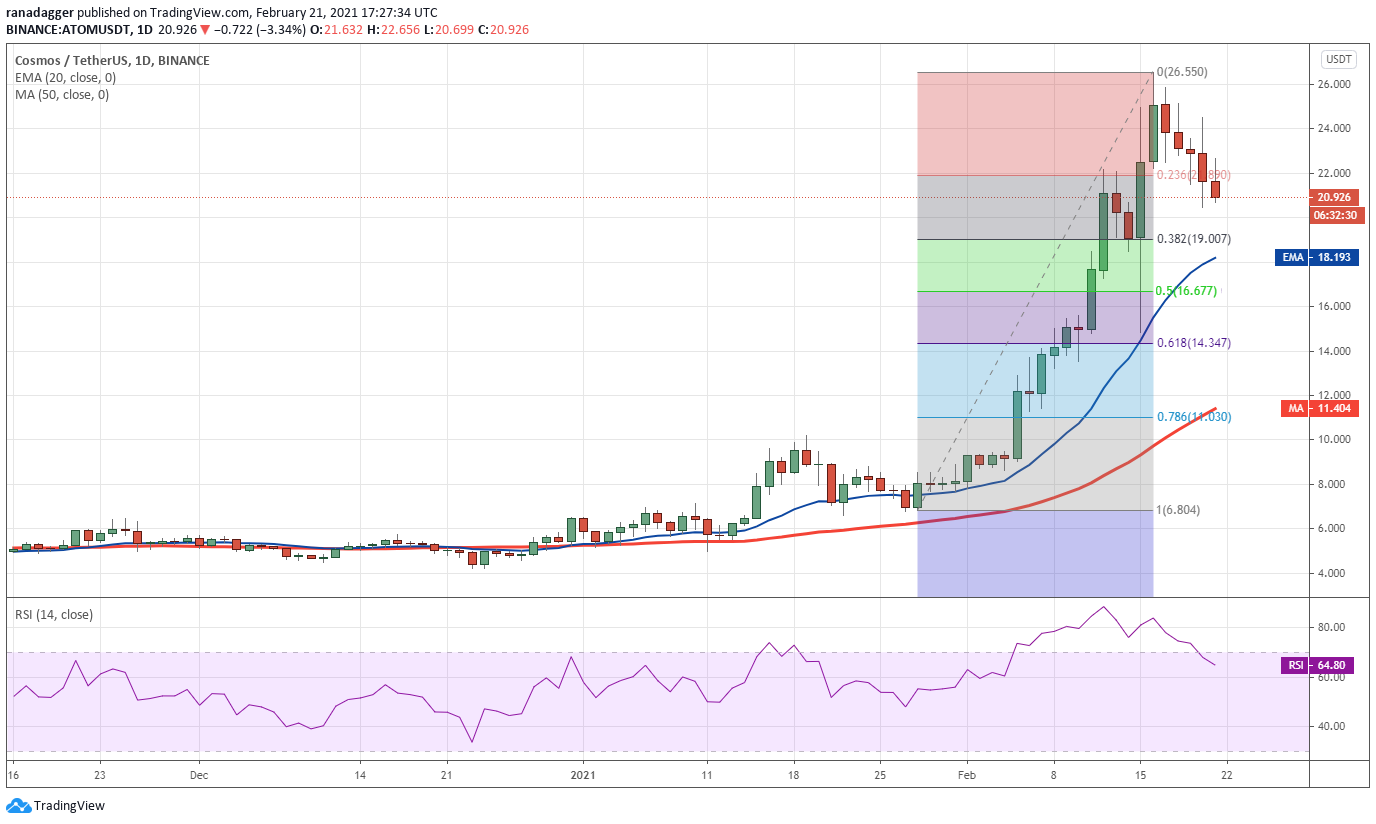 A shallow correction is usually a sign of strength and it increases the possibility of a retest of the $26.55 overhead resistance. The rising moving averages and the RSI in the positive territory suggest that bulls have the upper hand.

If the bulls can thrust the price above $26.55, the next leg of the uptrend could begin. The ATOM/USD pair could then rally to $32.173. If the bulls can conquer this level, the up-move may extend to $40.

On the contrary, if the pair continues to fall, a drop to the 20-day EMA ($18.19) is possible. A strong bounce off this support could keep the uptrend intact but a break below it will suggest a deeper correction to the 61.8% retracement level at $14.347. 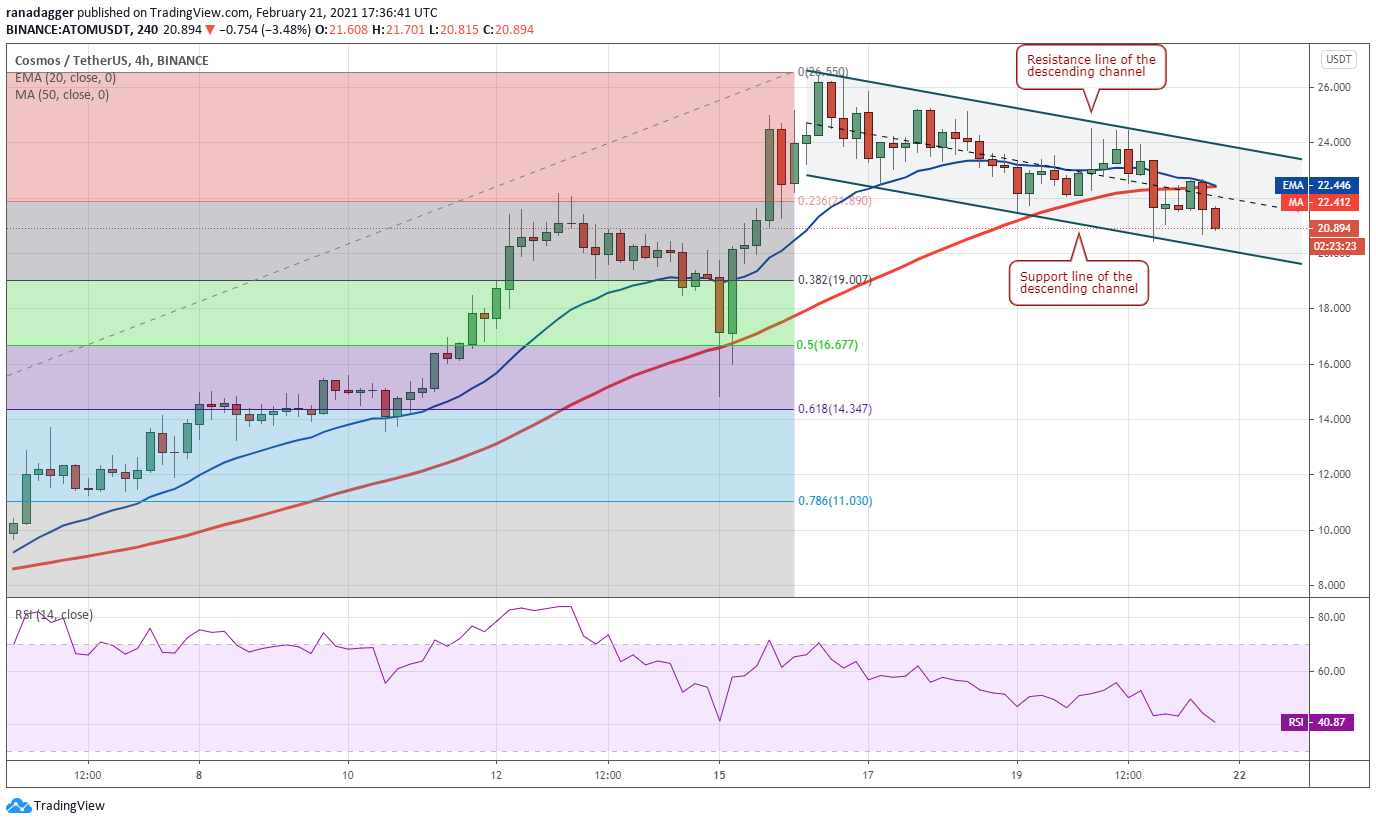 The 4-hour chart is currently correcting inside a descending channel. The moving averages are on the verge of a bearish crossover and the RSI is in the negative territory, indicating a minor advantage to the bears.

However, if the price rises from the support line of the descending channel, it will indicate accumulation at lower levels. On a break above the moving averages, a move to the resistance line of the channel is possible.

A breakout and close above the channel could result in a retest of $26.55. On the other hand, a break below the channel may weaken sentiment. The pair could then decline to the 50% retracement level at $16.677.

NEO broke and closed above the $47.444 resistance on Feb. 19. The bears attempted to fake this breakout and trap the aggressive bulls on Feb. 20 when they pulled the price back below $47.444. 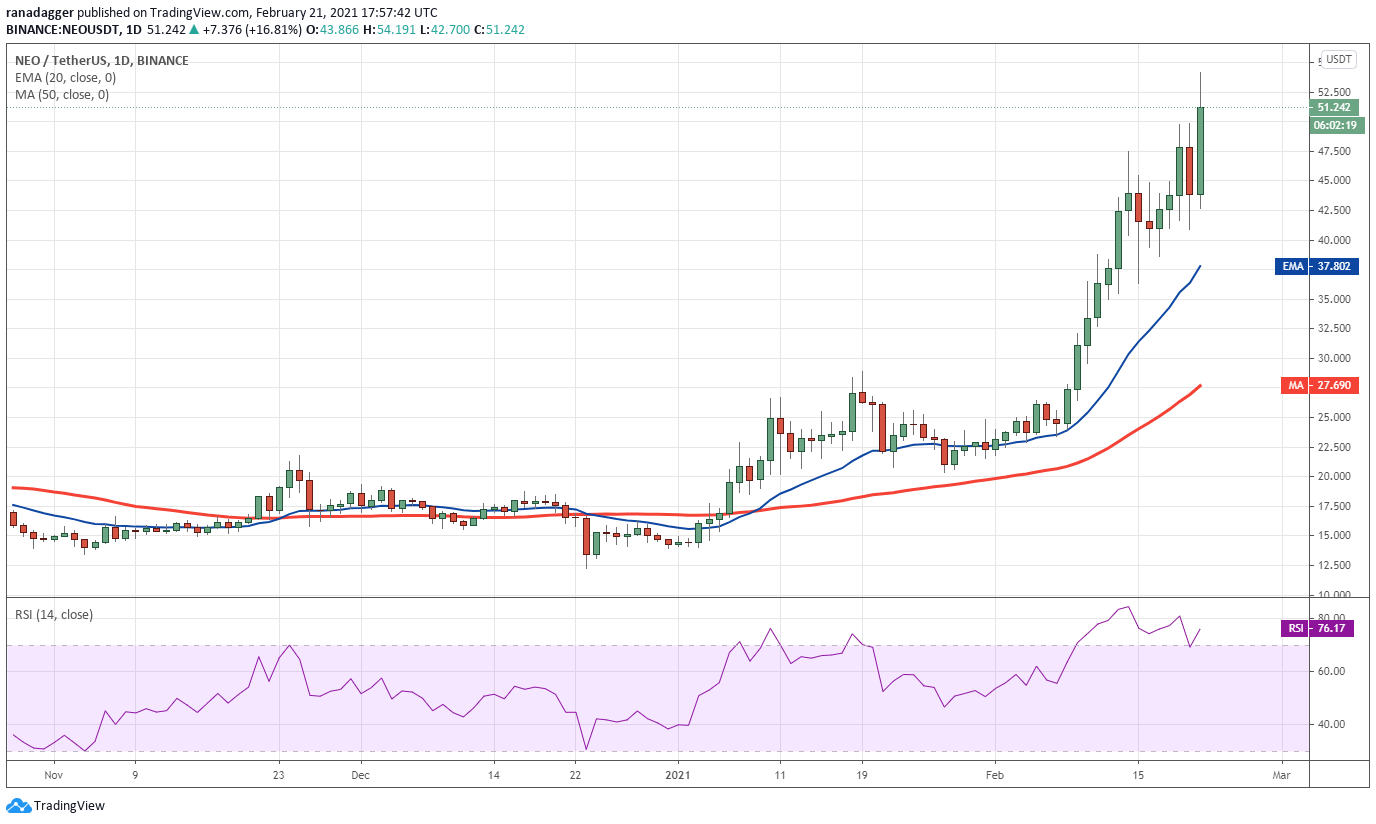 However, the bulls had other plans. They aggressively purchased the dip and have pushed the price above the psychological resistance at $50 today. This may start the next leg of the uptrend that could reach $60.373 and then $64.95.

The upsloping moving averages and the RSI in the overbought territory indicate that bulls are in control.

But if the bulls fail to sustain the price above $50, it will suggest that traders are booking profits at higher levels. A break below the 20-day EMA ($37.80) will signal a possible change in trend. 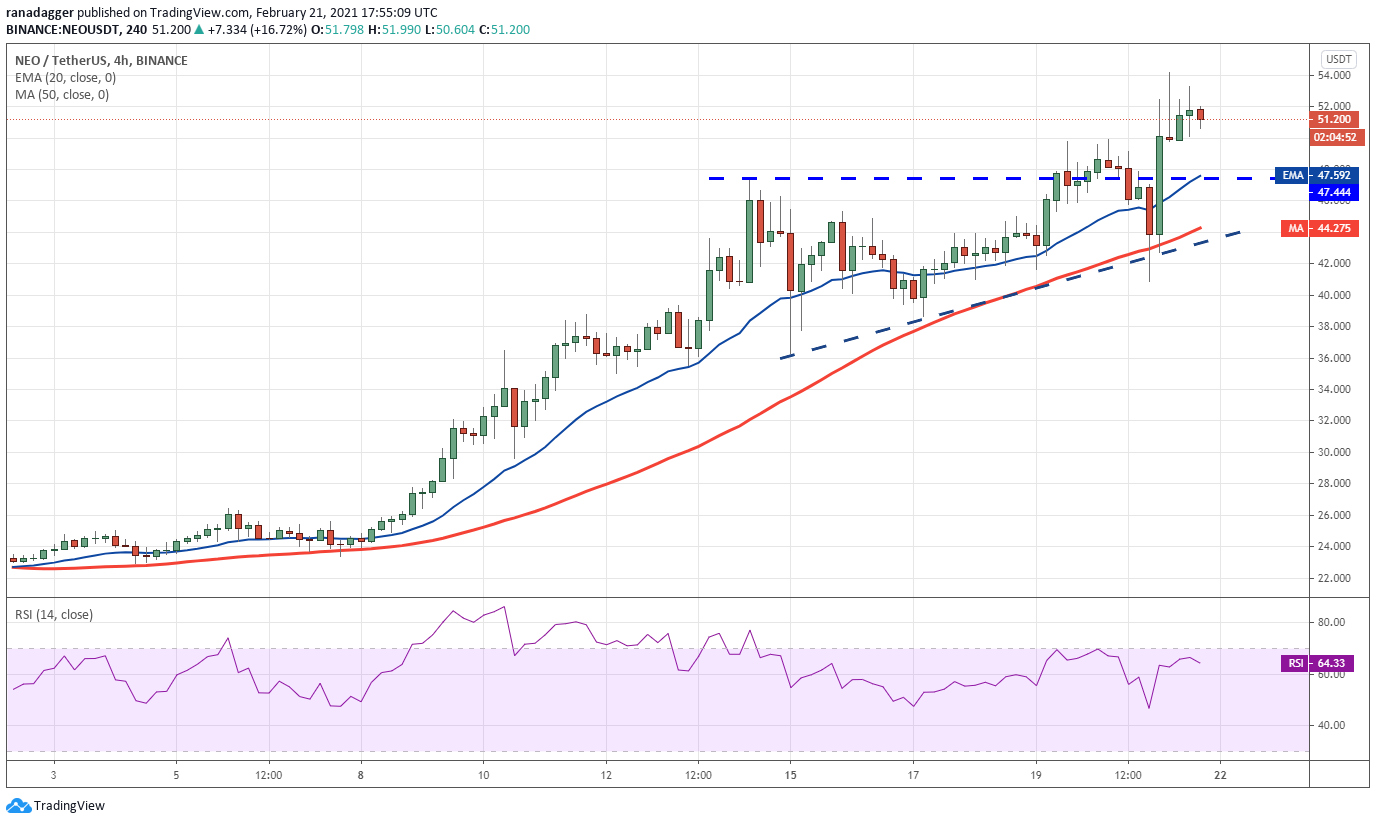 The 4-hour chart shows the formation of an ascending triangle, which has a pattern target at $58.588. Generally, the price turns down and retests the breakout level but sometimes, when the trend is strong, the price only consolidates before resuming the up-move.

The bulls are currently defending the $50 support. If the price rises from the current level and breaks above $54.191, the uptrend could resume.

This positive view will invalidate if the pair turns down from the current level and breaks below the triangle. Such a move may result in a fall to $36.30.

After the sharp rally from $0.026714 to $0.060774, VeChain (VET) has largely held the 38.2% support at $0.047763 on a closing basis, which shows accumulation at lower levels. The rising moving averages and the RSI in the overbought zone suggest the path of least resistance is to the upside. 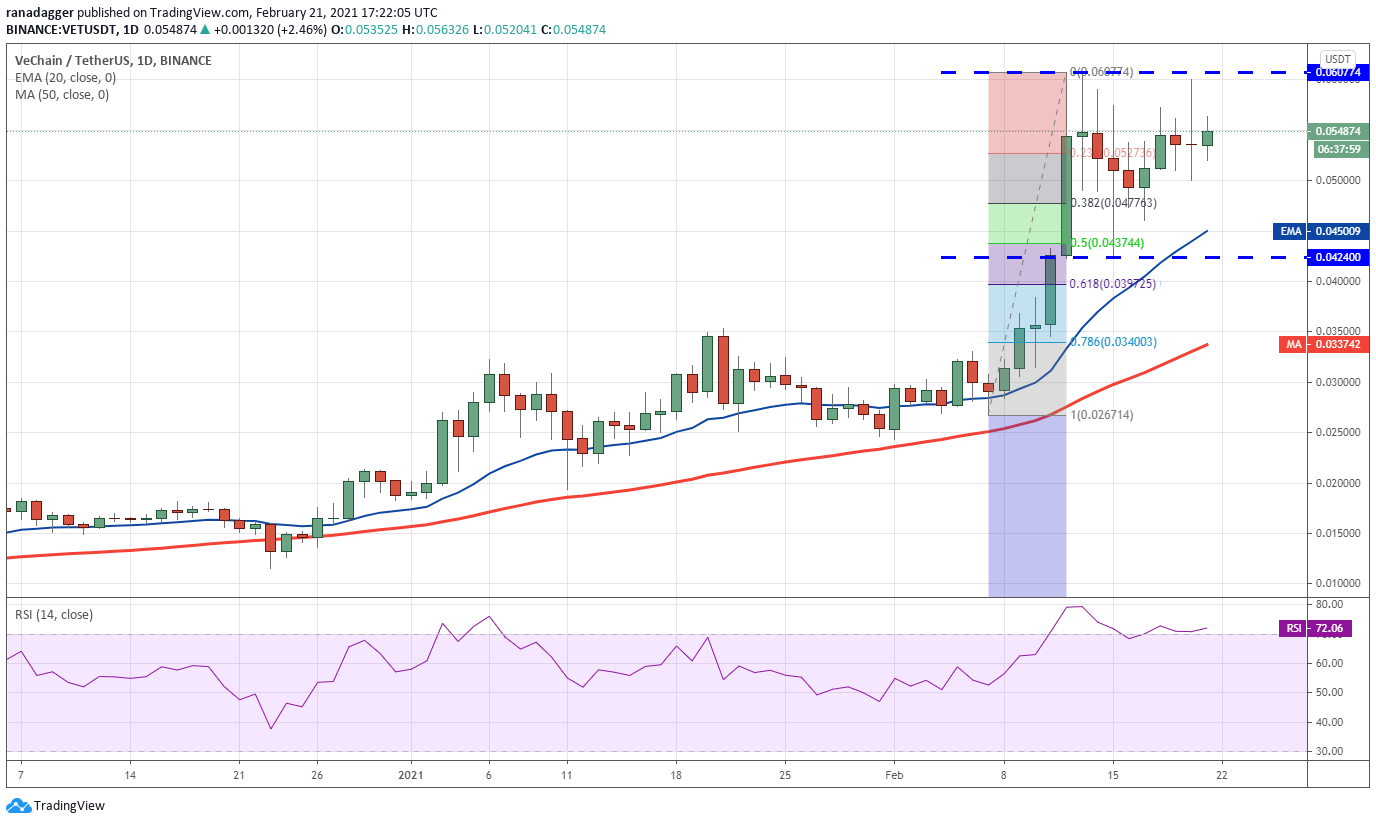 Contrary to this assumption, if the bulls fail to propel the price above the overhead resistance, the VET/USD pair may consolidate between $0.060774 and $0.0424 for a few more days. The trend will tilt in favor of the bears if they can sink and sustain the price below $0.0424. 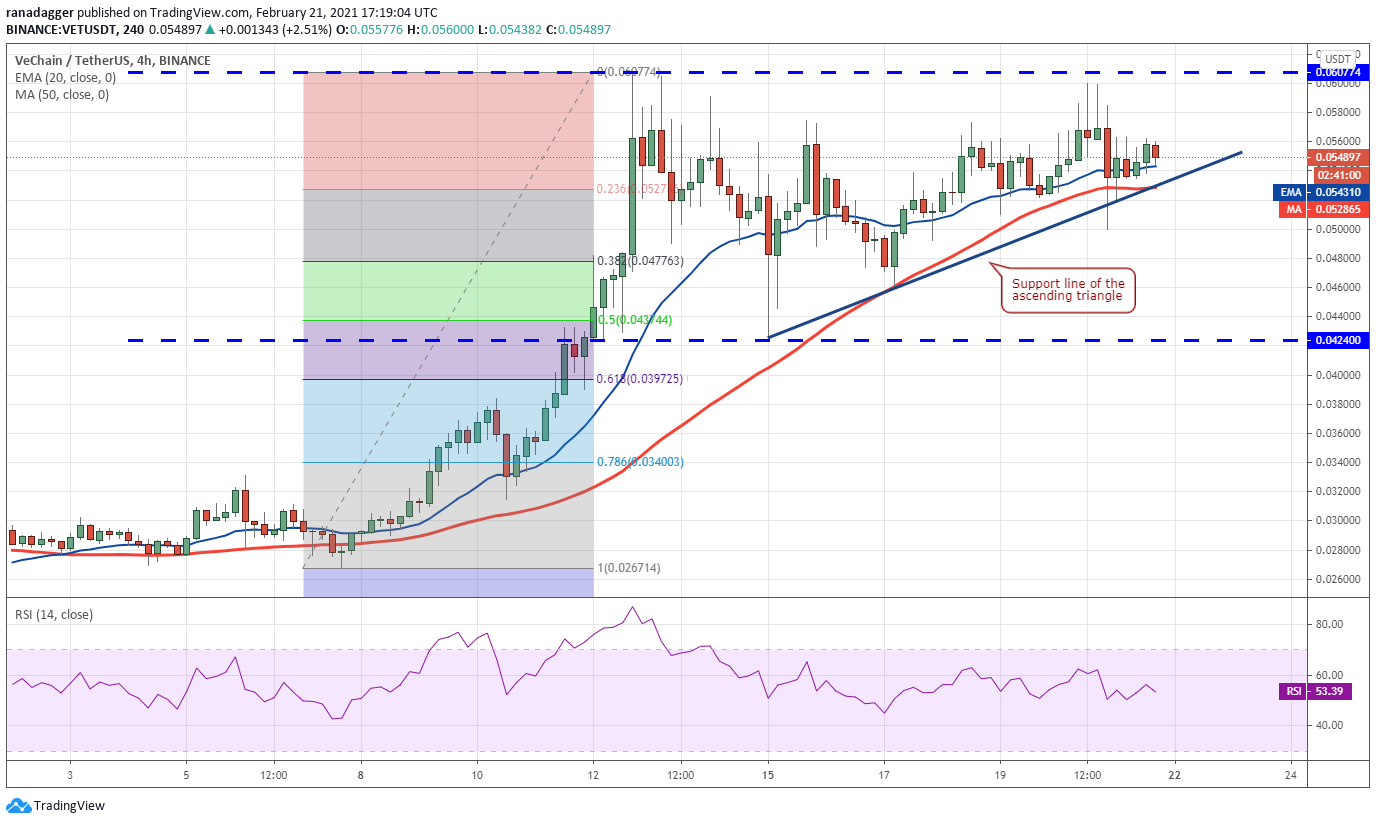 The 4-hour chart shows that both moving averages are flat and the RSI is just above the midpoint, indicating a balance between supply and demand.

However, the pair has formed an ascending triangle pattern that will complete on a breakout and close above $0.060774. This bullish setup has a pattern target of $0.079148.

On the other hand, if the price slips below the trendline of the ascending triangle, it will invalidate the pattern and open the doors for a fall to $0.042.