Between Jan. 30 and the early hours of Feb. 1, XRP price pumped 147%, reaching $0.76 which is its highest level in two months. The move seems to have been fueled by r/Satoshistreetbets, an off-shoot of r/Wallstreetbets.

It seems that speculative social media group-based investing is becoming a trend so let’s take a look at what triggers might have catalyzed the recent surge in XRP price. 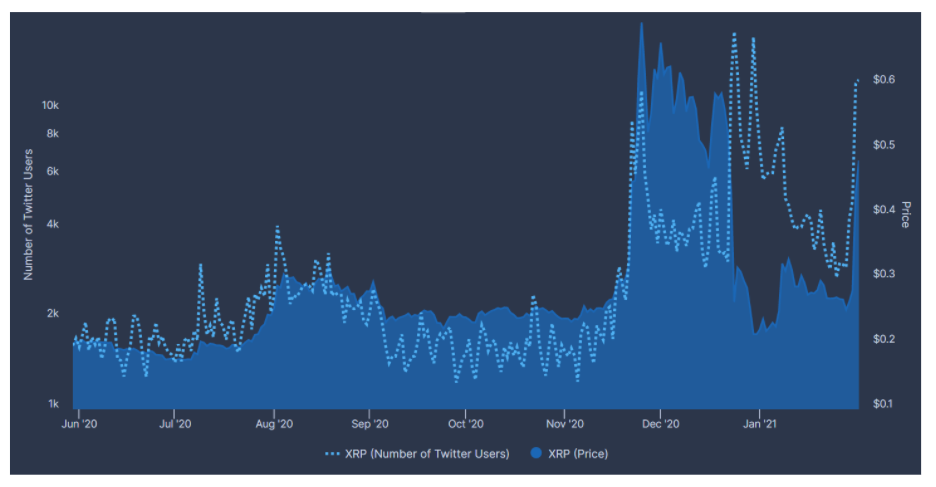 Data from TheTie, an alternative data provider focused on social analytics, shows just how significant the impact of active Twitter users has been on XRP price.

Even Gene Simmons, the legendary musician from the rock band, KISS, told his nearly 900,000 followers:

“Not recommending any of these to anyone. But yes, I also bought Dogecoin, XRP, and others. Make of it what you will.”

Was there short interest behind this move?

Knowing exactly what triggered the investors to crowd into XRP could uncover a set of criteria that may apply to other cryptocurrencies.

Hedge funds with sizeable short positions are what drew investors to GameStop and AMC stock. By coordinating a pump on these companies, buyers knew that would force short sellers to be liquidated and trigger the start of a strong rally.

Taking a look at Bitfinex’s long-to-short ratio shows that there’s currently $124 million total margin trades combining its USD and BTC based markets. Although that figure is up from $95 million a month ago, it’s more important to focus on the percentage favoring shorts. 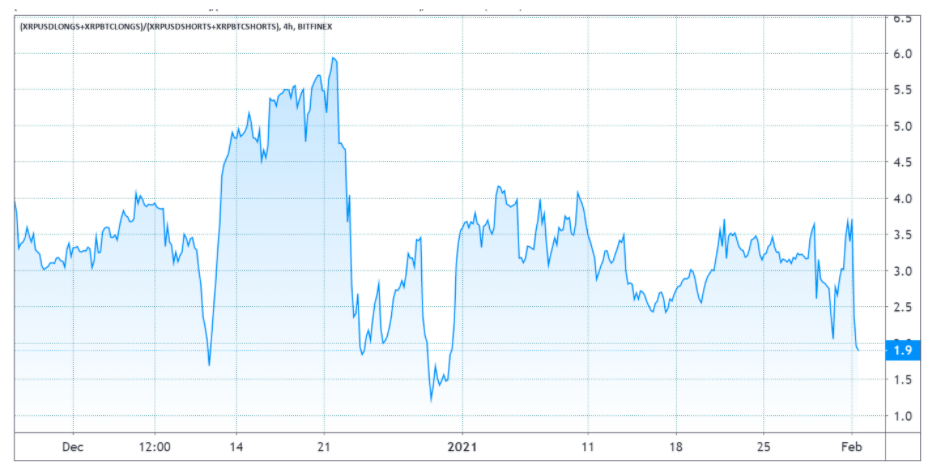 The ratio seen on Jan. 29 favored longs by 180%, and this is the opposite of what’s necessary for a short squeeze. Moreover, in nominal terms, those $25 million margin shorts were not significant to XRP’s $1.55 billion average daily volume.

On the other hand, futures markets held a $277 million open interest, which is flat from the previous month. But unlike margin markets, buyers and sellers are matched at all times. 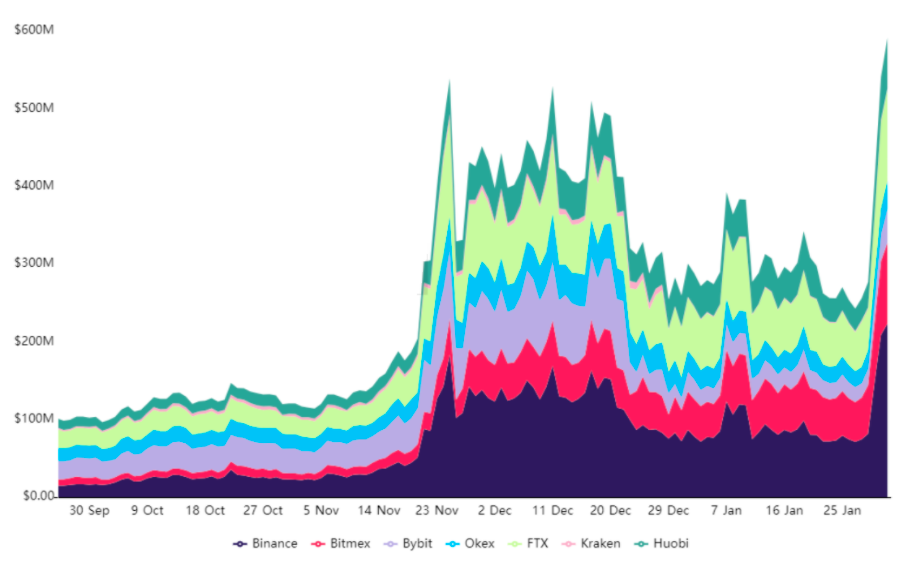 As depicted above, despite the liquidations caused by the recent 147% rally, XRP’s open interest surged in nominal terms due to its price appreciation. To understand whether those traders had been using excess leverage on either side, one should focus on the futures contracts funding rate.

When sellers (shorts) are the ones demanding more leverage, the funding rate goes negative. Therefore, those traders will be the ones paying up the fees. 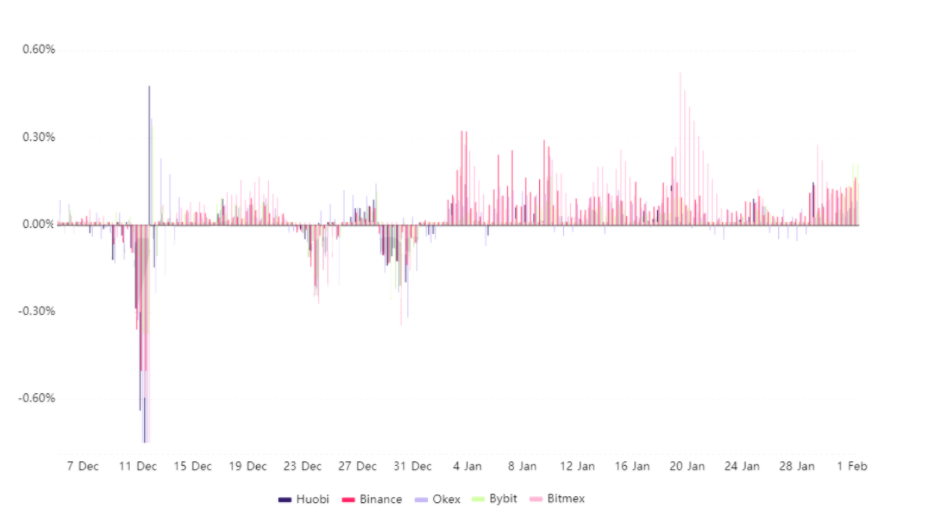 As shown above, buyers had been using more leverage. Albeit relatively steady over the past 30 days, the last time negative funding rates occurred was Dec. 24 and Dec. 29. Both dates mark local lows after substantial price corrections caused by the SEC lawsuit against XRP.

Therefore, it is safe to assume that r/Satoshibets did not pick XRP based on margin shorts nor futures leveraged trades.

Apart from being a sub-$10 coin, XRP was one of the most distant from its all-time high. It’s also important to consider that before its recent 1,000% pump, Dogecoin (DOGE) was also trading 90% below its $0.078 all-time high. 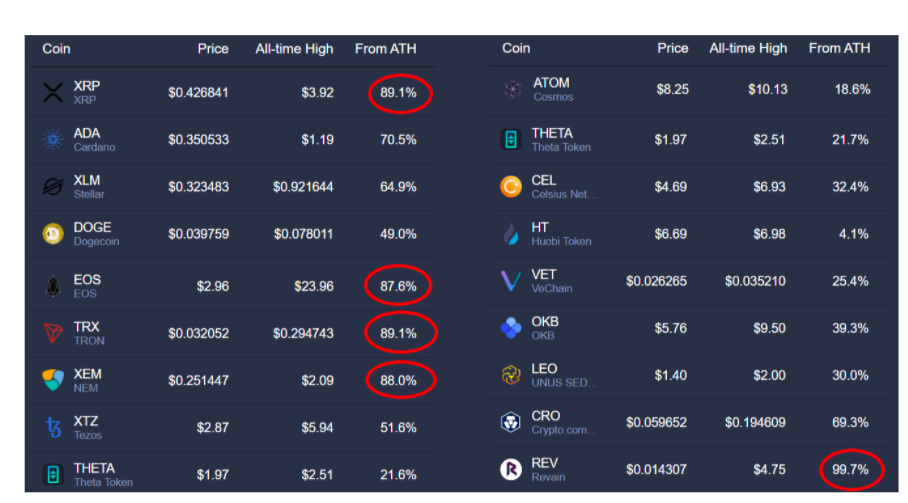 While it is indisputable that social investing groups have played some role in the recent rallies seen from Dogecoin, XRP, GameStop and AMC, the data do not validify the narrative that r/Satoshistreetbets chose to pump XRP because of the high level of shorts on the altcoin.