The sharp correction in Bitcoin (BTC) may have shaken out many leveraged traders, but the data shows whales and institutions aggressively purchased the dip and now bulls have shown they are determined to push Bitcoin price back above $40,000. The total crypto market capitalization has also recovered and surged back above $1 trillion. 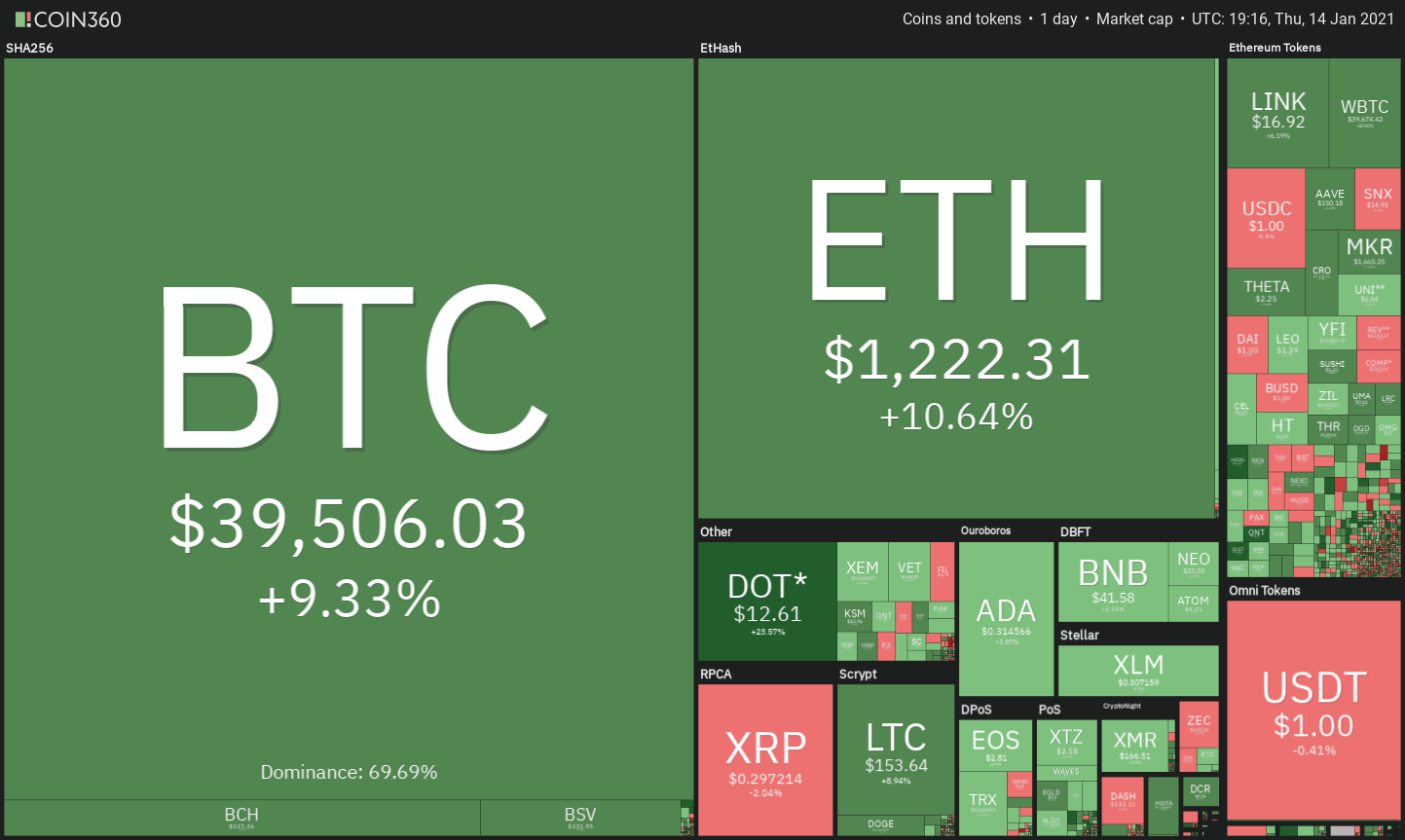 Pantera Capital founder and CEO Dan Morehead said he stands by his earlier prediction of $115,000 for Bitcoin by August of this year. Morehead believes China’s digital yuan developments may boost crypto adoption and prove to be a bullish trigger.

Several altcoins have also turned positive and are following Bitcoin higher. Let’s investigate the fundamental reasons for their rise in order to determine whether there are possible targets on the upside.

European Central Bank President Christine Lagarde recently reiterated her view that Bitcoin should be regulated of Bitcoin. Regulation can be a two-edged sword, and those against it have argued that it has repeatedly failed in traditional finance. Therefore, as voices for regulation grow, some investors may prefer privacy coins such as Zcash (ZEC).

The Zcash Foundation wants the community to increase shielded adoption and for applications to allow for transactions using shielded Zcash. To do that, the foundation plans to speed up the development of Zebra, a consensus-compatible Zcash node client written in Rust.

While Zcash is taking necessary steps to improve user adoption, the project is continuing to face heat due to its privacy tag. Recently crypto exchange Bittrex announced that it was delisting ZEC along with two other privacy coins starting on Jan. 15. Let’s see whether any of these developments are working in ZEC’s favor. 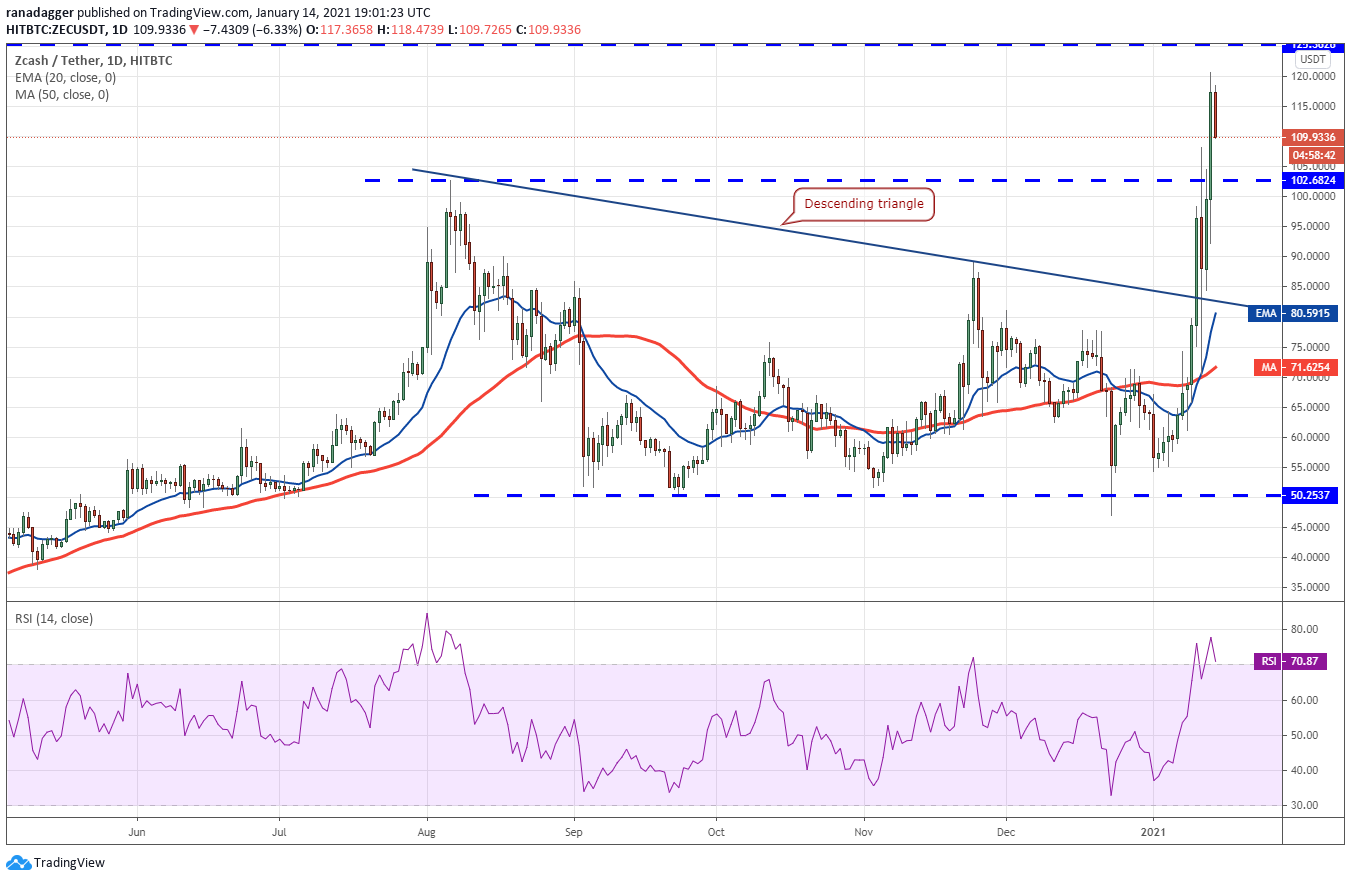 However, the bears are unlikely to give up easily and they are currently attempting to defend the $125.3626 resistance. The ZEC/USD pair could now retest the recent breakout level at $102.6824.

If the pair rebounds off this support, it will suggest that the level has flipped to support and this may be used as a launchpad for a break above $125.3626.

If the buyers succeed in achieving that, the pair could rally to $140 and then to $160. A breakout of this resistance could pave way for a rally to $220.

Contrary to this assumption, if the bears sink and sustain the price below $102.6824, the decline could extend to $84. Such a fall will suggest the momentum has weakened.

The recent crypto bull run has not only boosted Bitcoin’s price, it has also rewarded altcoins that offer solutions to the issues bogging down existing projects. Polkadot (DOT) aims to address interoperability and scalability issues and recently traders have pushed its price into the top-five cryptocurrencies by market capitalization. This has also benefited its cousin, Kusama (KSM).

The upcoming Substrate 3.0 release will bring Ethereum compatibility and it’s expected to launch in the first half of this year. The upgrade could further boost Polkadot’s popularity. Meanwhile, the Plasm network became the first parachain on Polkadot’s testnet parachain, Rococo V1. The same code will run on Kusama and a growing number of projects aiming to win the Polkadot parachain slots auction might first try out Kusama.

Although Kusama is its own unique network, its fortunes will closely follow the trajectory of Polkadot.

The charts show KSM in an uptrend and its price has risen from a Jan.11 intraday low at $57.877 to an intraday high at $85.239 today. This represents an impressive 47.27 % rally within four days. Both moving averages are sloping up and the relative strength index (RSI) is in the positive zone, indicating bulls are in control. 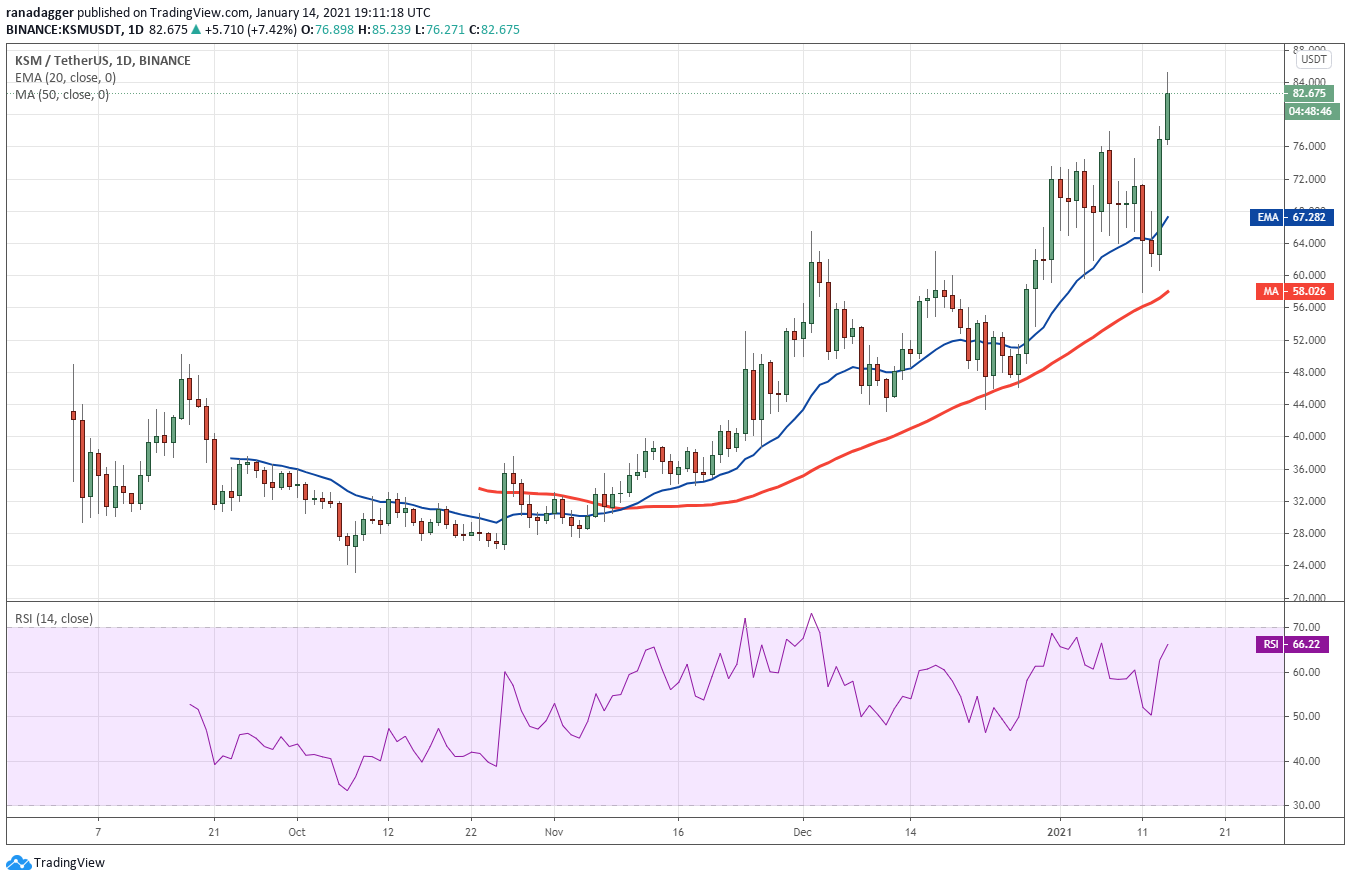 The bears had attempted to start a correction on Jan. 11 but the bulls aggressively defended the 50-day simple moving average ($58). This suggests strong demand at lower levels. The KSM/USD pair may rise to $88 and then to $100.

However, the long wick on today’s candlestick suggests selling at higher levels. If the bears pull the price below $76, the pair may drop to the 20-day exponential moving average ($67). A strong rebound off it will keep the upside targets intact.

On the other hand, a break below the 20-day EMA could result in a fall to the 50-day SMA. If this support cracks, it may signal a trend change.

Traders use leverage through derivatives in strong trending markets to maximize their gains. However, crypto markets can turn volatile, resulting in the quick liquidation of futures positions. Therefore, professional traders use options to limit their risk and participate in the rally while also hedging their futures positions. In fast-moving markets, demand for options are likely to remain high and this has benefited Hedget (HGET), the decentralized protocol for options trading.

When trading options, pricing is an important factor to consider for both the buyer and the seller. Hedget recently announced partnership with the Umbrella Network will provide volatility metrics from Genesis volatility to efficiently price DeFi options contracts. As more crypto traders understand and use options to hedge their risks, Hedget may continue to do well.

HGET has risen from $1.675 on Jan. 11 to an intraday high at $3.20 today, a gain of 91% within a short time. This rally has pushed the price above the downtrend line, indicating a possible trend change. 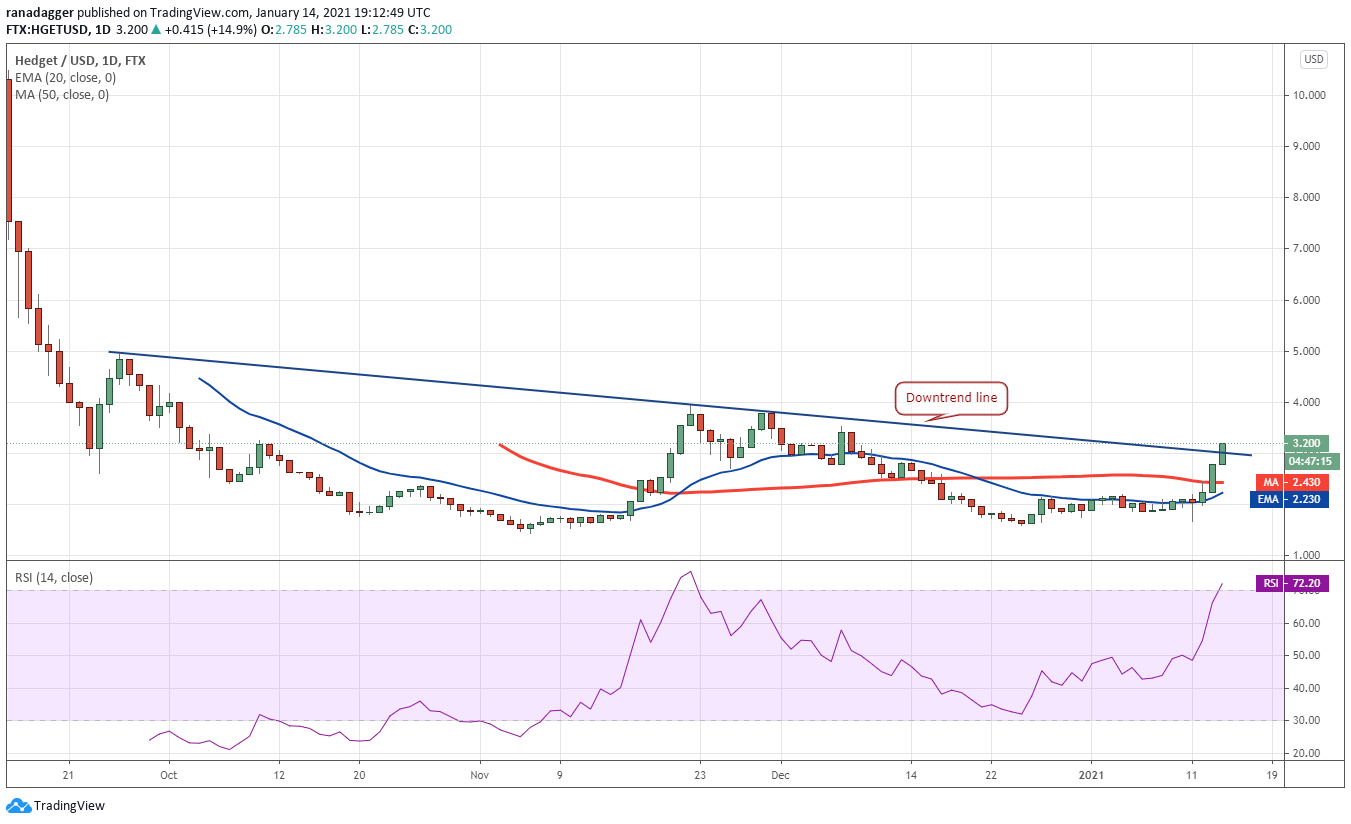 A break above $3.945 may push the price to $5. This level may act as a stiff resistance but if the bulls do not give up much ground, the up-move may resume. There are no significant resistance levels once $5 is crossed, hence the momentum may pick up.

The 20-day EMA ($2.23) has turned up and the RSI is in the overbought territory suggesting the path of least resistance is to the upside. This positive view will become invalid if the price dips below $2.75.